Early on Monday, Hong Kong embarked on a massive clean-up after a largely peaceful protest degenerated into violence across districts on the Kowloon peninsula, where protesters torched stores and sprayed graffiti on roads, amid skirmishes with police. 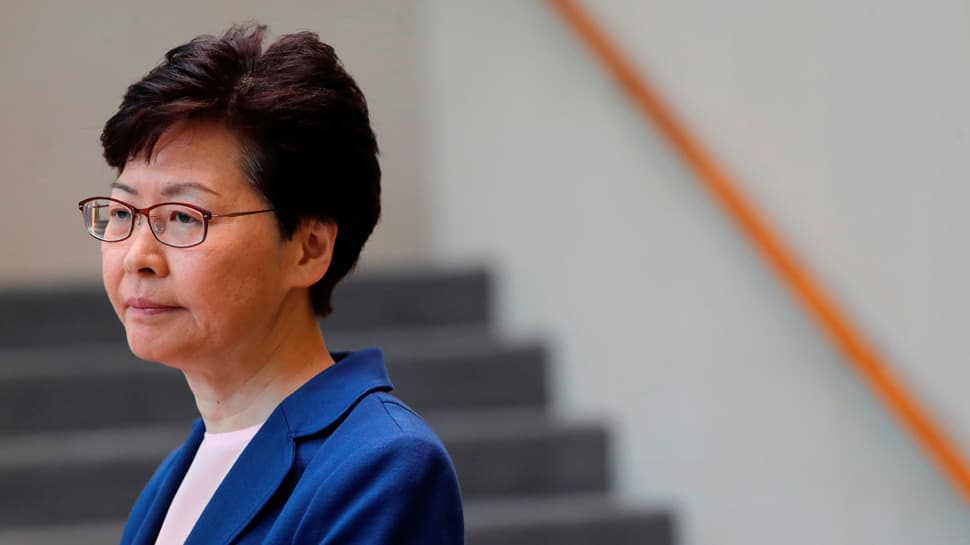 HONG KONG: Hong Kong`s embattled leader, Carrie Lam, leaves for a visit to Japan on Monday as the Chinese-ruled city struggles to recover from a night of violence in which tens of thousands took to the streets, with further protests planned later in the day. Lam is to attend Emperor Naruhito`s enthronement ceremony in Tokyo`s imperial palace on Tuesday and return home that evening.

Early on Monday, Hong Kong embarked on a massive clean-up after a largely peaceful protest degenerated into violence across districts on the Kowloon peninsula, where protesters torched stores and sprayed graffiti on roads, amid skirmishes with police. After two weeks of relative calm in the five-month-long political crisis, Sunday`s large turnout reflected strong support for the anti-government movement despite police branding the march illegal, because of concerns over public safety.

Families and the elderly took to the streets of the Asian financial hub in what began as a peaceful march, many wearing masks or carrying umbrellas to shield their faces, despite the threat of being arrested. However, a more radical faction of mainly young protesters later clashed with riot police. They targeted banks and other businesses perceived to be linked to China, damaging some storefronts and setting fires on the prime shopping and commercial street of Nathan Road in the heart of the Kowloon peninsula.

The events followed an annual policy speech last week by Beijing-backed Lam in which she did not address protesters` demands, but sought to ease tension with measures aimed at resolving a chronic housing shortage. Protesters say they will keep up pressure on the government to act on their demands for universal suffrage, an independent inquiry into police behaviour, amnesty for those charged, and an end to describing protesters as rioters.

Metro operator said it would shut the rural Yuen Long station by 2 p.m., ahead of a protest planned there later on Monday. Several subway entrances and exits would also be shut, and the entire network would close by 10 p.m., or two hours early, to allow time for the repair of facilities, the operator said.

In Sunday`s clashes, police used water cannon trucks to disperse protesters, spraying jets of blue dye into the crowds and sending hundreds fleeing. In one instance, a water cannon fired a jet towards the front gate of the Kowloon mosque, Hong Kong`s most important Islamic place of worship.

Blue dye still smeared the road as worshippers gathered for prayers on Monday, with many saying they did not understand why police had targeted the mosque as there had been few people nearby. The mosque entrance and front gate had been accidentally sprayed, police said in a statement. "Police respect religious freedom and will strive to protect all places of worship," they added.

The mosque incident is the first time the protests have affected religious groups, but the unrest has hammered much of Hong Kong`s business, retail and tourism sectors. Visitor numbers have plummeted as tourists stay away, further hampering an economy facing its first recession in a decade.

The government was trying its best to support small and medium-sized enterprises as the economy has been hit hard, Hong Kong`s financial secretary Paul Chan said on Sunday. "We are studying the launch of the third round of relief measures," he wrote on his blog. Businesses will probably have to foot the bill for the vandalism, as few had insurance for riot damage, industry insiders said.