In another first, the Hong Kong police deployed water cannon against protesters on Sunday, the BBC reported. 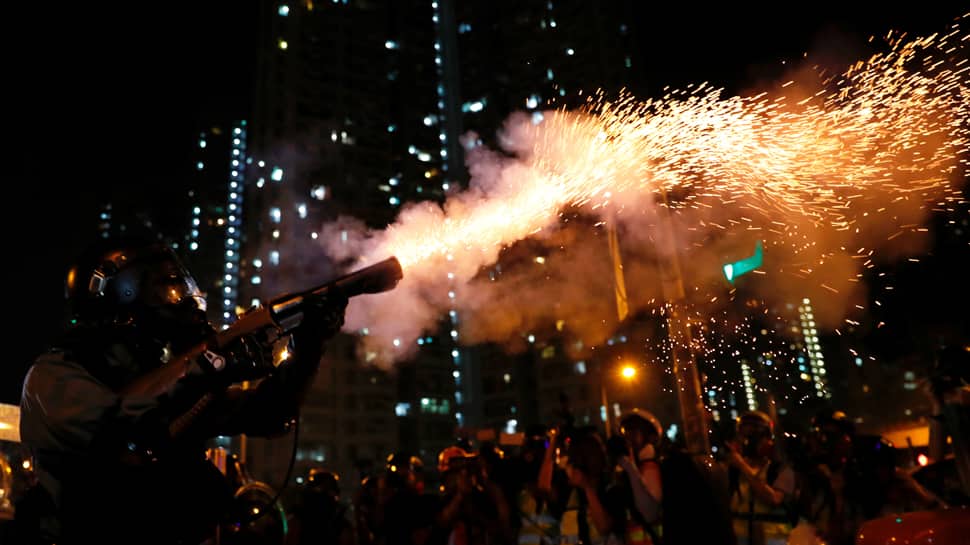 A Hong Kong police officer has fired a gunshot during protests, the first time a live round has been used since demonstrations broke out in June. Images showed several other officers also pointed guns at protesters who were chasing them with sticks and poles.

In another first, police deployed water cannon against protesters on Sunday, the BBC reported.

The protests began in the city's Tsuen Wan district and have since spread to the district of Tsim Sha Tsui.

Demonstrations were sparked by an extradition bill but have since morphed into broader anti-government protests, and developments on Sunday mark a serious escalation in the unrest.

Police told local media that the gunshot was fired as a warning to protesters, and that several officers had been taken to hospital as a result of the clashes.

But police Superintendent Leung Kwok-wing did not say where the shot was aimed.

During the melee, one older man was seen on his knees pleading with police not to shoot.

Before the scuffle, black-clad protesters had thrown projectiles at police, including bricks and petrol bombs.

Images on social media show the vehicles being driven through the streets of Tsuen Wan, where a group of demonstrators had set up roadblocks and dug up bricks from the pavement.

The vehicles are equipped with surveillance cameras and multiple water-cannon nozzles, and police had said they would only be used in the event of a "large-scale public disturbance".

Earlier this month, human rights group Amnesty International warned that the cannons could cause serious injuries and lead to further tensions.

There was another, more peaceful rally on Sunday comprised of a few hundred people, some of them family members of the police, who called for a political solution to the crisis.

Activists have criticised the police for being heavy-handed during the pro-democracy rallies.

Several people were hospitalised on Saturday after violent clashes.

The latest round of violence comes after an uneasy peace that lasted a little more than a week.