A series of protests for and against the city`s Communist Party rulers in Beijing is planned ahead of the 70th anniversary of the People`s Republic on Tuesday, including at the consulate of former colonial power Britain. 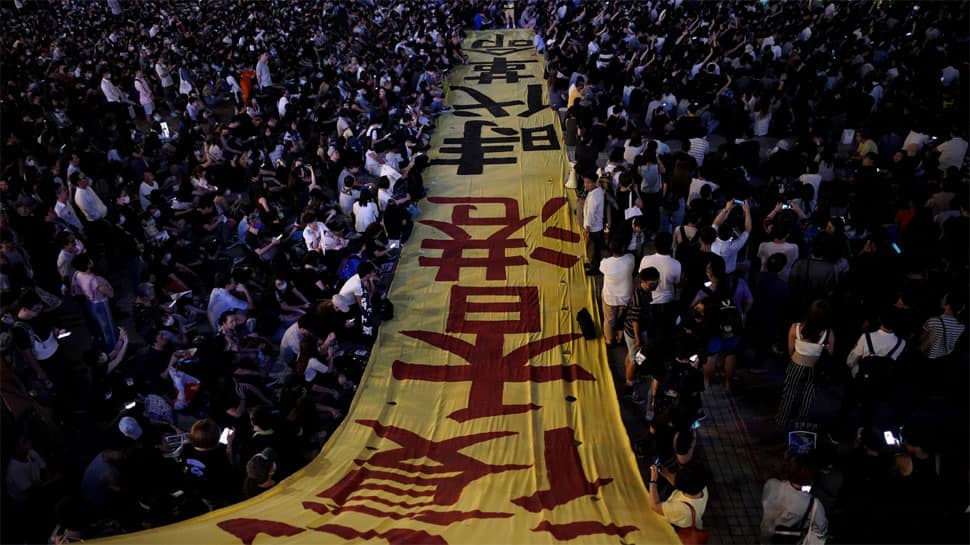 A series of protests for and against the city`s Communist Party rulers in Beijing is planned ahead of the 70th anniversary of the People`s Republic on Tuesday, including at the consulate of former colonial power Britain.

The protesters, many dressed all in black and wearing masks, took cover under umbrellas from the water cannon and fled after the demonstrations had taken a familiar turn into clashes with police as they have done regularly over more than three months.

They had smashed windows of government offices and tried to break in, shouting obscenities and daubing slogans on shop-fronts. They also shone lasers at a helicopter hovering overhead.

"A large group of violent protesters are occupying Harcourt Road. They also hurled bricks at police officers. Their acts pose a serious threat to the safety of everyone on site," police said in a statement.

The protesters, some frantically changing out of their tell-tale black clothes behind umbrellas on the way, later headed west towards Central, the main tourism and business district.

The narrow streets between towering office buildings are full of top-brand malls, banks and jewellery shops, and many stores had closed their shutters. But there was no trouble.

There were some loud, angry scuffles between residents and police as arrests were made in the upmarket shopping district of Causeway Bay, to the east of Central, but no major clashes.

Thousands, young and old, had gathered peacefully at a harbourside park to mark the fifth anniversary of the "Umbrella" pro-democracy movement which gridlocked streets for 79 days in 2014. A band was playing Beatles music as the violence erupted on the road next door.

The park sits in front of central government offices and the Legislative Council, both of which have come under attack before, sparking violent street battles with police.

"It’s a special day for Hong Kong protesters. We will stick together to fight for freedom," said Sam, 33, dressed in black and wearing a mask. "Most people think Hong Kong was dying after five years, but many people are still fighting for Hong Kong."

The MTR subway system closed entrances to some stations on Saturday to prevent fresh attacks.

"They are not our children," China supporter Yau Mei-kwang said of the frontline activists. "Because at this age, they should be studying, not running to the airport, hitting people, hitting the police, insulting people. That is not right."

A pro-democracy protester who only gave his name as Wong defended the use of violence. "We know that they will not listen if we rally in peace because we are not on the same level."

Protesters had spent the afternoon rebuilding "Lennon Walls" of anti-government graffiti, some of which were torn down by pro-Beijing activists last weekend.

Anti-government protesters are angry about what they see as creeping Chinese interference in Hong Kong, which returned to China in 1997 under a "one country, two systems" formula guaranteeing freedoms that are not enjoyed on the mainland.

China dismisses the accusation and has accused foreign governments, including the United States and Britain, of fanning anti-China sentiment. It has denounced the protests but said it has faith in the Hong Kong government to resolve the crisis without the use of PLA troops based in the territory.

Protesters appealed to Britain two weeks ago to rein in China and ensure it respects the city`s freedoms. They plan to do so again on Tuesday.

"WE STAND AS ONE"

Britain says it has a legal responsibility to ensure China abides by the 1984 Sino-British Joint Declaration. At the same time, it wants closer trade and investment cooperation with China after it leaves the European Union at the end of October.

Protests were sparked in June by planned legislation, since withdrawn, that would have allowed the extradition of suspected criminals to mainland China. But they have since expanded into a broader pro-democracy movement.

One of the leaders of the protests, the bespectacled Joshua Wong, 22, said on Saturday he would run for local district council elections in November.
"It`s time to let Emperor Xi (Chinese President Xi Jinping) be aware that now is our battle," he told reporters. "We stand in solidarity, we stand as one."

Official festivities for National Day have been scaled back, with authorities keen to avoid embarrassing Beijing just as Xi seeks to project an image of national strength and unity.