The weekend of August 17 and 18 was the calmest weekend protest since the latest demonstrations against perceived creeping Beijing influence in the former British colony began. 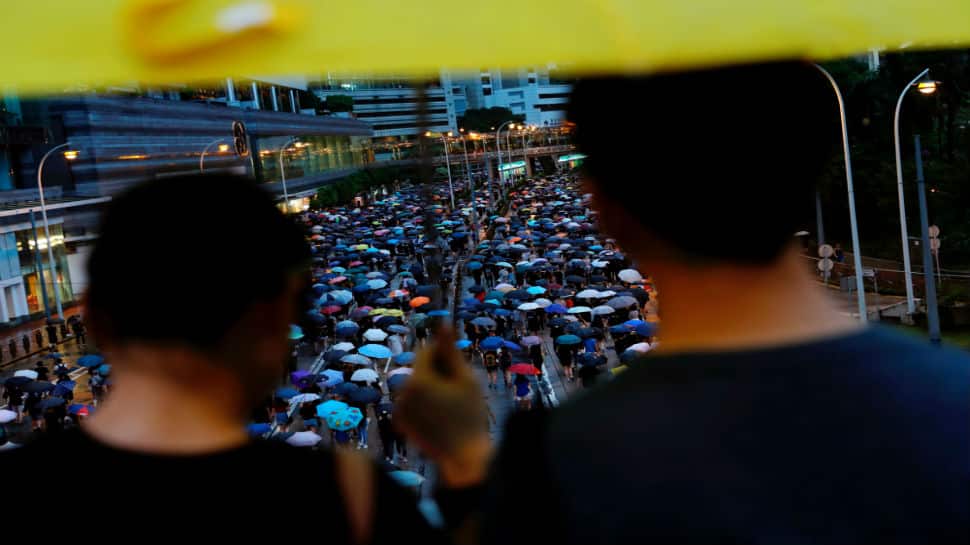 Hong Kong: Hundreds of thousands of anti-government protesters rallied peacefully in Hong Kong on Sunday, filling major thoroughfares under torrential downpours in the eleventh week of what have been often violent demonstrations in the Asian financial hub.

Sunday's turnout showed that the movement still has broad-based support despite the ugly scenes witnessed in recent days when protesters occupied the Chinese-ruled city`s airport, a move for which some activists apologised.

It was the calmest weekend protest since the latest demonstrations against perceived creeping Beijing influence in the former British colony began.

"They’ve been telling everyone we`re rioters. The march today is to show everyone we are not," said a 23-year-old named Chris, who works in marketing and was dressed all in black, including a scarf covering his face and baseball cap.

"It does not mean we won’t keep fighting. We will do whatever is necessary to win, but today we take a break, then we reassess."

One protester shouted at others who were jeering at police, "Today is a peaceful march! Don’t fall into the trap! The world is watching us," prompting the group to move on.

Late in the evening, some demonstrators were urging others to go home and rest.

Anger over a now-suspended bill that would allow criminal suspects in Hong Kong to be extradited to mainland China erupted in June, but the unrest has been fuelled by broader worries about the erosion of freedoms guaranteed under the "one country, two systems" formula put in place after Hong Kong`s return to Chinese rule in 1997, including an independent judiciary and right to protest.

The protests present one of the biggest challenges for Chinese President Xi Jinping since he came to power in 2012, with the ruling Communist Party preparing to mark the 70th anniversary of the founding of the People`s Republic on October 1.

Protesters held aloft placards with slogans including "Free Hong Kong!" and "Democracy now!" and umbrellas to shield them from the sometimes heavy rain.

Some aimed green lasers at police and government buildings. The crowd in Causeway Bay`s leafy Victoria Park, where the rally started, included elderly people and young families, with some parents carrying toddlers.

Despite rally organisers not having permission to march, the park could not accommodate the crowd, which thronged nearby streets. Many protesters headed towards the city`s financial centre, chanting for the city`s Beijing-backed leader, Carrie Lam, to step down.

It was impossible to put an exact figure on the number of protesters. The organisers put the number at 1.7 million, adding they had applied for permission to march to the Hong Kong Liaison Office, Beijing`s main representative body in the city, on the last day of the month.

Police estimated there were 128,000 in Victoria Park at the height of the protest.

"It's bloody hot and it`s raining. It`s a torture just to turn up, frankly. But we have to be here because we have no other choice," said a 24-year-old student named Jonathan.

"We have to continue until the government finally shows us the respect that we deserve."

A government spokesman said the protests were generally peaceful, but they had disrupted traffic badly.

"The most important thing at present is to restore social order as soon as possible," he said. "When everything is calm, the government will engage in a sincere dialogue with the public to fix the social rifts and rebuild social harmony."

Aside from Lam`s resignation, demonstrators are seeking complete withdrawal of the extradition bill, a halt to descriptions of the protests as "rioting", a waiver of charges against those arrested, an independent inquiry and resumption of political reform.

"WE WILL STILL FIGHT"

"When we were young, we didn’t think about it. But my son tells me: After 2047, what will happen to me?," said a history teacher named Poon, referring to the year when the 50-year agreement enshrining Hong Kong`s separate system will lapse.

Police have come under criticism for using increasingly aggressive tactics to break up demonstrations and on Sunday some people handed out balloons resembling eyeballs, a reference to the injury suffered by a female medic hit by a pellet round in the eye.

On Saturday, however, a demonstration in support of the government attracted what organisers said was 476,000 people, although police put the number of attendees at 108,000.

Beijing has struck an increasingly strident tone over the protests, accusing foreign countries including the United States of fomenting unrest.

Scenes of Chinese paramilitary troops training this past week at a stadium in the city of Shenzhen, which borders Hong Kong, gave a clear warning that mainland intervention by force is possible.

Last week, protesters who occupied the terminal at Hong Kong`s airport forced the cancellation of nearly 1,000 flights and detained two men they thought were pro-government sympathisers, prompting Beijing to liken the behaviour to terrorism.

"We are Hong Kongers. We are here for our future. We feel for the teenagers," said Frances Chan, 60, a retired journalist attending Sunday`s rally.

She said only a few protesters had used violence, sparingly, brought on by pressure from the authorities.

"Actually, we want peace and freedom," she said.