Mobile banners on the street just outside White House highlighted the plight of people in Balochistan and exposed Pakistan's follies. 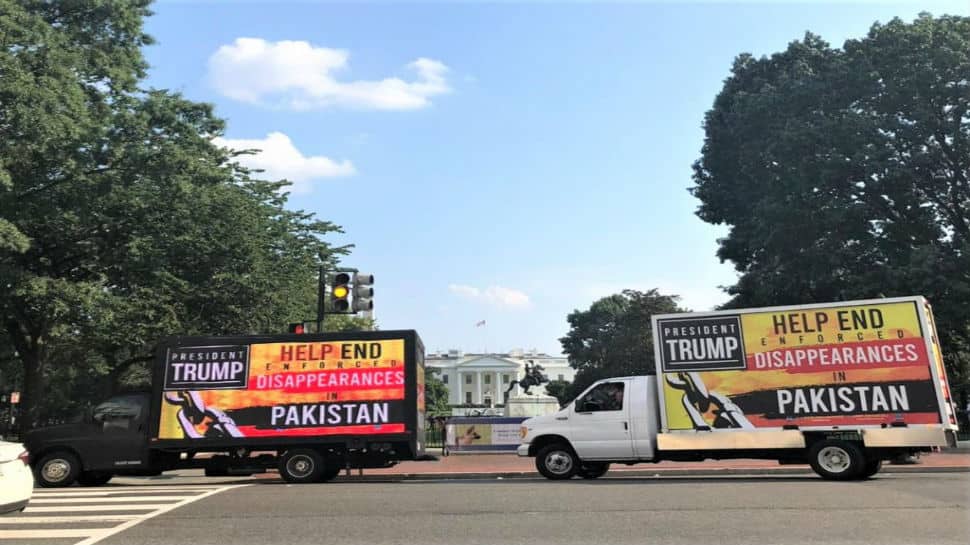 This photo was tweeted by @WorldBalochOrg
Share:
Written By:

There is no end to the embarrassment Imran Khan has had to face during his short stay in Washington. While his 'Naya Pakistan' speech at Capital One Arena on Sunday was marred by protests from Baloch activists, his Monday visit to the White House to meet Donald Trump was met with pro-Balochistan mobile banners just outside the official residence of the US President.

Baloch activists have pushed their protests to top gear to highlight the plight of locals in Pakistan's Balochistan province. Urging Trump to ensure Pakistan brings an end to enforced disappearences here, activists have trailed Imran in what is his maiden US visit as PM. Mobile banners have played a key role in spreading messages of awareness and have been doing the rounds of Washington city for several days now. On Monday morning, several of these banners took the roads just outside the White House and it is unlikely that Imran would have missed them on his drive to here from Pakistan House.

Imran left Pakistan House at around 11am local time (8.30 pm IST) and reached the White House at 11.30am (9pm IST). He has been staying at the residence of the Pakistan Ambassador in what his attempt at austerity. And while he is seeking to restore Pakistan-US ties which have deteriorated in recent years - mainly due to Pakistan's support to terrorists, Baloch activists have been trailing him in their efforts to highlight Pakistan's atrocities and human rights violation.

Joining the Baloch activists have been activists representing Pakistan's Sindhi community who also have similar complaints. Members of Muttahida Qasmi Movement (MQM) and other minority groups have also held protests.

While the Pakistani media has completely overlooked these protests, the noise made has had reverberations in Washington with locals increasingly taking note of the campaign launched.