According to IS, the attacks were carried out by Abu Ubaida, Abu al-Mukhtar, Abu Khalil, Abu Hamza, Abu al-Barra, Abu Muhammad and Abu Abdullah. 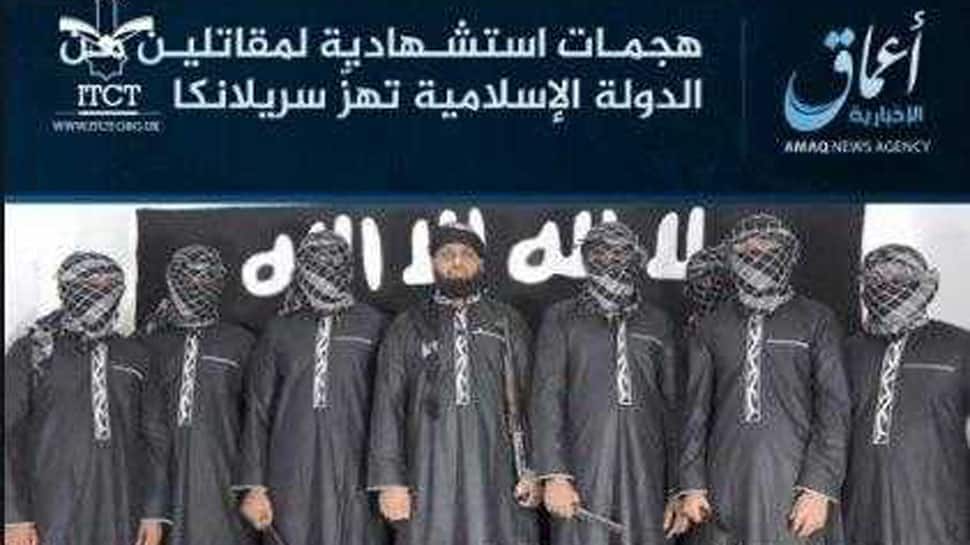 The Islamic State (IS) on Tuesday claimed responsibility for Sunday's serial bomb blasts in Sri Lankan capital Colombo that killed over 300 people and left around 450 injured.

Later in the day, the terror group released a picture of eight terrorists on 'Amaq' news agency.

Site Intelligence Group, which monitors the activities of Islamic terror groups across the world, said, "The executors of the attack that targeted citizens of coalition states and Christians in Sri Lanka two days ago were with the group." 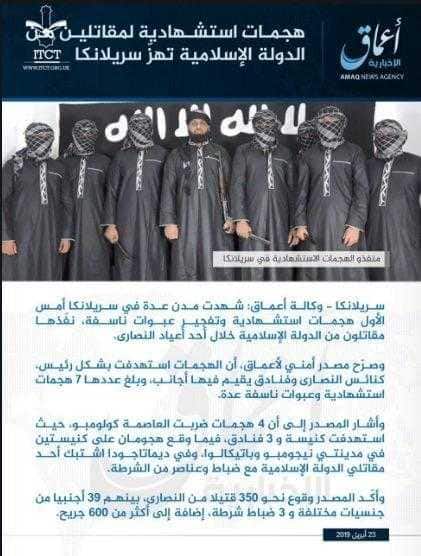 Besides releasing the pictures of the terrorists involved in the deadly attacks, IS also revealed their names. According to IS, the attacks were carried out by Abu Ubaida, Abu al-Mukhtar, Abu Khalil, Abu Hamza, Abu al-Barra, Abu Muhammad and Abu Abdullah.

The terror group, however, did not share much information about the eighth man who is also seen standing in the picture. IS has claimed that the bombings killed over 350 people and the men in the picture were "the commando brothers in Sri Lanka" who were involved in the execution of the blasts.

The IS said that the fighters of the group went to the churches and hotels that were filled with Christians on Sunday. Abu Hamza attacked Antony Church in Colombo and blew himself up in the middle of the people. Abu Khalil went to St Sebastian Church church in Negombo and detonated the bomb at a time when the people were celebrating Easter.

The IS said in its statement that Abu Muhammad went to Zion Church in Batticaloa and exploded the bombs. Abu Ubaida, Abu al-Barra and Abu al-Mukhtar attacked five-star hotels Shangri-La, Cinnamon and Kingsbury respectively in the heart of Colombo. The statement released by IS said that the trio first exploded some bombs and then detonated their suicide vests.

The IS also said that Abu Abdullah confronted police in Dematogoda and claimed the lives of three police officers.

SITE Intelligence Group Director Rita Katz tweeted that the detail given by the IS in its communique sends a clear message that the group was involved in carrying out the dastardly attacks.

Earlier, the Sri Lankan government had said that local Islamist Group National Thowheeth Jama'ath (NTJ) may have been involved in the attacks. Sri Lankan authorities have arrested at least 40 suspects in connection with the deadly terrorist attacks.

A series of explosions rocked three churches and three luxury hotels in Colombo on Easter Sunday, ending a decade of peace in the island nation following the decimation of LTTE.

Donald Trump to make state visit to Britain in June