Shocking and brutal attack in France: Knife-wielding man shouted "Allahu Akbar", beheaded a woman and killed two other people in Nice on Thursday. 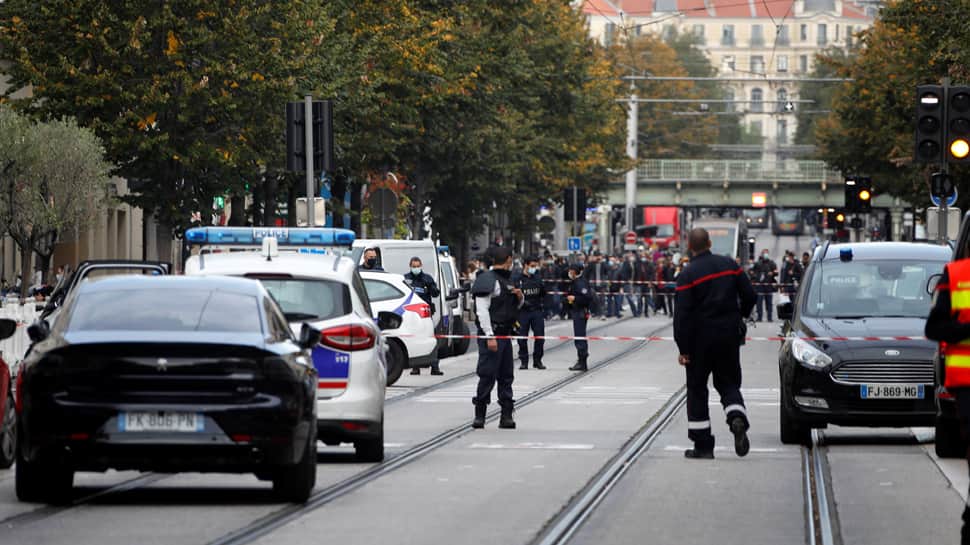 In yet another shocking and brutal attack in France, a knife-wielding man shouting "Allahu Akbar" beheaded a woman and killed two other people in a suspected terrorist attack at a church in Nice on Thursday, police and officials said.

Police said three people were confirmed to have died in the attack and several were injured. A police source said a woman was decapitated. French politician Marine Le Pen also spoke of a decapitation having occurred in the attack.

Man detained: "The suspected knife attacker was shot by police while being detained, he is on his way to the hospital, he is alive," Estrosi told reporters.

France on Islamo-fascism: "Enough is enough," Estrosi said. "It`s time now for France to exonerate itself from the laws of peace in order to definitively wipe out Islamo-fascism from our territory." Estrosi said the victims had been killed in a "horrible way". "The methods match, without doubt, those used against the brave teacher in Conflans Sainte Honorine, Samuel Paty," he said, referring to a French teacher beheaded earlier this month in an attack in a suburb of Paris.

Situation in Nice: Estrosi said a woman had tried to escape from inside the church and had fled into a bar opposite the building. The French anti-terrorism prosecutor`s department said it had been asked to investigate the attack. Reuters journalists at the scene said police armed with automatic weapons had put up a security cordon around the church, which is on Nice`s Jean Medecin Avenue, the city`s main shopping thoroughfare. Ambulances and fire service vehicles were also at the scene.

Beheading of Samuel Paty: The attack comes while France is still reeling from the beheading earlier in October of French middle school teacher Samuel Paty by a man of Chechen origin in a suburb of Paris after he had shown caricatures of Prophet Mohammad. The 47-year-old Paty was beheaded by an 18-year-old Chechen Muslim.

The attacker had said he wanted to punish Paty for showing pupils cartoons of the Prophet Mohammad in a civics lesson. It was not immediately clear if Thursday`s attack was connected to the cartoons, which Muslims consider to be blasphemous.

India stands with France: In a development that shows the closeness between India and France, Delhi has come in full support for French President Emmanuel Macron who is facing uncharitable remarks particularly after by Turkish President Recep Tayyip Erdogan. Turkish President has been taking swipes at the French President after the latter called for action over what he called "Islamist separatism”.

The Ministry of External Affairs in a statement on October 28 had said, "We strongly deplore the personal attacks in unacceptable language on President Emmanuel Macron in violation of the most basic standards of international discourse." The MEA "condemned" the "brutal terrorist attack" that took the life of a French teacher in a "gruesome manner that has shocked the world" and offered "condolences to his family and the people of France".

"We also condemn the brutal terrorist attack that took the life of a French teacher in a gruesome manner that has shocked the world. We offer our condolences to his family and the people of France. There is no justification for terrorism for any reason or under any circumstance," the statement added.

The French envoy to India, Emmanuel Lenain, thanked MEA for the support tweeting, "France and India can always count on each other in the fight against terrorism".

#StandWithFrance: Interestingly, earlier this week saw #StandWithFrance trending on Twitter. In fact, according to some French media outlets, the hashtag actually started in India. India and France have increased engagement in the past few years, and in fact, the Foreign Secretary Harsh Vardhan Shringla will be in Paris this weekend.

Other countries also support France: Besides India, Netherland's Prime Minister Mark Rutte has come out in full support of France. He tweeted, "President Erdogan’s words addressing President Emmanuel Macron are unacceptable. The Netherlands stands firmly with France and for the collective values of the European Union. For the freedom of speech and against extremism and radicalism."

The Canadian Foreign minister also came out in support of France. Canadian FM tweeted, We stand in solidarity with our French friends. Turkey’s recent comments about France are totally unacceptable. We must return to respectful diplomatic exchanges. We will always stand together to defend freedom of expression with respect."

Some other attacks in France:

* Two people were stabbed and wounded in Paris on Sept. 25 near the former offices of the Charlie Hebdo satirical magazine, where Islamist militants carried out a deadly attack in 2015. A man originally from Pakistan was arrested over the attack.

*Oct. 3, 2019 - Mickael Harpon, 45, an IT specialist with security clearance to work in the Paris police headquarters, killed three police officers and one civilian employee before being shot dead by police. He had converted to Islam 10 years earlier.

* March 23, 2018 - A gunman killed three people in southwestern France after holding up a car, firing on police and taking hostages in a supermarket. Security forces stormed the building and killed him.

*July 26, 2016 - Two attackers killed a priest and seriously wounded another hostage in a church in northern France before being shot dead by police. Francois Hollande, France`s president at the time, said the hostage-takers had pledged allegiance to Islamic State.

* July 14, 2016 - A gunman drove a heavy truck into a crowd celebrating Bastille Day in the French city of Nice, killing 86 people and injuring scores more in an attack claimed by Islamic State. The attacker was identified as a Tunisian-born Frenchman.

* June 14, 2016 - A Frenchman of Moroccan origin stabbed a police commander to death outside his home in a Paris suburb and killed his partner, who also worked for the police. The attacker told police he was answering an appeal by Islamic State.

* Nov. 13, 2015 - Paris was rocked by multiple gun and bomb attacks on entertainment sites around the city, in which 130 people were killed and 368 wounded. Islamic State said it was responsible. Two of the 10 known perpetrators were Belgian citizens and three were French.

* Jan. 7-9, 2015 - Two Islamist militant gunmen broke into satirical weekly Charlie Hebdo`s offices on Jan. 7 and killed 12 people. Another militant killed a policewoman the next day and took hostages at a supermarket on Jan. 9, killing four before police shot him dead.