New steps being taken not because 'Modi hai to Mumkin hai', but due to 130 crore Indians, says PM

Prime Minister Narendra Modi will be addressing the Indian diaspora on Friday afternoon in France from the United Nations Educational, Scientific and Cultural Organization (UNESCO) headquarters as the first leg of his three-nation visit comes to an end. 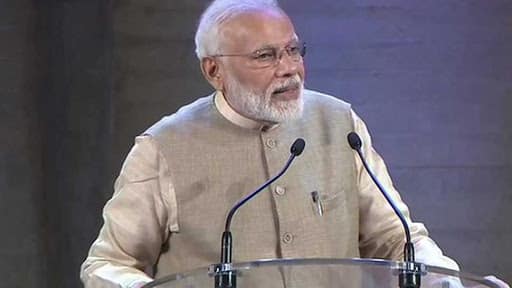 Paris: Prime Minister Narendra Modi will be addressing the Indian diaspora on Friday afternoon in France from the United Nations Educational, Scientific and Cultural Organization (UNESCO) headquarters as the first leg of his three-nation visit comes to an end.

Ahead of PM Narendra Modi's address, Indians living in France lined up outside the UNESCO building, news agency ANI reported.

Trump to discuss Kashmir issue with PM Modi at G7 Summit in FrancePM Modi to leave for UAE on two-day visit from France on Friday, here's his scheduleLive TVFrom Defence to Kashmir, France backs India as PM Modi meets Macron

India and France have lived and fought for each other. Both countries have faced enemies from side to side. This is the land where 9000 Indian soldiers sacrificed their lives while fighting for the side of humanity with the soldiers of France in the First World War: PM Modi.

PM Modi talks about Article 370. Says, it took us 70 years to remove a temporary provision.

I am told that the Ganpati Festival has become the main feature of the Parisian cultural calendar. Paris transforms into mini India on this day. A few days from now, the echo of Ganpati Bappa Maurya will also be heard here: PM

Another feature of Indo-French relations is that we face challenges with concrete action. There is a lot of talk of climate change in the world, but little is seen happening in action. We initiated the International Solar Alliance together with President Macron: PM

Today, when India and France are closely cooperating in fighting the great dangers of the world, this is also the reason for this shared value. Whether it is terrorism or climate change, we have well-accepted our collective responsibility to protect the values of democracy from these threats, says PM Modi.

When I speak about INFRA here it means IN - India, FRA - France, says PM Modi.

We have fought Imperialism, Fascism, and Extremism not only in India but also on the soil of France. Our friendship is built on solid ideals. The character of the two countries is formed by the shared values of 'Liberty, Equality and Fraternity': PM Modi in France.

As soon as the new government was formed, a new ministry was created for water issues, which would holistically look at all the water-related topics. It was also decided to provide pension facilities to poor farmers and traders. The inhuman practice of triple talaq has been abolished: PM.

New steps are taken for New India not because of "Modi hai to Mumkin hai", but due to the power of 130 crore Indians, says PM Modi.

Within 75 days of the new government coming to power, we took many strong decisions: PM.

In new India, the way in which action is being taken against corruption, nepotism, the loot of people's money, terrorism, this has never happened before, says PM in France.

India has set a record of opening new bank accounts in a given period of time, which has not been achieved by any other country: PM Modi in France.

New India's focus is on ease of doing business, which could also ensure ease of living for its citizens, says PM.

The massive mandate that was given to the NDA government in the recent elections is a mandate for a ‘New India’, says PM.

France is a football-loving nation. I have come to a nation of football lovers, you very well know the importance of a goal, that is the ultimate achievement: PM. In the last 5 years, we have set goals which were earlier considered impossible to fulfill, adds PM.

India is working on the biggest healthcare scheme and plans to implement the scheme all over the country by 2025: PM in France.

Ties between India and France are centuries old. India will lead the world in the 21st century, says PM Modi in France.

I salute all those including the great Indian nuclear physicist Homi Bhaba, who lost their lives in the two crashes ( Air India plane crashes, in 1950 and 1966 in France's Saint Gervais), says PM Modi.

I am thankful to the France government, President Macaron for welcoming me so that I could meet you all here, says PM Modi.

PM Modi says, "When France won the Football World Cup, India celebrated their victory with equal joy. In times of tragedy as well, India has stood strong with the French country."

PM Narendra Modi begins addressing the Indian diaspora at the UNESCO headquaters in France. PM says that India and France's friendship has been strong since decades. There is no issue on which both countries have not agreed ever.