London: Over 100 arrested, 10 officers injured as thousands turn up for “Kill the Bill” protests

The British capital was swarmed by thousands of demonstrators as a number of protests took place simultaneously. Many were protesting the British government`s proposed Police, Crime, Sentencing and Courts Bill. 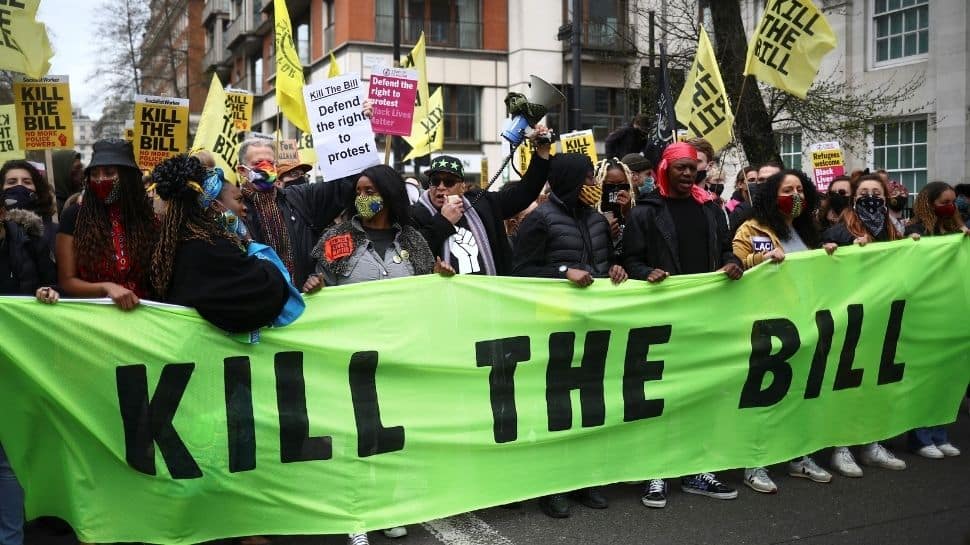 London: London police said on Sunday (March 4) that more than 100 people were arrested after protests were staged against the British government's new Crime Bill in central London on Saturday (April 3).

Earlier on Sunday, London police said that 10 officers were left with minor injuries after police and protesters clashed in central London on Saturday, the Xinhua news agency reported.

The British capital was swarmed by thousands of demonstrators as a number of protests took place simultaneously. Many were protesting the British government`s proposed Police, Crime, Sentencing and Courts Bill.

If passed, the legislation would give police in England and Wales more powers to impose conditions on non-violent protests, including those deemed too noisy or a nuisance, with those convicted liable to fines or jail terms.

"Kill the Bill" demonstrators were joined by Extinction Rebellion and anti-lockdown protesters. The anti-lockdown rebels were supported by Piers Corbyn, brother of former Labour leader Jeremy Corbyn, a London-based newspaper reported on Sunday.

Thousands turned up for the "Kill the Bill" protest alone, marching from Hyde Park to Westminster. The protesters walked past Buckingham Palace and down to Parliament Square, opposite the Houses of Parliament.

Covid-19 regulations have since been relaxed and protests are now lawful in England and Wales. However, protest organisers must submit a risk assessment and take steps to limit the potential transmission of coronavirus, according to a newspaper.

The coronavirus reproduction number, or R-value, in England is between 0.8 and one, according to the latest government figures. This is compared to a figure of between 0.7 and 0.9 for the whole of Britain last week.

The latest government figures showed that more than 31.5 million people have received their first dose of the Covid-19 vaccine in Britain.

From April 12, non-essential retail, as well as restaurants and pubs, if serving people outdoors, will be allowed to reopen in England.

On February 22, British Prime Minister Boris Johnson announced his roadmap exiting the lockdown, the third of its kind since the start of the pandemic. The four-step plan is expected to see all legal restrictions in England being removed by mid-June.

Experts have warned Britain is "still not out of the woods" amid concerns over new variants and the third wave of the pandemic in the European continent.

To bring life back to normal, countries such as Britain, China, Russia, the United States as well as the European Union have been racing against time to roll out coronavirus vaccines.