Malabar 2019: Indian Navy takes part in military drills with Japan and US forces 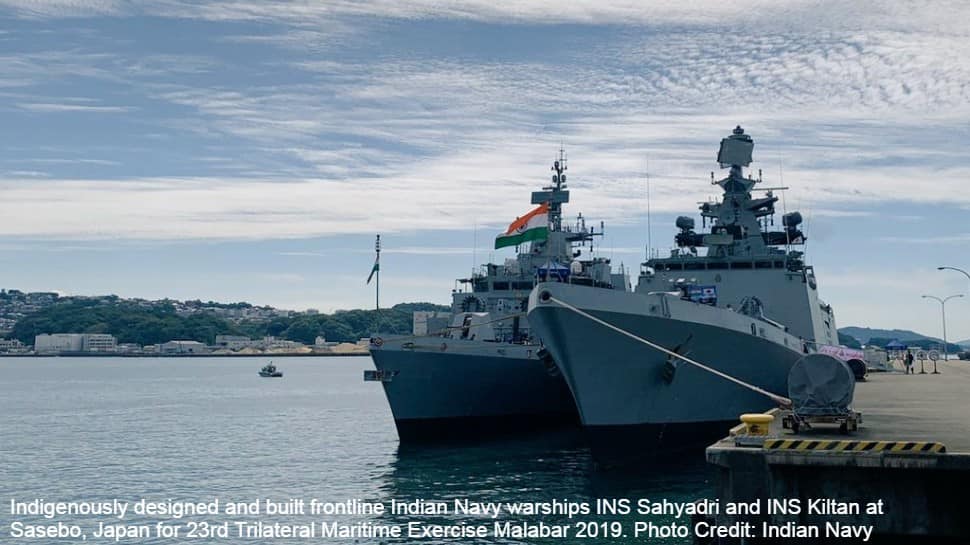 Indian Navy led by Rear Admiral Suraj Berry, Flag Officer Commanding Eastern Fleet, is participating in the 23rd edition of the Trilateral Maritime Exercise Malabar 2019 with the navies of Japan and USA from September 26 to October 4, 2019. The massive naval drill is taking place off the coast of Japan.

Two indigenously designed and built warships - INS Sahyadri, a multipurpose guided-missile frigate, and anti-submarine warfare corvette INS Kiltan - and one P8I long-range maritime patrol aircraft are taking part in the exercise. The warships and aircraft reached Sasebo in Japan on Wednesday to participate in Malabar 2019.

According to India, Malabar 2019 exercise will strengthen India-Japan-US naval cooperation as well as ensure enhanced interoperability between the three forces based on shared values and principles. "The Exercise would encompass conduct of complex maritime operations in the surface, sub-surface and air domains, and focus on Anti-Submarine Warfare, Anti-Air and Anti-Surface Firings, Maritime Interdiction Operations (MIO) including Visit Board Search and Seizure (VBSS) and tactical scenario-based Exercise at Sea. In addition, the partner navies would conduct official protocol visits, professional interactions including Subject Matter Expert Exchanges (SMEE), reciprocal ship visits, sports fixtures and social events during the harbour phase," said a press release by India's Defence Ministry.

"Participation of Indian Navy ships and aircraft in the Exercise would significantly bolster the strong maritime bonds of friendship between the three countries and contribute to security and stability in the region," added the ministry.

Defence Minister Rajnath Singh and his Japanese counterpart Takeshi Iwaya had on September 2, 2019, during the Annual Defence Ministerial Dialogue between the two countries in Tokyo announced that Malabar 2019 will take place in Japan from September 26 to October 4, 2019. The first Malabar Exercise had taken place between the navies of India and the US in 1992 with Japan joining the drills from 2015.