The protests across the US erupted after the death of a black man George Floyd in Minneapolis on May 25. 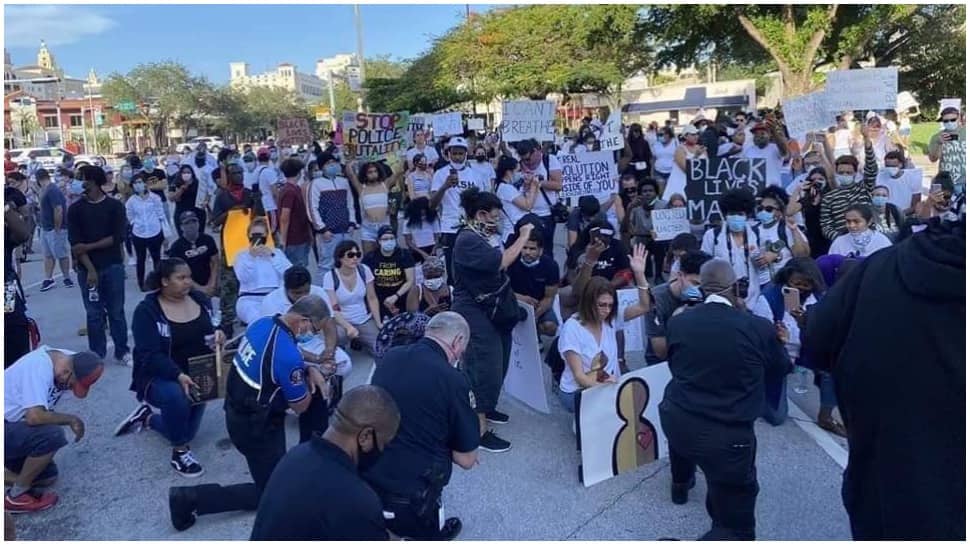 New Delhi: The countrywide on-going protests in the United States that has gone violent in the past few days witnessed a new turn on Monday (June 1, 2020) when the Miami Police and protesters in Coral Gables came together and took a knee to join in a moment of peace and prayer for George Floyd.

The pictures went viral on social media after cops from several departments came together and took part in the prayer with the protesters.

Miami Police just apologised in front of the Protestors for Police Brutality. All violence stopped and people hugged the cops. That’s how you win confidence and hearts pic.twitter.com/YulfYbGb4F

Police in Miami kneeled down and apologize. This is the first step for change.  #Black_Lives_Matter pic.twitter.com/znknarUkRp

The protests across the US erupted after the death of a black man George Floyd in Minneapolis on May 25. The Minneapolis Police officers responded to a call about an alleged forgery and found the suspect sitting inside a car. One of the police officers later pinned Floyd on the ground and put his knee on Floyd's neck despite him claiming that he is finding it difficult to breathe. The video had gone viral on social media.

Four police officers in Minneapolis have been sacked for their involvement in Floyd's death.

Earlier on Monday, Washington DC Mayor Muriel Bowser imposed a city-wide curfew as the protests intensified. Bowser announced that she is activating the DC National Guard to support the Metropolitan Police Department.

The Mayor made the announcement following the third day of protests demanding action be taken against the police officers responsible for the murder of Floyd.

Mayor Bowser is ordering a citywide curfew for the District of Columbia from 11:00 p.m. on Sunday, May 31, until 6:00 a.m. on Monday, June 1. She has also activated the DC National Guard to support the Metropolitan Police Department.

The US President Donald Trump was also rushed to the underground bunker for around an hour as violent clashes erupted between the protesters and security forces outside the White House on Friday night in Washington, DC, CNN quoted a White House official as saying.