The defence has the option of making a further appeal to the country`s supreme court, based in the capital Naypyitaw. 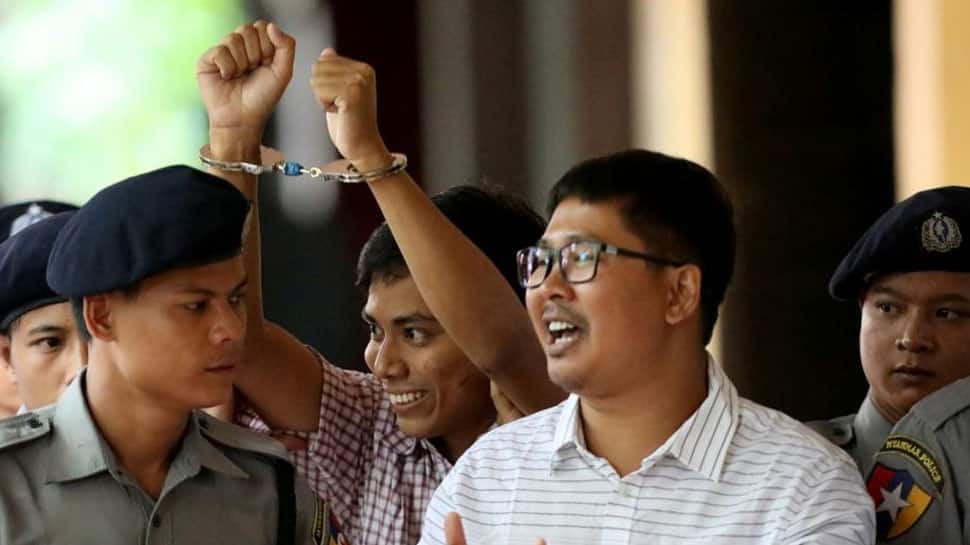 YANGON: A Myanmar court on Friday rejected the appeal of two Reuters reporters sentenced to seven years in jail on charges of breaking the Official Secrets Act, saying the defence had not provided sufficient evidence to show they were innocent. Wa Lone, 32, and Kyaw Soe Oo, 28, were convicted by a lower court in September in a landmark case that has raised questions about Myanmar`s progress towards democracy and sparked an outcry from diplomats and human rights advocates.

"It was a suitable punishment," said High Court Judge Aung Naing, referring to the seven-year prison term meted out by the lower court. The defence has the option of making a further appeal to the country`s supreme court, based in the capital Naypyitaw. "Today`s ruling is yet another injustice among many inflicted upon Wa Lone and Kyaw Soe Oo. They remain behind bars for one reason: those in power sought to silence the truth," said Reuters Editor-in-Chief Stephen J. Adler in a statement.

"Reporting is not a crime, and until Myanmar rights this terrible wrong, the press in Myanmar is not free, and Myanmar`s commitment to rule of law and democracy remains in doubt." In their appeal arguments made last month, defence lawyers had cited evidence of a police set-up and lack of proof of a crime.

They told the appeal court the lower court that tried the case had wrongly placed the burden of proof on the defendants. The defence also said prosecutors had failed to prove the reporters gathered and collected secret information, sent information to an enemy of Myanmar or that they had an intention to harm national security.

Khine Khine Soe, a legal officer representing the government, told the appeal hearing last month that the evidence showed the reporters had collected and kept confidential documents. She said they intended to harm national security and the national interest. The judge said on Friday "it was not acceptable" to say that the defendants had acted according to journalistic ethics. "It cannot be said that it was a set up," he said.

Standing outside the court building in Yangon where the judgment was pronounced, Kristian Schmidt, the EU ambassador to Myanmar, said the ruling was a "miscarriage of justice and it gives us great concern for the independence of the justice system of Myanmar".

Defence lawyer Than Zaw Aung, speaking after the ruling, said his team would discuss the option of a supreme court appeal with the two reporters. "We are very disappointed with the judgment," he said.
Before their arrest, the reporters had been working on a Reuters investigation into the killing of 10 Rohingya Muslim men and boys by security forces and Buddhist civilians in western Myanmar`s Rakhine State during an army crackdown that began in August 2017.

The operation sent more than 730,000 Rohingya fleeing to Bangladesh, according to United Nations` estimates.