Formalising its role in the Azerbaijan-Armenia war, the Government of Turkey is now working to expedite establishing a military base in Azerbaijan. 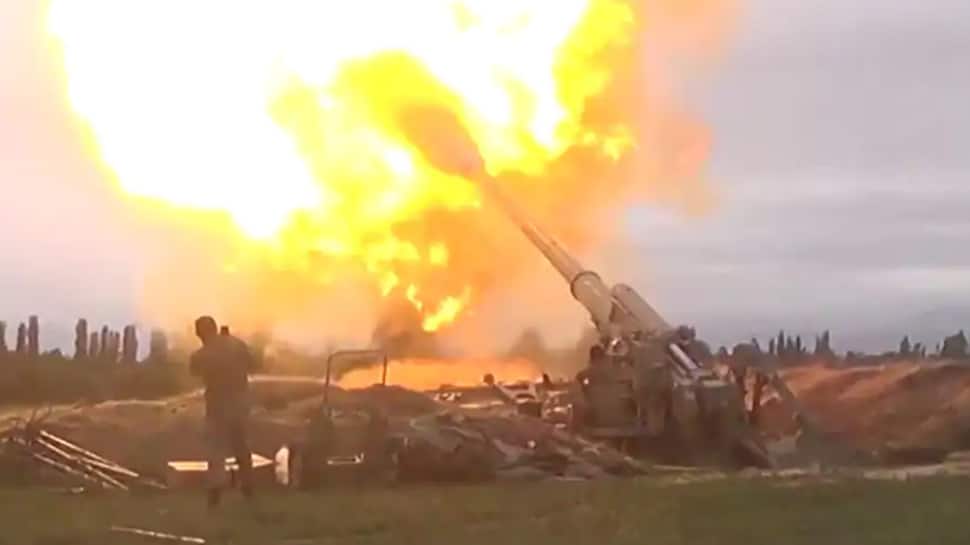 Formalising its role in the Azerbaijan-Armenia war, the Government of Turkey is now working to expedite establishing a military base in Azerbaijan. Analysts believe that the Azeri government has even begun to work towards this. The defense agreement between both the countries provides basis for this, which includes provisions on establishing military bases in each other's countries.

Strategists fear that with the establishment of the military base in Azerbaijan,Turkish President Erdogan might begin compromising the security of the countries in the region. They also see it as an attempt to further his Caliphate desire through military channels  .

The military cooperation between both the countries has already been concerning the regional players. During last year, both the countries organised  10 joint military exercises. The Turkish government has also been working on the capacity building of the Azeri Army, besides supplying it ammunition and drones. All these developments are leading to instability in the region.

Most recently, both the countries organised a joint military exercise during the escalated tensions between Azerbaijan and Armenia in July-August. Reports suggest that the Turkish Air Force even left its six F-16 jets in Azerbaijan's Nakshivan after the exercise. The leaving behind of F-16 fighter jets in Azerbaijan highlights that Turkey might have been planning to attack Armenia very soon after the Joint exercise. Though the Azeri authorities are denying the logic of deployment of jets as early preparation of war with Armenia, Strategists see the deployment exclusively for the purpose of a pre-planned offensive.

Besides supporting it militarily, Turkey  has also deployed more than ten thousand terrorists in Azerbaijan to take on Armenia in the ongoing war. These fighters are fighting besides the Azeri, Pakistani and Turkish armed forces in Nagorno-Karabakh. It is also believed that Erdogan’s army has trained the terrorists before deploying them to Azerbaijan.

The terrorists represent different terror groups fighting in Syria, especially in Idlib. These terror groups have been supported by President Erdogan and are waging a war in Syria. Now, Erdogan has begun using them to his advantage by deploying in Azerbaijan and Libya. However, he is also luring the terrorists by paying them a decent monthly salary, as high as 1,000 to 2,000 Dollars. Since Syrian economy is crippling and its currency devaluating , Erdogan’s offer seemed to be a good deal for the terrorists fighting Syrian government.

When the war between Azerbaijan and Armenia broke out in late September, several media reports flared up, reflecting that terrorists from Turkey sponsored Hamza Division — a part of the Syrian National Army, were being rapidly deployed in Azerbaijan. These terrorists are known for their brutality committed in Syria and have been even criticised by the United Nations for looting and destroying cultural property in Syria.

These facts reflect that Erdogan is using Nagorno-Karabakh as a lab to experiment on the fusion of state and non-state actors in foreign countries to attain his geopolitical objectives. Erdogan has also been providing Azeri army with emerging military technology equipment, including its high tech drones.

Erdogan’s pro-active participation in the Azerbaijan-Armenia war highlights an interesting fact that along with Political Islamist method and radicalising covert operations in foreign countries, Erdogan has now begun to use the Turkish military and terrorists for realisation of his Caliphate dream.

Another set of scholars believe that occupying Nagorno-Karabakh and Armenia is the long-term dream of Erdogan, which could lead to a large scale genocide of the Armenian community —given Erdogan’s deep hatred for the community. They also see the occupation of Nagorno-Karabakh as an important step towards the  establishment of ‘The Great Toran’ — a utopian dream of Erdogan.