House of Representatives Speaker Nancy Pelosi said on Thursday President Donald Trump already has admitted to bribery in the Ukraine scandal at the heart of a Democratic-led inquiry, accusing him of an impeachable offence under the U.S. Constitution. 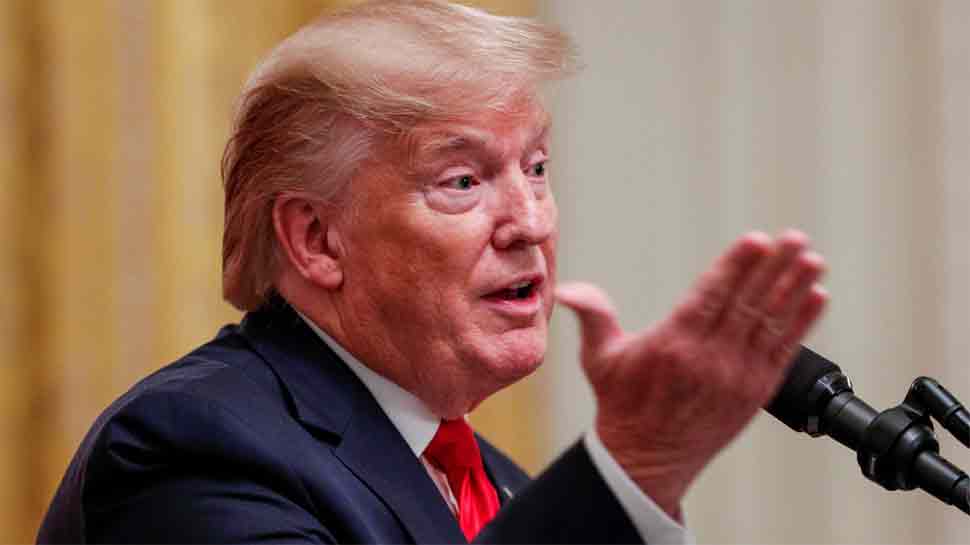 Washington: House of Representatives Speaker Nancy Pelosi said on Thursday President Donald Trump already has admitted to bribery in the Ukraine scandal at the heart of a Democratic-led inquiry, accusing him of an impeachable offence under the U.S. Constitution.

"The bribe is to grant or withhold military assistance in return for a public statement of a fake investigation into the elections. That`s bribery," Pelosi, the top Democrat in Congress, told a news conference the day after the first public hearing in the impeachment inquiry she announced in September.

"What the president has admitted to and says it`s `perfect,` I say it`s perfectly wrong. It`s bribery," Pelosi said.

Democrats are looking into whether Trump abused his power by withholding $391 million in U.S. security aid to Ukraine as leverage to pressure Kiev to conduct two investigations that would benefit him politically. The money, approved by the U.S. Congress to help a U.S. ally combat Russia-backed separatists in the eastern part of the country, was later provided to Ukraine.

Trump has denied any wrongdoing. Another central figure - former U.S. ambassador to Ukraine Marie Yovanovitch - is due to testify on Friday in the second public hearing in the inquiry.

If the House approves articles of impeachment - formal charges - against Trump, the Senate would then hold a trial on whether to convict him of the charges and remove him from office. Republicans control the Senate and have shown little support for Trump`s removal.

Pelosi`s comments could offer a preview of the articles of impeachment that Democrats might put forward. At her news conference, she also said Trump`s administration had committed "obstruction of Congress" by blocking testimony of officials summoned to testify in the inquiry.

The Constitution states that impeachable offences include "treason, bribery or other high crimes and misdemeanours." Democrats have begun to use the words bribery or attempted bribery in discussing Trump`s actions. According to precedent, obstruction could be another potential article of impeachment.

Republicans have said the House Democrats already have made up their mind to pass articles of impeachment, but Pelosi denied that was the case, saying the inquiry must play out before any decision can be made.

The focus of the impeachment inquiry is a July 25 phone call in which Trump asked Ukrainian President Volodymyr Zelenskiy to investigate Democratic rival Joe Biden and the former vice president`s son Hunter, who had served as a board member for a Ukrainian energy company called Burisma. Trump also asked Zelenskiy to investigate a debunked conspiracy theory embraced by some Trump allies that Ukraine, not Russia, interfered in the 2016 U.S. election.

Pelosi compared Trump`s actions to former President Richard Nixon`s actions in the Watergate corruption scandal that led him in 1974 to become the only U.S. president to resign.

She said that Trump`s actions to enlist a foreign power to help him in a U.S. election and the obstruction of information about that - she called it a cover-up - "makes what Nixon did look almost small."

`ALL ROADS LEAD TO PUTIN`
US intelligence agencies and former Special Counsel Robert Mueller concluded that Russia interfered in the 2016 election with a campaign of hacking and propaganda to boost Trump`s candidacy.

Pelosi said Russian President Vladimir Putin has benefited from numerous Trump actions, including the withholding of the security aid to Ukraine.

"All roads lead to Putin," Pelosi said, also mentioning the withdrawal of US troops in Syria and actions by Trump that have called into question US support for NATO.

Two career US diplomats, William Taylor and George Kent, testified on Wednesday in the first televised hearing of the inquiry that threatens Trump`s presidency as he seeks re-election in November 2020.

Taylor, the acting ambassador to Ukraine, offered an account that linked the Republican president more directly to the pressure campaign on Ukraine.

The public hearings follow weeks of closed-door interviews with current and former U.S. officials about Trump`s dealings with Ukraine.

`FALSE CLAIMS`
The House Intelligence Committee on Friday is due to hear in a public session from Yovanovitch, who Trump abruptly removed from her post as U.S. ambassador to Ukraine in May.

Trump`s personal lawyer Rudy Giuliani at the time was working to convince Ukraine to carry out the two investigations.

Yovanovitch, who has worked for both Republican and Democratic administrations, told lawmakers behind closed doors on Oct. 11 that Trump ousted her based on "unfounded and false claims by people with clearly questionable motives" after she came under attack by Giuliani.

On Wednesday, Taylor offered a new disclosure that indicated Trump`s keen interest in the investigations in Ukraine, saying a member of his staff overheard a July 26 phone call at a restaurant in which Trump asked about the probes he had asked Zelenskiy to conduct.

After the call between Trump and Gordon Sondland, a former political donor appointed as the U.S. envoy to the European Union, the staff member asked Sondland what Trump thought about Ukraine, Taylor said.

"Ambassador Sondland responded that President Trump cares more about the investigations of Biden, which Giuliani was pressing for," Taylor testified.

Republican lawmakers called Taylor`s account hearsay. A second staffer for the U.S. Embassy in Kiev overheard the phone call between Trump and Sondland, the Associated Press reported on Thursday, citing an unnamed source briefed on the situation.

Trump told reporters after the hearing that he knew "nothing" about the call with Sondland. "It`s the first time I heard it," he said.

The staffer cited by Taylor is David Holmes, a Taylor aide who has been subpoenaed to testify in the inquiry on Friday behind closed doors, said a person familiar with the issue.

Democrats are aiming to settle the question of Trump`s impeachment before the end of the year.