It was the first time the rioting charge has been used during protests which erupted over an extradition bill that would have allowed people in Hong Kong to be sent to mainland China for trial. 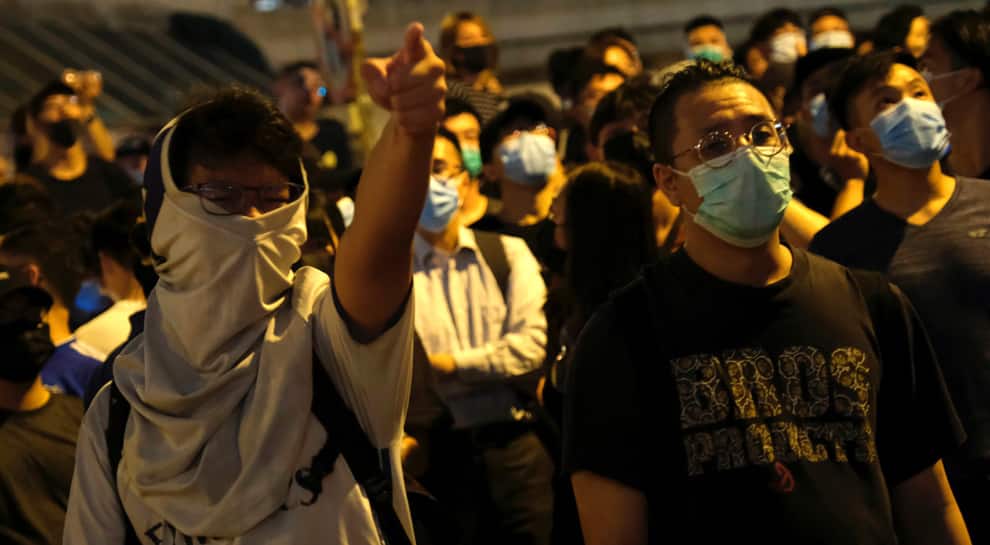 It was the first time the rioting charge has been used during protests which erupted over an extradition bill that would have allowed people in Hong Kong to be sent to mainland China for trial. Another man was charged with possession of an offensive weapon.

Police fired tear gas and rubber bullets on Sunday as they sought to defend China`s main representative office from protesters who set up road blocks and hurled bricks and sticks. What started three months ago as rallies against the extradition bill, has evolved into a wider backlash against the city`s government and its political masters in Beijing.

The near daily protests have disrupted business, piled pressure on the city`s government and stretched its police force, which some have accused of using excessive force. Hundreds of protesters gathered at the Kwai Chung police station where some of the activists were to be freed on bail. Clashes broke out between the protesters and police. One officer brandished a gun to ward off the crowd.

Rioting carries a maximum ten year jail term in Hong Kong. Activists say they have done nothing wrong and are only seeking justice. In the driving rain, many chanted "Liberate Hong Kong," and "Revolution of our time". Besides calling for the extradition bill to be scrapped, rather than its suspension so far, protesters have also demanded the resignation of city leader Carrie Lam, an independent inquiry into the police`s handling of the crisis and the unconditional release of all those arrested. Some of the activists are due to appear in court on Wednesday.

Earlier in the day, protesters blocked train services during the morning rush hour. "We don`t know how long we are going to stay here, we don`t have a leader, as you can see this is a mass movement now," said Sharon, a 21-year-old masked protester who declined to give her full name.

"It`s not our intention to inconvenience people, but we have to make the authorities understand why we protest. We will continue with this as long as needed." By mid-morning, commuters were crammed into stations across the city, waiting to board trains that were delayed, with no service on some lines.

Hong Kong, which returned from British to Chinese rule in 1997, is embroiled in its worst political crisis for decades as the increasingly violent protests pose one of the gravest populist challenges to Communist Party rulers in Beijing. China on Monday reiterated its support for Hong Kong`s embattled leader Carrie Lam and its police and urged Hong Kong`s people to oppose violence.

Lam`s popularity has dropped to a record low, according to a survey by the independent Public Opinion Research Institute released on Tuesday. The survey, conducted between July 17 and July 19, showed Lam scored a rating of 30.1, down from 33.4 at the beginning of the month. Her approval rate stands at 21%, while her disapproval rate is 70%.

Over the last few years, many people in Hong Kong have become concerned about the whittling away of the city`s freedoms, guaranteed under a "one country, two systems" formula established when it returned to China in 1997. China denies interfering and has said the protests are an "undisguised challenge" to the formula under which the city is ruled, and risked damaging its economy.