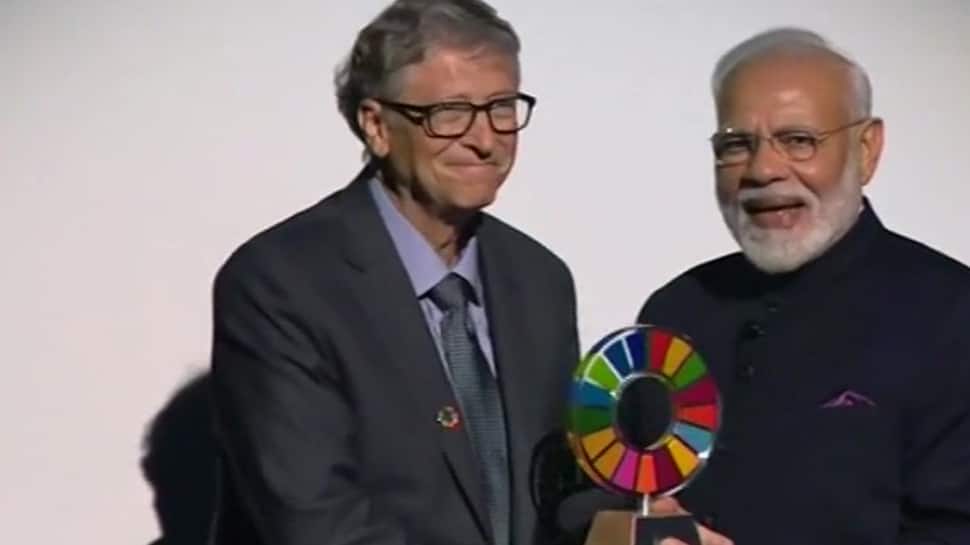 New York: Prime Minister Narendra Modi on Wednesday was conferred with the 'Global Goalkeeper Award' for the 'Swachh Bharat' campaign, from the Bill and Melinda Gates Foundation. The award was presented by Bill Gates on the margins of the United Nations General Assembly (UNGA).

The PM also said that conferring the honour on him on the 150 birth anniversary of Mahatma Gandhi is personally very significant for him. He said that this is proof that if the manpower of 130 crore people gets involved in fulfilling any resolution, then that challenge can be won.

"I dedicate this honour to the Indians who transformed the Swachh Bharat Mission into a mass movement and started making cleanliness a top priority in their daily lives," further said the PM.

PM Modi said that such a campaign was not heard or seen in any country in recent times. "This campaign was started by our government, but the command was taken by the people themselves. As a result, a record 11 million toilets could be constructed in the country in the last five years. As a result, before 2014, where rural sanitation coverage was less than 40 per cent, today it has increased to almost 100. I believe that the success of the Swachh Bharat Mission is above any figure."

Speaking on the benefit of the campaign, PM Modi said that this mission has benefitted the rural people of the country, especially the women. "Due to the lack of toilets, many girls had to leave their schools in between. Our daughters want to study, but the lack of toilets forced them to leave school and sit at home. It was the responsibility of my government to take out the poor women and daughters of the country from this situation and we performed it with full power, fulfilled it honestly," added PM Modi.

PM Modi said, "Today, it is a matter of great satisfaction to me that the Swachh Bharat Mission has become a medium for the survival of millions of lives. The report of the World Health Organization suggests that there is a possibility of saving 3 lakh lives due to Swachh Bharat."

"I have been told that a report by Bill and Milinda Gates Foundation has also come out that the increase in Rural Sanitation in India has reduced the Heart Problem in children and also improved the Body Mass Index of women. Today I am also happy that the dream of cleanliness that Mahatma Gandhi had dreamed of is now going to come true. Gandhi used to say that an ideal village can be built only when it is completely clean. Today we are moving towards making the whole country an ideal in terms of cleanliness, not just the village. The Swachh Bharat Mission has not only made the lives of crores of people better, has protected their dignity but has also played an important role in achieving the goals of the United Nations. The Swachh Bharat Mission has another impact that has been discussed very little. More than 11 crore toilets built during this campaign also opened a new door for economic activity at the village level. Democracy simply means that people should be at the centre of the systems and schemes. A strong democracy is the one that makes policies keeping the needs of the people at the centre," added PM Modi.

PM Modi asserted that India is ready to share its experience and expertise with other countries of the world.

"India is close to achieving its goal of cleanliness, but India is also working fast on other big missions. A campaign to promote Fitness and Preventive Healthcare is underway through Fit India Movement. Our focus under the Water Life Mission is on water conservation and recycling so that every Indian gets adequate and clean water. India has also launched a campaign to single-use plastic by 2022. Today, while I am talking to you, the work of collecting plastic waste is going on in many parts of India. Many such mass movements are going on in India today."

He reiterated his belief in the Indians. "I have full faith in the strength of 1.3 billion Indians. I am confident that like the Swachh Bharat Abhiyan, other missions will also be successful. With this hope, I conclude my thanks again to all the colleagues of the Bill & Milinda Gates Foundation, for this award and to the rest of the colleagues here."