PM Modi received a guard of honour at the Vladivostok International Airport in the presence of Russia`s Deputy Foreign Minister Igor Morgulov. PM Modi was welcomed by the Indian diaspora in Russia, at the Far Eastern Federal University (FEFU) in Vladivostok. 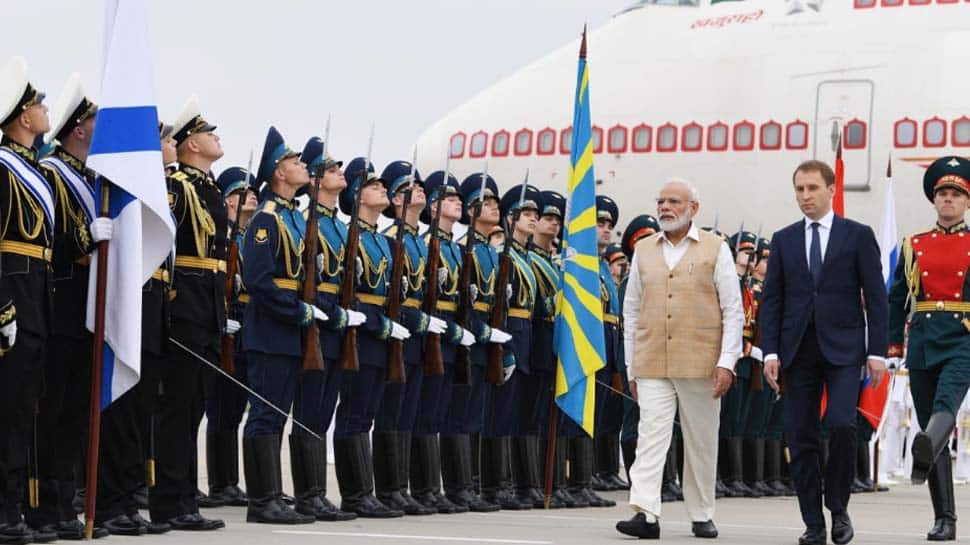 Prime Minister Narendra Modi arrived in Vladivostok city of Russia on Wednesday to participate in the 20th India-Russia annual summit and the fifth meeting of the Eastern Economic Forum (EEF). PM Modi received a guard of honour at the Vladivostok International Airport in the presence of Russia`s Deputy Foreign Minister Igor Morgulov.

Landed in Vladivostok, capital of the Russian Far East and the crossroads of a dynamic region. Looking forward to joining various programmes in this short but important visit. pic.twitter.com/cLa0hh5iby

PM Modi was welcomed by the Indian diaspora in Russia, at the Far Eastern Federal University (FEFU) in Vladivostok. After landing in the far eastern Russian city, PM Modi tweeted, "Landed in Vladivostok, capital of the Russian Far East and the crossroads of a dynamic region. Looking forward to joining various programmes in this short but important visit."

Foreign Secretary Vijay Gokhale had said that PM Modi is on a short visit to Russia only for just 36 hours. The PM will depart from Vladivostok on Thursday evening.

During the visit, the Prime Minister is scheduled to hold talks with Russian President Vladimir Putin in which the two leaders will discuss bilateral, regional, and international issues of mutual interest. Following this, the two sides will sign agreements in the fields of defence, trade, investments, industrial cooperation, energy and connectivity corridors.

PM @narendramodi was warmly welcomed at Vladivostok airport on his 3rd bilateral visit to Russia. Over the next 2 days, bilateral meeting with President Putin, participation at Eastern Economic Forum & meetings with other world leaders on the agenda. pic.twitter.com/x8NnoUjdUI

The issue of tension between India and Pakistan over Jammu and Kashmir may also figure in the talks. Russia was the first of the five permanent United Nations Security Council members to back New Delhi on the removal of special status for the erstwhile state of Jammu and Kashmir. Russia has rebuffed Pakistan`s attempts to seek mediation, saying that it is a bilateral matter between India and Pakistan.

An important visit to further cement cooperation with a valued friend.

PM @narendramodi landed in Vladivostok a short while ago. A series of programmes await today as well as tomorrow. pic.twitter.com/za4HdIWreG

On the first day, PM Modi along with Putin will visit 'Zvezda' Shipbuilding Plant which makes vessels including icebreakers and oil tankers and 'Street of the Far East' exhibition. The first day will also see the annual India-Russia summit with both leaders holding bilateral talks. On the second day, PM Modi will speak at the plenary of the Eastern Economic Forum and also, along with Putin, go to judo championship. A six-member Indian team is in Vladivostok to take part in the championship.

India believes its engagement with Russia in the far east will help its Indo-Pacific engagement and can help with the shortage of manpower in that part of Russia. With the opening of the northern sea route and arctic becoming the focus, New Delhi's presence in the region will meet its energy need.

A five-year road map (2019-2024) will be announced on hydrocarbon cooperation, both in term of purchase and exploration. COAL India and Steel Authority of India are will sign MoUs with there Russian counterparts for export of coking coal and cooperation in the mining sector.

When asked if Kamov Ka-226 or Ka 226 T - Russian utility helicopter - the contract will be signed, Foreign Secretary Vijay Gokhale had said in a briefing, "As far as I am aware, there will be no announcement regarding any specific agreements that have been reached."

An India Russia business dialogue will take place and for this, a 50 member delegation from FICCI is in the Russian city. 8 to 10 business MoUs will be signed during PM's visit. The previous editions of Eastern Economic Forum, which was started in 2015, saw high-level political representations by India.

Hiked power tariff in UP triggers BSP vs BJP tussle