PM Narendra Modi tells US President Donald Trump Kashmir a bilateral issue between India and Pakistan, no place for mediation

Prime Minister Narendra Modi on Monday stated that India and Pakistan had too many bilateral issues, and the two countries should sit down and work towards finding a solution for them. 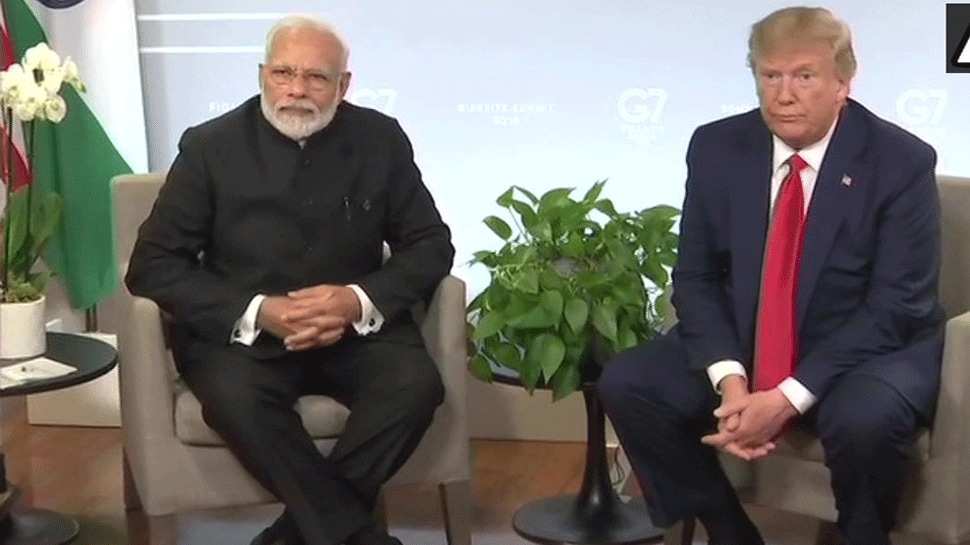 Biarritz (France): Prime Minister Narendra Modi on Monday in the presence of United States of America President Donald Trump categorically stated that there was no space for any country to mediate between the bilateral issues facing India and Pakistan. The statement from PM Modi came as he met President Trump on the sidelines of the G7 summit in Biarritz, France and made it clear that the Kashmir issue will not see the intervention by any third power.

"India and Pakistan have too many bilateral issues, and we should sit down and work towards finding a solution for them. India and Pakistan need to fight against poverty and lack of education, need to work towards the upliftment of people in both nations. I have communicated this to Pakistani Prime Minister. After Imran Khan was elected as the prime minister, I called him and told that Pakistan and India have to fight against poverty, against diseases and let us work together for the development of both countries. I always keep in touch with President Trump as well. India and Pakistan have many bilateral issues to resolve and we do not bother any other country with mediation. We can jointly deal with our issues," said PM Modi as Trump looked on.

"This is an important meeting with my friend and the world's oldest democracy. India is the biggest democracy in the world. He (Trump) congratulated me on the election victory. We can both work together, we have common values which can be of use to the world. In the field of economy, we are in constant talks and place due consideration of their (US) suggestions. Indian diaspora in the US, the way they have been a party to the US progress, I thank the people and administration of the US for that," added PM Modi.

President Trump shook PM Modi hand, too, while the two were facing questions from media and the two leaders laughed, signalling that they understood each other well. "I am here and have good relationship with great leaders, and I believe they can resolve the issues," said President Trump.

It is great to be with PM Modi, (India is an) incredible country and he is an incredible man and has had a tremendous election victory. He is a man who has love and respect in his country. We are talking about trade, military, and many different things. We had dinner together last night  (Sunday). I learnt a lot a lot aboput India, its a fascinating country and place," he added.

PM Modi's statement comes just days after President Trump claimed that the former had asked him to mediate with Pakistan to find a solution to the Kashmir when the two had met on the sidelines of G20 summit in Japan's Osaka.