Protests over the past two months spearheaded by pro-democracy activists against a proposed bill that would allow people to be extradited from the city to stand trial in courts in mainland China have grown increasingly violent. 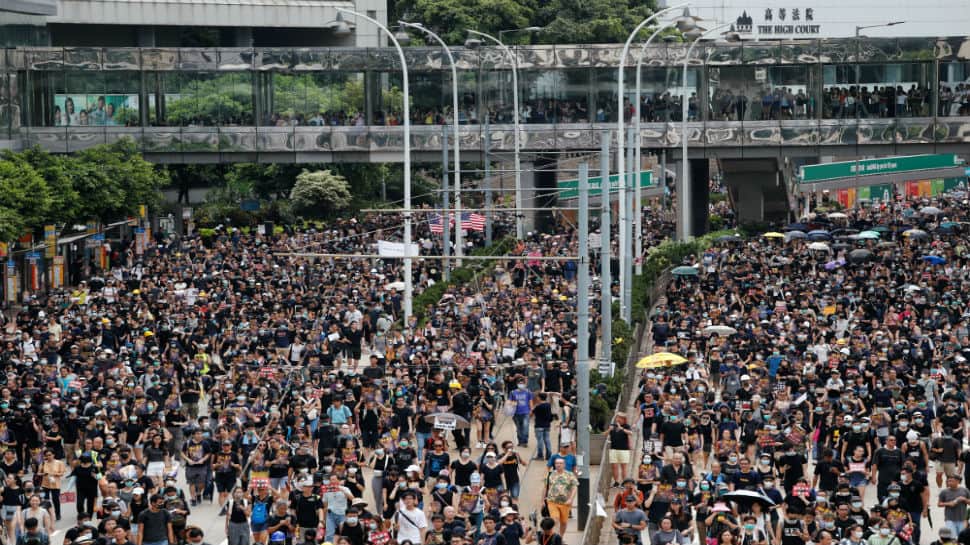 Hong Kong authorities stepped up security around China`s main representative office on Sunday as several protests broke out, with anger among the crowds simmering over what many see as an increasing cycle of violence against them.

Protests over the past two months spearheaded by pro-democracy activists against a proposed bill that would allow people to be extradited from the city to stand trial in courts in mainland China have grown increasingly violent.

A march on Saturday against a violent assault the previous weekend, by suspected triad gang members, ended in violent turmoil as riot police waded in to disperse crowds.

On Sunday, a gathering in a park in the city`s central business district began spilling onto into surrounding roads and black-clad protesters set off in several directions, clogging up major thoroughfares.

Thousands of people headed east, towards the shopping district of Causeway Bay, while another large contingent headed west, towards the Chinese government`s representative office, known as the Central Government Liaison Office.

There, hundreds of riot police blocked activists from advancing towards the building, which had been heavily fortified with water-filled plastic barricades. A clear plastic shield had been erected around a national emblem above its front doors.

The office has become a focus for the anger of protesters alarmed by what many see as Beijing`s increasing control despite guarantees of autonomy under a "one country, two systems" formula, struck when the former British colony returned to Chinese rule in 1997.

Last Sunday, protesters took police by surprise with a swoop on the Liaison Office, scrawling graffiti and throwing paint bombs at walls, the national emblem and a plaque.

Chinese officials described the vandalism as a "challenge" to the central government`s sovereignty which would not be tolerated.
"Everyone knows very well that the current Hong Kong government has been controlled by some outside forces, like those in the Liaison Office," said an activist surnamed Chan.

"Now Hong Kong doesn`t even have basic freedom of assembly. We have come here to make a symbolic expression."

China denies interfering in Hong Kong and has warned that the violent protests over the proposed legislation allowing extraditions to mainland China were an “undisguised challenge” to the formula under which it is ruled.

Many of the marchers on Sunday`s chanted slogans against the police such as "Black police. Shameful". Some held up banners saying: "We rise as one, we fight as one", and "Stop violence".

"I have been to every protest and I never wear a mask," said Phong Luk, who came to the protest wearing a Spider-Man suit to match one that his 6-year son wore.

"I`m doing nothing wrong. It is those in power that are wrong ... At this point, there is nothing to be done except for Carrie Lam to step down, because she obviously cannot rule."

The protests have brought the most serious political crisis to Hong Kong since it returned to China.

What began as a movement to oppose the extradition law that would have allowed people to be sent to China for trial, has taken on broader demands including the resignation of Hong Kong`s Beijing-backed leader Carrie Lam, calls for full democracy and an independent inquiry into what some say has been excessive police force against protesters.

The protests are also one of the most direct challenges to the authority of China`s President Xi Jinping.

The protests appeared to be getting more organised, as well as more violent. On Sunday, activists said they hoped to stretch the police by splitting up their marches.

"The police usually surround us and we have nowhere to go. So we adjust our strategy this time. This is much more fluid and flexible," said protester Edward Ng.