The Quad leaders committed to delivering up to one billion doses of COVID-19 vaccines to Southeast Asia by the end of 2022. 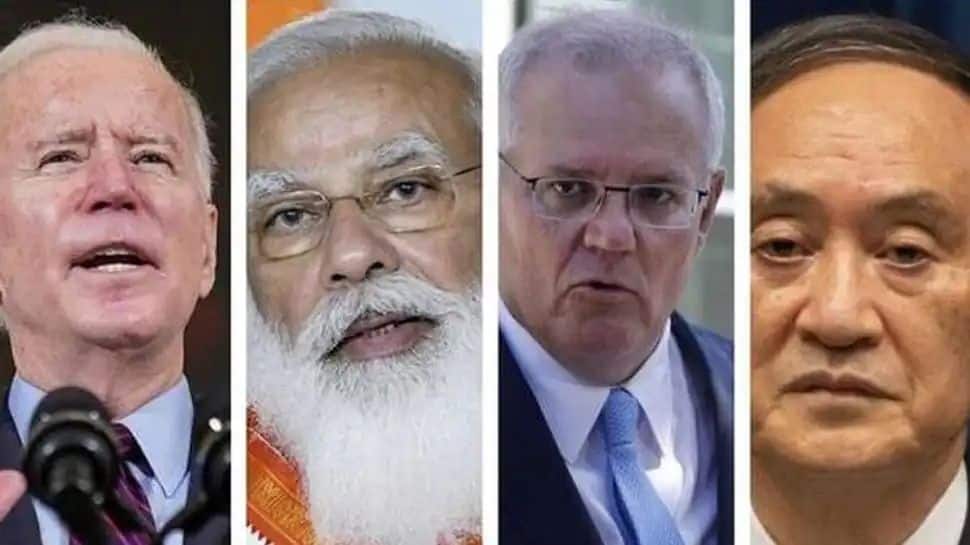 WASHINGTON: US President Joe Biden and the leaders of Australia, India and Japan agreed in a summit on Friday (March 12) to cooperate in providing up to a billion coronavirus vaccine doses to developing countries in the Indo-Pacific by the end of 2022, a move to counter China's widening vaccine diplomacy.

Joe Biden, hosting the first leader-level meeting of a group central to his efforts to counter China's growing military and economic power, said a free and open Indo-Pacific region was "essential" to all four countries. "The United States is committed to working with you, our partners, and all our allies in the region, to achieve stability," he said.

Biden's national security adviser, Jake Sullivan, said the leaders addressed key regional issues at the virtual meeting, "including freedom of navigation and freedom from coercion" in the South and the East China Sea, the North Korean nuclear issue, and the coup and violent repression in Myanmar.

Sullivan told a news briefing the meeting discussed the challenges posed by China, although this was not the focus. He said that among the issues discussed were recent cyberattacks and semi-conductor supply-chain issues.

The Quad leaders committed to delivering up to one billion doses of COVID-19 vaccines to Southeast Asia by the end of 2022, Sullivan said.

Japanese Prime Minister Yoshihide Suga said he wanted the four "to forge strongly ahead toward the realization of a free and open Indo-Pacific" and that Japan had agreed to cooperate in providing vaccine-related support to developing countries.

He also told reporters he had expressed strong opposition to attempts by China to change the status quo in the region and that the four leaders had agreed to cooperate on the issue.

India and Australia also emphasized the importance of regional security cooperation, which has been enhanced by previous lower-level Quad meetings.

India Foreign Secretary Harsh Vardhan Shringla said the meeting had agreed US vaccines would be manufactured in India, something New Delhi has called for to counter Beijing`s widening vaccine diplomacy.

In a joint statement, the leaders pledged to work closely on COVID-19 vaccine distribution, climate issues and security.

"We strive for a region that is free, open, inclusive, healthy, anchored by democratic values, and unconstrained by coercion," they added, without mentioning China by name.

The meeting also agreed to set up a group of experts to help distribute vaccines, as well as working groups for cooperation on climate change, technology standards, and joint development of emerging technologies.

The leaders agreed to hold an in-person meeting later this year.

India, Australia and Japan have all faced security challenges from China, strengthening their interest in the Quad.

Quad cooperation dates back to their joint response to the Indian Ocean earthquake and tsunami in 2004.

The Quad was revived under the Trump administration, which saw it as a vehicle to push back against China. The United States hosted foreign ministers meeting in 2019, which was followed by another in Japan last year and a virtual session in February.

Friday's meeting coincided with a major US diplomatic drive to solidify alliances in Asia and Europe to counter China, including visits next week by Secretary of State Antony Blinken and Defense Secretary Lloyd Austin to Japan and South Korea.

Washington has said it will not hold back in its criticism of Beijing over issues ranging from Taiwan to Hong Kong and the genocide it says China is committing against minority Muslims.

Modi told the session the Quad had "come of age" and would "now remain an important pillar of stability in the region." Australian Prime Minister Scott Morrison called the meeting "a whole new level of cooperation to create a new anchor for peace and stability in the Indo-Pacific."

A fact sheet issued after the meeting said the United States, through its International Development Finance Corp, would work to finance Indian drugmaker Biological E Ltd to produce at least 1 billion COVID-19 vaccine doses by end of 2022.

It also said Japan was in discussions to provide concessional yen loans for India to expand manufacturing of COVID-19 vaccines for export.

However, Indian government sources say US curbs on exports of critical materials could hamper that effort and those to start large-scale distribution to Southeast Asia.