Russia and Japan have been in dispute for seven decades over the islands, known in Russia as the Southern Kuriles and in Japan as the Northern Territories. 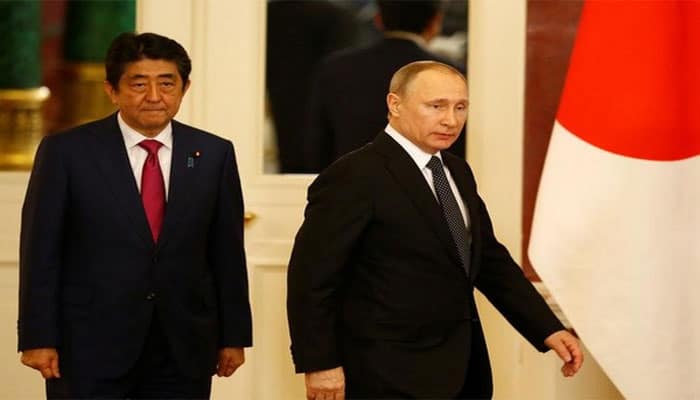 Moscow: Russia has slapped down Japanese assertions that a deal is in the offing to resolve a decades-old territorial dispute, accusing Tokyo of distorting agreements struck with Moscow to break the deadlock. Japanese Prime Minister Shinzo Abe is making a push for a treaty with Russia over islands captured by Soviet troops in the last days of World War Two. He is due to hold talks with Russian President Vladimir Putin this month, but Moscow has shown no willingness to cede control over the islands.

A Russian lawmaker on Thursday put forward a bill that would make it illegal for parliament to authorise any part of the territory being handed over by Russia. Russia and Japan have been in dispute for seven decades over the islands, known in Russia as the Southern Kuriles and in Japan as the Northern Territories. Russia`s Foreign Ministry said late on Wednesday it had summoned Japan`s ambassador to complain about comments from Tokyo that "crudely distort the essence of agreements between Russia and Japan`s leaders on accelerating the negotiation process..."

"Such statements cannot be regarded as anything other than an attempt to artificially aggravate the atmosphere around the problem of the peace treaty, to impose one`s own scenario for its resolution on the other side," it said. In particular, it said Japan had spoken about the need to reach an understanding with Russians living on the islands about their transfer to Japanese control, and about Moscow refusing to pay compensation for "occupying" the islands.

Japan`s Chief Cabinet Secretary Yoshihide Suga said on Thursday that Tokyo had already conveyed its stance to Moscow, but declined to comment on details. "We continue to work persistently based on our basic policy that we aim to resolve the issue of the islands and have a peace treaty," Suga said.

The idea of ceding any territory is likely to meet opposition from Russians who lauded the annexation of Crimea from Ukraine in 2014. A lawmaker from the pro-Kremlin Liberal Democratic Party put forward a bill on Thursday that would prevent parliament ratifying any deal giving Japan jurisdiction over the islands.