Kremlin spokesman Dmitry Peskov reportedly said the media report based on Solovei's assertions, which was picked up by other British newspapers, was false. 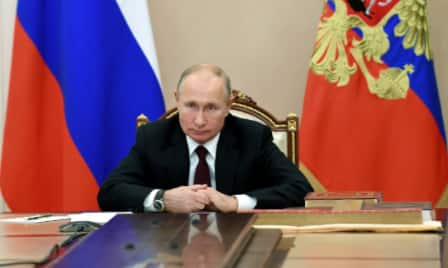 New Delhi: Russian President Vladimir Putin may step down next year amid fears of Parkinson's disease, according to a report. Moscow political scientist Valery Solovei has reportedly told The Sun that Putin's 37-year-old girlfriend, Alina Kabaeva, and his two daughters are pushing him to leave the office.

Solovei is quoted as saying, “There is a family, it has a great influence on him. He intends to make public his handover plans in January,” Solovei further suggested that the Russian President may be suffering from Parkinson’s as he has been seen recently exhibiting symptoms of the disease.

Recent footage of Putin's legs moving around as he gripped onto the armrest of a chair; a twitching pen in his fingers; and a cup filled with painkillers had been noticed.

On contrary to these speculations in media, the Kremlin rejected the report that Vladimir Putin may quit from his post. Kremlin spokesman Dmitry Peskov reportedly stated that the media report based on Solovei's assertions, which was picked up by other British newspapers, was false.

"It's absolute nonsense," said Peskov, adding "Everything is fine with the President." When asked if Putin would step down in the near future, Peskov firmly said, "No".

Earlier, British newspapers 'The Sun' and 'The Daily Mail' cited Professor Valery Solovei, who earlier this week on a Moscow radio station suggested that Putin was under pressure from his near and dear ones to step down due to fears for his health.

Notably, this is not the first time that people speculated that President Putin may be suffering from Parkinson's disease.

The speculation also came to the fore amid Russian lawmakers considering legislation proposed that would grant ex-presidents lifetime immunity from criminal prosecution.

A bill submitted to Parliament on Thursday mentioned granting immunity granted to Russian ex-presidents from criminal prosecution could be extended to any offences committed in their lifetimes, not merely while in office, according to a Reuters report.

The bill, published on a government website, is one of several being introduced following constitutional reforms that, among other things, allow President Vladimir Putin to run again when his term ends in 2024.

The draft legislation is being carefully parsed for clues as to what Putin, who has dominated Russian politics for more than two decades, plans to do in 2024.

Former presidents already enjoy lifetime immunity for crimes committed in office under legislation adopted after Russia`s first post-Soviet president, Boris Yeltsin, handed the reins of power to Putin at the turn of the century.