Southern Military District launched the Sukhoi Su-30 twin-engine, two-seat multirole fighter to intercept the US  P-8 Poseidon, RC-135 and KC-135 aircraft and ensure they do not breach the Russian airspace. 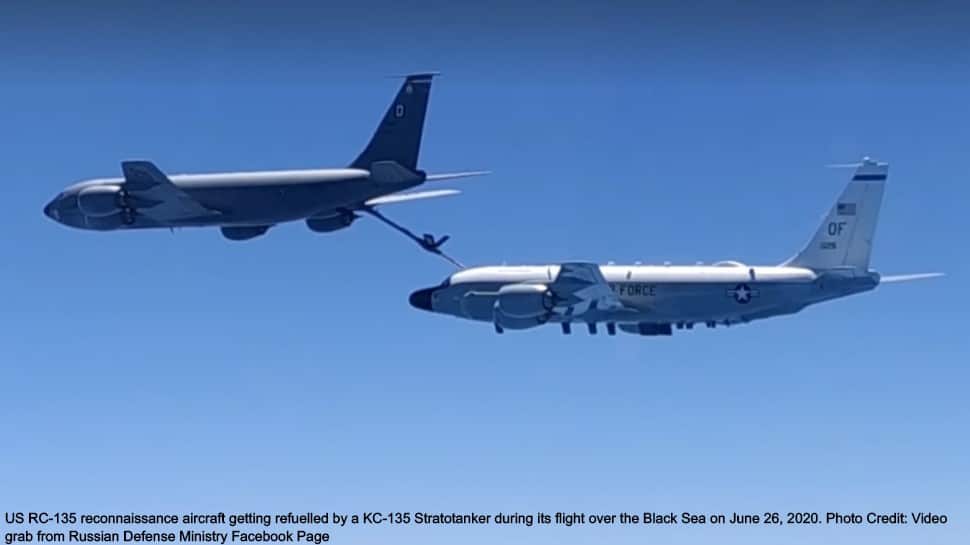 A Russian Sukhoi Su-30 was scrambled on June 26, 2020, to intercept American combat aircraft over the Black Sea. The United States of America P-8 Poseidon anti-submarine warfare (ASW), anti-surface warfare (ASUW) aircraft was flying over the neutral waters of the Black Sea when Russian Aerospace Forces radars tracked it along with an RC-135 reconnaissance plane and KC-135 Stratotanker aerial refuelling aircraft.

Southern Military District launched the Sukhoi Su-30 twin-engine, two-seat multirole fighter to intercept the US  P-8 Poseidon, RC-135 and KC-135 aircraft and ensure they do not breach the Russian airspace.

"On June 26, 2020, the duty air defense forces of the Southern Military District promptly revealed the actions of USAF reconnaissance aircraft over the neutral waters of the Black sea and escorted them by a Russian fighter. At a considerable distance from the state border of the Russian Federation, US air force aircraft were continuously accompanied by Russian radar controls," stated the Russian Defense Ministry.

Posting a 1.48-minute-long video of the intercept on its Facebook page, the Russian Defense Ministry added, "To intercept targets, the SMD duty air defence fighter Su-30 fighter of the Black Sea Fleet naval aviation was lifted into the air. The crew of a Russian fighter jet approached the air objects at a safe distance, identified them as a US Navy P-8A "Poseidon" patrol plane, an RC-135 strategic reconnaissance aircraft, and a US air force KC-135 tanker aircraft, which immediately changed the flight direction from the state border of the Russian Federation."

The Russian Defence Ministry published a video of its planes intercepting American aircraft over the neutral waters of the Black Sea. The footage shows a P-8 Poseidon, RC-135 reconnaissance plane, and KC-135 Stratotanker aerial refuelling aircraft, escorted by a Russian Su-30.

According to Russia, its Su-30 pilot carried out the intercept and escort in "strict accordance with international rules for the use of airspace" and returned to its base safely after conducting the operation.

Apart from the 35 manned aircraft, a total of six drones, too, flew close to Russia's borders. The Russian fighters had to be scrambled 19 times to intercept foreign aircraft.

However, none of the foreign aircraft violated Russia's airspace, added the Defense Ministry.

Nobody briefed me on Russian bounties against US troops: President Donald Trump