The crown prince said he agreed with Mike Pompeo that the September 14 attacks, which damaged the world's biggest petroleum-processing facility and knocked out more than 5% of global oil supply, were an act of war by Iran. 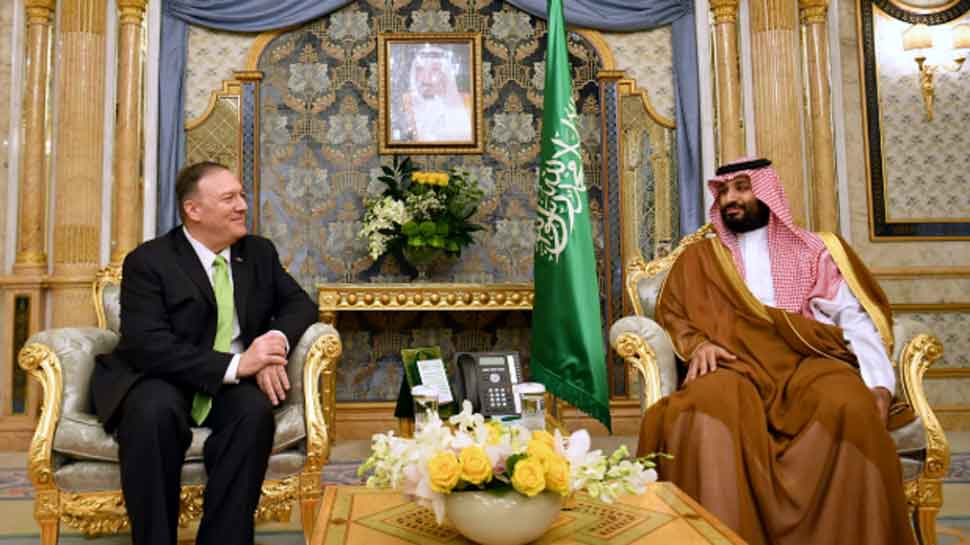 Washington: Saudi Arabia's crown prince warned in an interview broadcast on Sunday that oil prices could spike to "unimaginably high numbers" if the world does not come together to deter Iran, but said he would prefer a political solution to a military one.

Speaking to the CBS program "60 Minutes," Mohammed bin Salman, the kingdom`s de facto ruler, also denied that he ordered the killing of journalist Jamal Khashoggi by Saudi operatives nearly a year ago, but said he ultimately bears "full responsibility" as the leader of his country.

While Khashoggi's death sparked a global uproar and tarnished the crown prince`s reputation, the Trump administration`s tense standoff with Iran, Saudi Arabia`s arch-foe, has more recently dominated U.S. policy toward Riyadh, especially after the Sept. 14 attacks on the heartland of the Saudi oil industry.

"If the world does not take a strong and firm action to deter Iran, we will see further escalations that will threaten world interests," the crown prince said. "Oil supplies will be disrupted and oil prices will jump to unimaginably high numbers that we haven’t seen in our lifetimes."

The crown prince, in an interview conducted on Tuesday in Saudi Arabia, said he agreed with US Secretary of State Mike Pompeo that the September 14 attacks, which damaged the world's biggest petroleum-processing facility and knocked out more than 5% of global oil supply, were an act of war by Iran.

But he said he preferred a peaceful resolution because a war between Saudi Arabia and Iran would collapse the global economy.

The United States, European powers and Saudi Arabia have blamed the attacks on Iran. Tehran has denied any involvement. Instead, the Iran-aligned Yemeni Houthi rebel group claimed responsibility.

"The political and peaceful solution is much better than the military one," he said.

The crown prince also said US President Donald Trump should meet with Iranian President Hassan Rouhani to craft a new deal on Tehran`s nuclear program and influence across the Middle East.

Efforts to bring the two together last week at the United Nations General Assembly failed. Tensions between Washington and Tehran have escalated over the U.S. withdrawal from an Iranian nuclear deal and its reinstatement of sanctions against Tehran.

Days before the anniversary of the killing of Khashoggi in a Saudi consulate in Turkey, the crown prince said: "Absolutely not," when asked if he ordered the murder.

But he said he took full responsibility for the killing, "since it was committed by individuals working for the Saudi government."

"This was a mistake. And I must take all actions to avoid such a thing in the future," the crown prince said of the killing, which he called "heinous."

The CIA and some Western governments have said they believe he ordered it, but Saudi officials have repeatedly said he had no role.

After initial denials, the official Saudi narrative blamed the murder on rogue operatives. The public prosecutor said the then-deputy intelligence chief ordered the repatriation of Khashoggi, a royal insider who became an outspoken critic, but the lead negotiator ordered him killed after discussions for his return failed.

Asked how the killing could have happened without him knowing about it," the crown prince said: "Some think that I should know what 3 million people working for the Saudi government do daily? It`s impossible that the 3 million would send their daily reports to the leader or the second highest person in the Saudi government."

He insisted that "the investigations are being carried out, and once charges are proven against someone, regardless of their rank, it will be taken to court, no exception made."
Eleven Saudi suspects have been put on trial in secretive proceedings but only a few hearings have been held. A U.N. report has called for Prince Mohammed and other senior Saudi officials to be investigated.

Khashoggi, a Washington Post columnist, was last seen at the Saudi consulate in Istanbul on Oct. 2, where he was to receive papers ahead of his wedding. His body was dismembered and removed from the building, according to reports, and his remains have not been found.

Asked about criticism of the Saudis in the U.S. Congress over the Khashoggi killing and the Saudi-led military campaign in Yemen, which has taken a huge civilian toll, the crown prince said: "The (U.S.-Saudi) relationship is much larger than that."

The crown prince also repeated a Saudi call for Iran to halt its support for Houthi forces in Yemen and said he was open to "all initiatives for a political solution" to end the war there.