The bloody standoff between security forces and activists at Polytechnic University entered its second day after a night of mayhem in which a police van was set alight and a police officer was shot with an arrow. 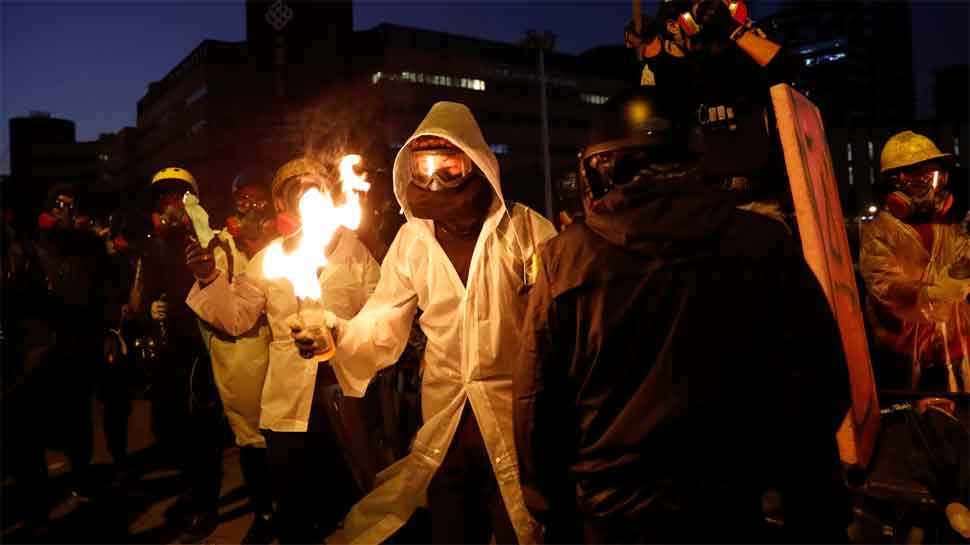 Hong Kong: Hong Kong police fired tear gas at protesters as they tried to escape a besieged university on Monday while hundreds more pro-democracy activists stayed inside armed with petrol bombs and other weapons awaiting an expected operation to oust them.

The bloody standoff between security forces and activists at Polytechnic University entered its second day after a night of mayhem in which a police van was set alight and a police officer was shot with an arrow.

"Remember you have life in your hands. Why do you need to push us to death?" one person shouted at police from a campus rooftop as protesters wearing gas masks and clutching umbrellas looked for ways to escape the university.

Police warned they were ready to use live bullets if "rioters" continued to used lethal weapons, amid a dramatic escalation of the unrest that has plunged the Asian financial hub into chaos for almost six months.

Demonstrators angry at what they see as Chinese meddling in the former British colony have said they are responding to excessive use of force by police.

"The protesters have been reacting to the police," said Joris, 23, a civil engineer who like others did not give his full name. "We haven`t fought back as much as we could. I would be prepared for jail. We are fighting for Hong Kong."

Elsewhere in the semi-autonomous territory on Monday riot police arrived in the commercial Nathan Road area where black-clad protesters had roamed the streets before dawn, many carrying petrol bombs.

Police started to clear away debris including umbrellas, bricks and furniture items down one of the city`s busiest tourist and commercial districts, to make way for traffic.

Just a few hours earlier three young women had pushed a trolley of petrol bombs down the road while others dug up paving slabs and used bricks to block roads, some chanting: "Liberate HK, revolution of our time."

The city`s Cross Harbour Tunnel linking Hong Kong island to the Kowloon peninsula remained shuttered and protesters torched a footbridge that crosses the highway to the tunnel, authorities said.

Some train services and many roads across the Kowloon peninsula remained closed. All schools were shut.

As police approached the barricaded front gate of the university in the predawn hours, protesters retreated into the campus and started fires at the gate and a footbridge.

Some protesters discussed trying to leave, while others reinforced barricades and carried boxes of petrol bombs to positions around the complex.

Thousands of residents and protesters flocked to districts around the university including Tsim Sha Tsui, Jordan and Yau Ma Tei, to try to penetrate the riot-police lines to rescue the trapped students.

"If we can only hold on till dawn, more might come," said one young activist in the university.

University President Teng Jin-Guang said in an online video on Monday that he had brokered a truce with police to allow protesters on campus to leave peacefully, however it was unclear whether a truce was taking effect.

Some of those trapped on the sprawling red-brick campus close to the city`s harbour said they would never surrender.

"We’ve been trapped here, that’s why we need to fight until the end. If we don’t fight, Hong Kong will be over," said Ah Lung, a 19-year-old protester.

Many protesters wore gas masks or tied handkerchiefs over their mouths and noses to protect themselves from clouds of tear gas. Some stripped down to their underwear, after earlier dousings from water cannon that witnesses said contained an irritant.

An armoured police vehicle that was set ablaze by petrol bombs in Sunday`s violence was towed away early on Monday.

Chinese soldiers in a base close to the university were seen on Sunday monitoring developments with binoculars, some dressed in riot gear.

Chinese troops in shorts and T-shirts, some carrying red plastic buckets or brooms, emerged from their barracks on Saturday in a rare public appearance to help clean up debris.

Chinese troops have appeared on Hong Kong`s streets only once since 1997, to help clear up after a typhoon last year.

The unrest in Hong Kong poses the gravest popular challenge to Chinese President Xi Jinping since he came to power in 2012. Xi has said he is confident Hong Kong`s government can resolve the crisis.

Beijing denies interfering in Hong Kong`s affairs and has blamed foreign influences for the unrest.