Queues built up at polling stations through the morning as South Africans started voting in parliamentary and provincial elections. 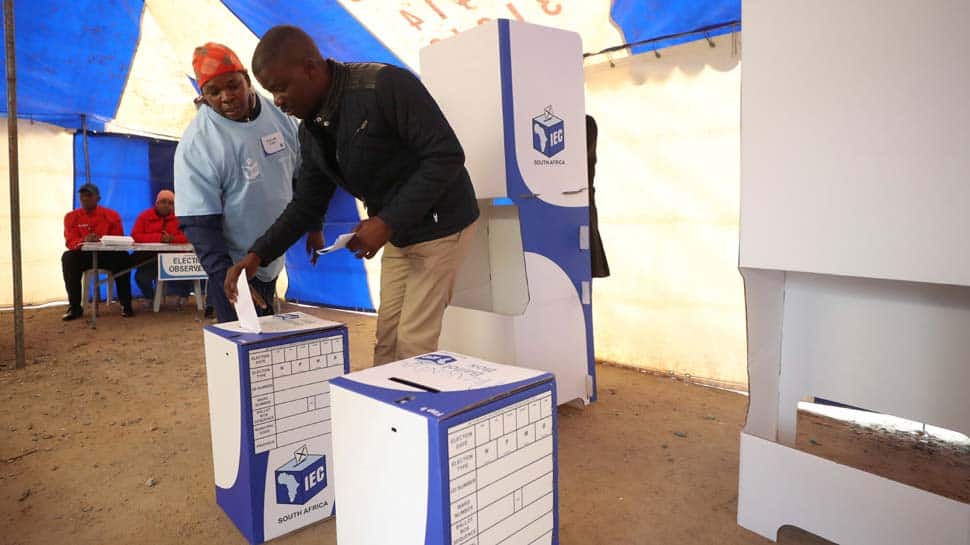 JOHANNESBURG: The African National Congress faced its toughest electoral test on Wednesday as it sought to reverse a slide in support from voters frustrated by graft and racial inequalities a generation after it won power in South Africa`s first all-race poll.

Queues built up at polling stations through the morning as South Africans started voting in parliamentary and provincial elections. Officials have not said when the final results will be announced.

The national election is the first under President Cyril Ramaphosa, who replaced scandal-plagued Jacob Zuma as head of state in February 2018 after four years as Zuma`s deputy.

Opinion polls suggest the ANC will again win a majority of the 400 seats in the National Assembly, but analysts have predicted its margin of victory will fall, particularly in major cities.

"I`m a member of the ANC but I didn`t vote for them this time," said construction worker Thabo Makhene, 32, in the commercial hub of Johannesburg.
"They need to catch a wake-up. The way they run the state, mishandling state funds, they’ve lost their morals."

"The weather changes everyday, why can’t we," he said as he waited to vote in Soweto.

The ANC, which has governed South Africa since the end of white minority rule in 1994, won 62 percent of the vote in 2014`s parliamentary election, down from 2009 and far short of its best result, 69 percent in 2004 under President Thabo Mbeki.

Analysts have put that falling support down to corruption allegations against government officials, a slowing economy with one of the highest unemployment rates in the world, and demands from black citizens for more equitable distribution of land.

"The belief is that a poor showing for the ANC would embolden Ramaphosa`s opponents and risk a potential leadership challenge," Razia Khan, chief Africa economist at Standard Chartered, said in a research report.

Ramaphosa - who became ANC leader after narrowly defeating a faction allied with Zuma - has promised to improve service delivery, create jobs and fight corruption. But his reforms have been held up by divisions and opposition within his own party.

"Reforms will remain at best one-step-forward-one-step-back and so potential growth will not rise," Peter Attard Montalto, head of capital markets research at Intellidex, said in a note.

Africa`s most industrialised economy grew an estimated 0.8 percent in 2018 after recovering from a recession in the first half of the year when a drought hit farming, although blackouts at power utility Eskom continue to drag on activity. Growth is forecast at 1.5 percent this year.

The centre-right DA won 22 percent of the parliamentary vote in 2014. It appointed its first black leader Mmusi Maimane in 2015 and made headlines by leading coalition victories in local government elections in Pretoria and Johannesburg a year later.

But splits within the party and with allies could see support for the DA wane.

"Fear says to us let`s stick with what we know, hope says lets bring change," Maimane said after casting his ballot in the South African township of Soweto in Johannesburg.

Ramaphosa and Julius Malema, leader of the EFF, were due to vote later.