A 41-second-long video shot from inside Shoigu's aircraft shows the F/A-18 flying alongside the plane. Soon a Su-27 escorting the Russian Defense Minister's plane is seen moving in between the two aircraft following which the F/A-18 banks towards the left, ascends and then flies away from the Russian jets. 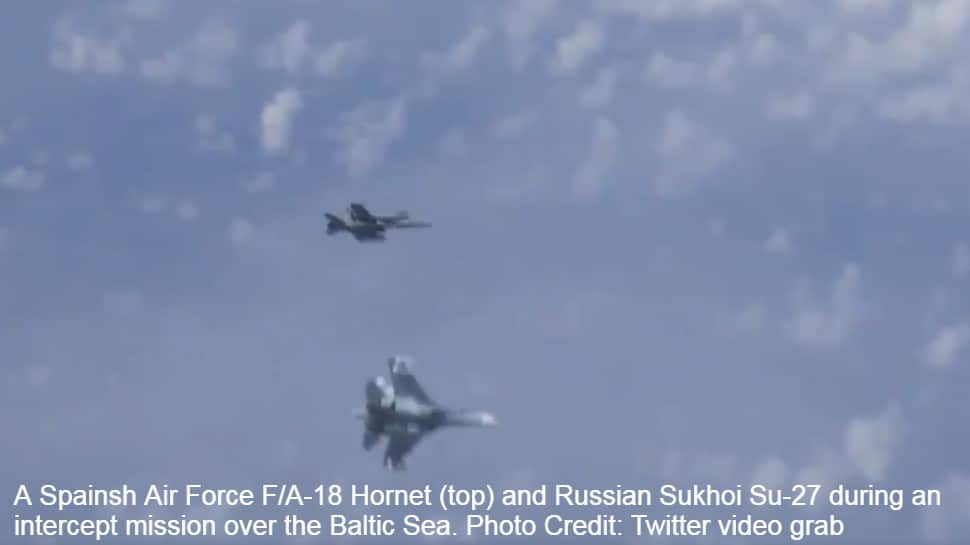 A Spanish Air Force F/A-18 (EF-18A) Hornet fighter, part of the NATO fleet, was forced to beat a hasty retreat while it was trying to track and intercept an aircraft carrying Russian Defense Minister Sergei Shoigu over the Baltic Sea on Tuesday after two Sukhoi Su-27 jets came into the picture. The Sukhoi Su-27s were escorting Shoigu's aircraft over the international waters of Baltic Sea when the Spanish Air Force EF-18A came too close to the Defense Minister's plane.

A NATO official claimed that the F/A-18 was part of Baltic Air Policing and had been scrambled to only identify the Russian aircraft without any information of the people on board. "A Russian aircraft, escorted by at least one Russian fighter jet, was tracked over the Baltic Sea earlier today. Jets from NATO’s Baltic Air Policing mission scrambled to identify the aircraft which flew close to Allied airspace. Once identification of the aircraft had taken place, the NATO jets returned to bass. NATO has no information as to who was on board," the official stated.

A 41-second-long video shot from inside Shoigu's aircraft shows the Su-27 escorting the plane. Then it zooms to the Spanish Air Force F/A-18 flying alongside the Defense Minister's aircraft.. Soon one of the Su-27s escorting the Russian Defense Minister's plane is seen moving in between the two aircraft following which the F/A-18 banks towards the left, ascends and then flies away from the Russian jets.

The Russian Defense Minister was flying from Moscow to Kaliningrad where he attended the Nakhimov Naval Academy expansion stone-laying ceremony and the Seaborne Assault competition at the Khmelevka proving ground in which over two dozen countries are taking part. Kaliningrad is surrounded by NATO members Poland and Lithuania.