A masterpiece of aviation science and technology, the Su-47 has an unusual forward-swept wing and is made of composite materials and not titanium or aluminium. While it never entered service, the Su-47 served as a technology demonstrator for many features now incorporated in the Su-57. 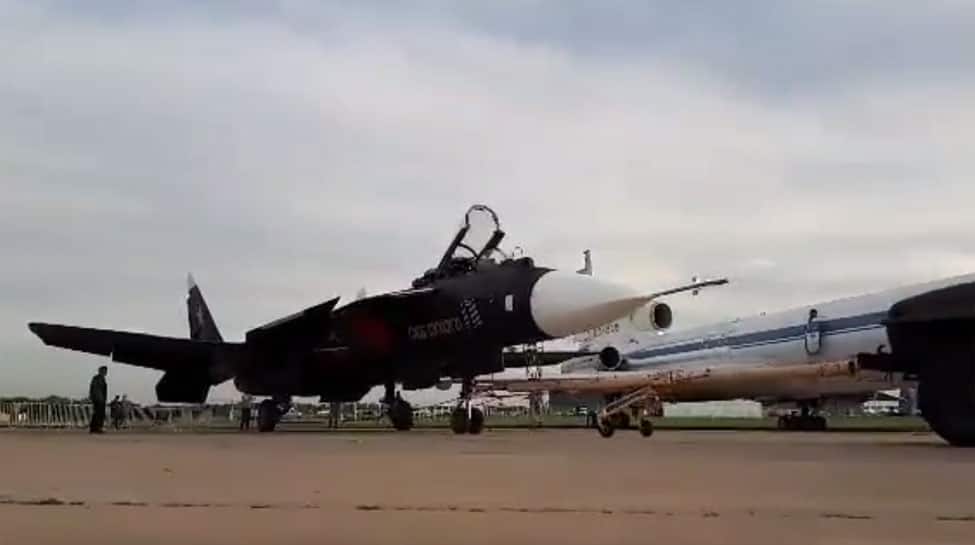 A mysterious, supersonic, experimental combat aircraft from the legendary Sukhoi series of fighters was the cynosure of aviation and defence experts on Monday at the International Aviation and Space Salon MAKS-2019 being held at Zhukovsky International Airport, near Moscow. The black-coloured experimental jet was the Sukhoi Su-47 Berkut (Golden Eagle), an aircraft which never entered full production but became the base for the development of Su-57, the 5th Generation supersonic stealth fighter.

A masterpiece of aviation science and technology, the Su-47 has an unusual forward-swept wing and is made of composite materials and not titanium or aluminium, which ensures that the plane is highly manoeuvrable, even at lower speeds. The forward-swept wings also give the aircraft high angles of attack, ensures protection against stalling and spinning, greater range due to a decrease in air resistance with a better ability to take off and land. The plane also sports moveable canards which give it unprecedented manoeuvrability and lift.

Only one Su-47 was ever made as the development programme became a victim of the disintegration of USSR. While it never entered service, the Su-47 served as a technology demonstrator for many features now incorporated in the Su-57.

Some of the technologies tested on the Su-47 included new flight control, design characteristics due to its forward-swept wings, advanced digital fly-by-wire flight control system, composite materials like carbon fibre. The Su-47, sometimes called the S-32 or S-37 during the test phase, was last seen at MAKS-2007.

Designed by aerospace engineer Mikhail Aslanovich Pogosyan, the former Sukhoi general director of Sukhoi and the United Aircraft Corporation, the Su-47 is a single-crew, twin-engine jet with a length of 22.6 metres, wingspan 15.16m to 16.7m and a height of 6.3m. The jet has an empty weight of 16,375 kilogrammes, loaded weight of 25,000 kg with the maximum takeoff weight of 35,000 kg.

However, the Su-47 is not the only forward-wing design aircraft to have been built. The United States of America had in 1984 started the Grumman X-29 aircraft programme which had forward-swept wings with large canards and fly-by-wire flight controls.