"All evidence available leads the Commission to conclude that there are reasonable grounds to believe Syrian forces dropped an aerial bomb dispersing sarin in Khan Sheikhun," the report said. 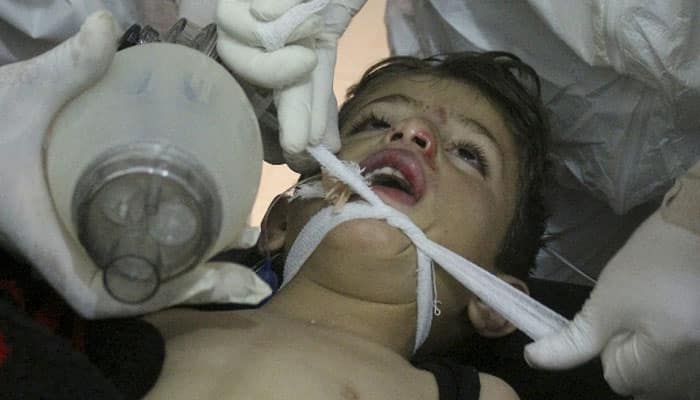 Geneva: United Nations war crimes investigators on Wednesday said they had evidence that Syrian government forces were behind a chemical attack that killed dozens of people in Khan Sheikhun in April.

In the first UN report to officially blame Damascus, the UN Commission of Inquiry (COI) on Syria said it had gathered an "extensive body of information" showing the Syrian airforce was behind the horrific sarin gas attack on April 4.

"All evidence available leads the Commission to conclude that there are reasonable grounds to believe Syrian forces dropped an aerial bomb dispersing sarin in Khan Sheikhun," the report said.

At least 83 people, a third of them children, were killed and nearly 300 wounded in the attack on Khan Sheikhun, a town in the opposition-held northern province of Idlib, it said.

The Syrian Observatory for Human Rights, a Britain-based monitor, has previously given a death toll of at least 87.

Syria`s government has denied involvement and claims it no longer possesses chemical weapons after a 2013 agreement under which it pledged to surrender its chemical arsenal.

A fact-finding mission by the UN`s chemical watchdog, the OPCW, concluded earlier this year that sarin gas was used in the attack, but did not assign blame.

A joint UN-OPCW panel is currently working to determine whether Syrian government forces were behind the attack.But Wednesday`s report is the first from the UN to officially lay the blame for the attack on Damascus.

The report also found the Syrian government responsible for at least 23 other chemical attacks in the war-ravaged country since March 2013.

The investigators, who have never been granted access to Syria, said they based their findings on photographs of bomb remnants, satellite imagery and eyewitness testimony.

They determined that a Su-22 fighter bomber, which is only operated by the Syrian air force, conducted four airstrikes in Khan Sheikhun at around 6:45 am on April 4.

"The Commission identified three of the bombs as likely OFAB-100-120 and one as a chemical bomb," the report said, adding that "photographs of weapon remnants depict a chemical aerial bomb of a type manufactured in the former Soviet Union."

The investigators said they had found no evidence supporting Syrian and Russian claims that the chemicals had been released when an air strike hit an opposition weapons depot in the area producing chemical munitions.

Their report, which covers the period from March 1 to July 7, also found that Syrian government forces had carried out chemical attacks on at least three other occasions since March — in Idlib, Hamah and eastern Ghouta — using weaponised chlorine.The report is the 14th from the COI, which has been tasked with detailing atrocities in the Syrian conflict that has killed more than 330,000 people since 2011.

But despite documenting information about dozens of possible war crimes and crimes against humanity, the commission`s work has not yet led to any prosecutions.

That has fuelled criticism and questions about the panel`s usefulness, including from commission member Carla Del Ponte, who announced last month she was quitting, citing the failure to secure indictments.

Reacting to Wednesday`s finding, Human Rights Watch noted that "those responsible for chemical attacks in Syria have faced no real consequences."

"As evidence mounts, both the UN Security Council and the OPCW should take concrete measures to increase the pressure on the Syrian government to end the use of chemical weapons and to hold those responsible to account."