If you thought lawmakers in your country are the rowdiest, you may be proven wrong. Unless of course, you are reading this in Kosovo. 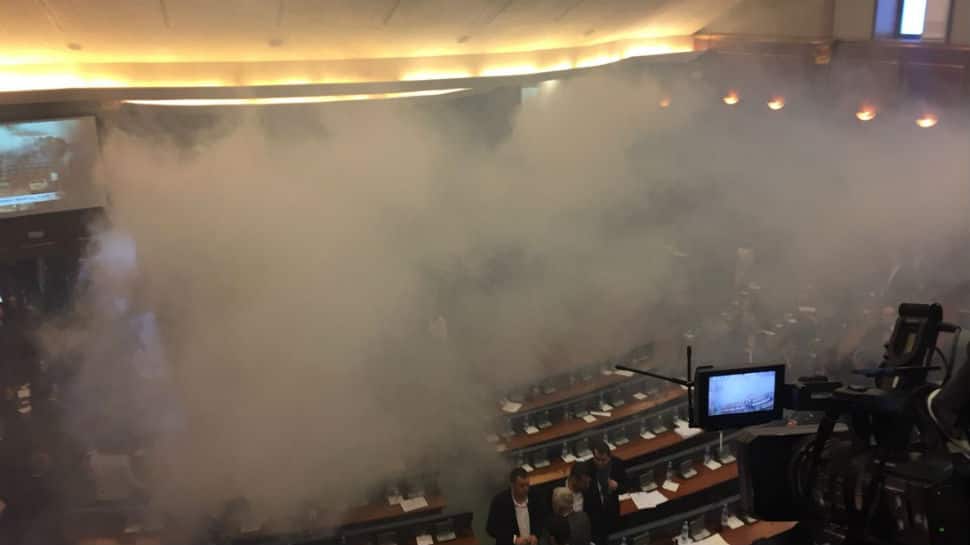 Pristina: Tear gas was repeatedly lobbed into the Kosovo parliament on Wednesday but it did not stop MPs ratifying a border agreement with Montenegro seen as key for Pristina`s bid to join the EU.

The agreement, negotiated with Montenegro in 2015, is crucial for Kosovo to obtain visa-free travel in the European Union and eventually join the bloc.

Thick smoke had filled parliament and MPs had to evacuate, an AFP correspondent said, but at the fifth time of asking the vote finally went ahead in the evening. Eighty of the 120 MPs voted for, fulfilling the requirement for a two-thirds majority.

"The ball is now in the European Commission`s camp," tweeted President Hashim Thaci, looking forward to an end to "decades of isolation".

The party has firmly opposed the border deal claiming it would deprive the Balkan nation of 8,000 hectares of forest and mountain pasture. Vetevendosje MPs have used tear gas to disrupt parliament several times in the past, notably to try to stop Thaci`s election in 2015, agreements with Serbia in 2016 and earlier efforts to pass the Montenegro deal.

Prime Minister Ramush Haradinaj told deputies Tuesday that the vote was "one of the most important matters for the country."

"Voting for (the ratification) does not endanger Kosovo`s territory," said Haradinaj, who opposed the deal before taking over as prime minister last year.

The international community had repeatedly called on Pristina to resolve the issue.

"Violence as a political tool has no place in Kosovo," said US ambassador to Kosovo Greg Delawie in a tweet Wednesday.

EU representative Nataliya Apostolova also tweeted saying she was "shocked that in Europe members of parliament could resort to such dangerous tactics."

The Montenegrin parliament swiftly ratified the agreement after it was reached in 2015. But in neighbouring Kosovo, the previous government failed to secure a majority and finally fell in mid-2017.

Kosovo, home to some 1.8 million people mostly ethnic Albanians, unilaterally proclaimed independence from Serbia in 2008 after a bitter war in 1998-1999.