The unrest began in June in opposition to a now-suspended extradition bill, and have since grown to include broader demands. 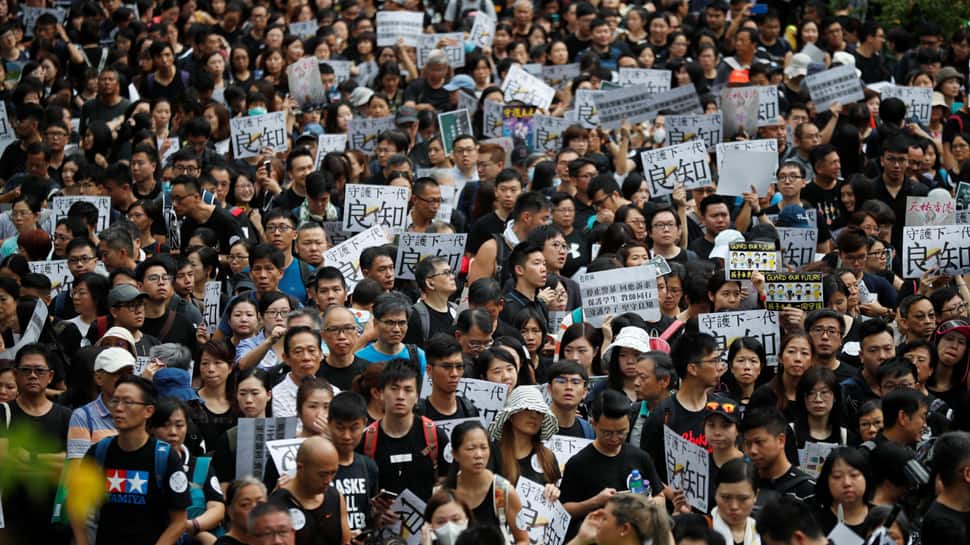 Thousands of school teachers joined an 11th weekend of anti-government protests in Hong Kong on Saturday, as shops pulled down their shutters and braced for another restive summer night. Weeks of increasingly violent demonstrations have plunged the city into turmoil. Water-filled barricades fortify the airport and government offices. Posters showing bloody clashes are stuck on street corners and there is a protest nearly every night.

The unrest began in June in opposition to a now-suspended extradition bill, and have since grown to include broader demands.

Following an escalation in violence over the past few days, rallies on Saturday and Sunday are a test of whether the movement can retain the broad support it has appeared to enjoy.

Saturday's mostly peaceful protest suggested that it may - though thousands also attended a pro-police counter-rally, and a clearer picture is not likely to emerge until Sunday when a protest is scheduled that could draw tens of thousands.

"The government has been ignoring us for months. We have to keep demonstrating," said CS Chan, a maths teacher at a rally of teachers, which police said up to 8,300 people had attended, in heavy rain. Organisers said 22,000 were present.

Demonstrators say they are fighting the erosion of the "one country, two systems" arrangement that has enshrined some autonomy for Hong Kong since China took it back from Britain in 1997.

During the past week they have increasingly directed their frustration toward police, who have responded with fiercer determination to clear them from the streets.

As storms cleared, anti-government demonstrators also marched through Kowloon - the main built-up area on the mainland side of Hong Kong harbour - while large pro-police crowds rallied in a harbourside park across the bay.

"I'm heartbroken to see the city being split up like this," a retired telecoms technician, Michael Law, 69, told Reuters at the pro-police rally. "What the violent protesters have been doing shows no respect for Hong Kong's rule of law."

Organisers said 476,000 people attended the pro-police rally, while police said 108,000 attended. Reuters was not able to verify either estimate.

Many shops in Kowloon had shut early, even on big retail boulevards, in anticipation of clashes that have tended to turn nasty at night as front-line activists attack police.

On Saturday, protesters who had surrounded a police station soon vanished when riot officers advanced with shields and batons.

Some said they were saving their energy for Sunday, when the pro-democracy Civil Human Rights Front, which organised million-strong peaceful marches in June, has scheduled another protest.

The increasingly violent confrontations have plunged one of Asia's financial capitals into its worst crisis for decades. The unrest also presents one of the biggest challenges for Chinese President Xi Jinping since he came to power in 2012.

Hong Kong's embattled leader, Carrie Lam, has warned activists not tip their home into an abyss.

The European Union urged all sides to engage in dialogue, following other calls for restraint as Chinese paramilitary police have run drills close to the Hong Kong border.

Police in Australia also warned supporters and opponents of the Hong Kong protest movement to behave after scuffles at a rally in Melbourne.

Protesters have used slingshots to fire marbles at police, shone lasers at them and at times thrown bricks and firebombs.

Having fired tear gas to disperse protesters in the streets, and at one point in a subway station, police are warning that they could get tougher.

Although their stations have been attacked scores of times during the crisis, they have so far refrained from deploying water cannon, armoured cars or the dog squad.

They have made some 750 arrests, charging some protesters with rioting, which can attract a 10-year jail term.

But many remain on the side of the demonstrators.

Yu, a secondary school music teacher in her 40s, said she was determined to show support for protesting students, even though she did not agree with all their actions:

"I do appreciate their courage and caring about Hong Kong ... they are definitely braver than our government."

Suicide bomber kills at least 63, injures 182 at a wedding in Kabul