Trump to call for unity in State of the Union address

The president and the Democrats had a 35-day stoush over his proposed wall along the US-Mexico border, which shut down the government and postponed the address. 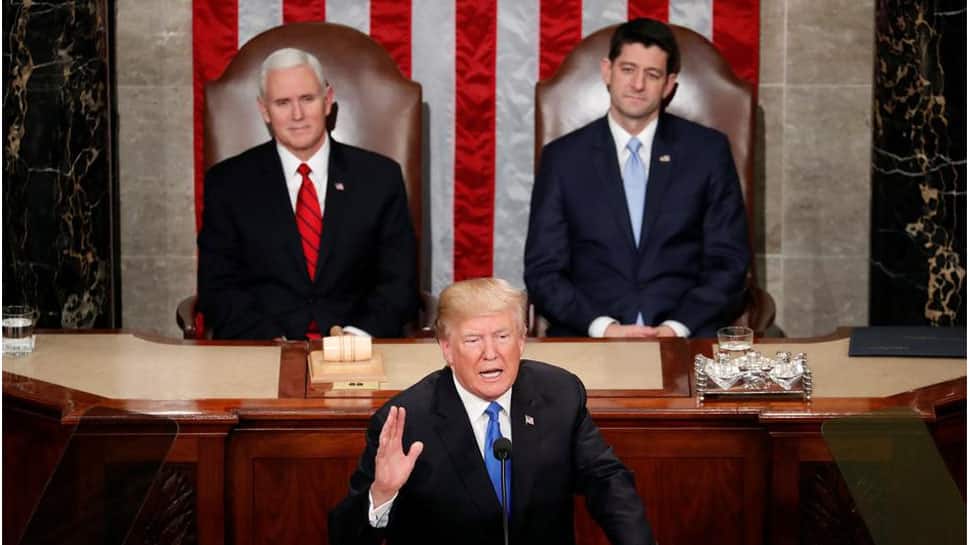 Washington: US President Donald Trump will touch on the issues like immigration, national security and trade and call for unity in a divided Congress in his annual State of the Union address as he begins the second half of his first term in office.

The annual State of the Union address is the keynote prime time speech by the president to the Congress in which he sets out his legislative agenda and national priorities for the next year and highlights his achievements to the American people.

The speech will be Trump's third to a Joint Session of Congress his initial appearance on February 28, 2017 was weeks after his inauguration and not considered a formal State of the Union. Contrary to his tweets and his frequent lashing out against the opposition Democratic leadership, Trump intends to portray a picture of national unity in resolving the challenges being faced by the country, officials familiar with preparations for the State of the Union Address said Monday.

The president and the Democrats had a 35-day stoush over his proposed wall along the US-Mexico border, which shut down the government and postponed the address. China, which is being considered as a major challenge for the United States, is expected to figure prominently in his address, which as of Monday was scheduled to last between 60 and 90 minutes.

The US and China have been locked in an escalating trade spat since early 2018, raising import tariffs on each other's goods. Last year, Trump imposed tariff hikes of up to 25 per cent on USD 250 billion of Chinese goods. The move prompted China to increase tariffs on USD 110 billion of American goods. "Choosing Greatness" is the theme of the address.

He will update Congress on the upcoming summit with North Korea, developments in Venezuela and withdrawal of troops from Syria and Afghanistan. "In his address, the president will cast an inspiring vision of American greatness. He will outline a policy agenda that both parties can rally behind to achieve this vision," a senior administration official said.

In the address on Tuesday, Trump will express confidence in future and encourage Congress to reject the politics of resistance and retribution, and instead adopt a spirit of cooperation and compromise so we can achieve it.

"Together we can break decades of political stalemate. We can bridge old divisions, heal old wounds, build new coalitions, forge new solutions, and unlock the extraordinary promise of America's future. The decision is ours to make," Trump will say in his address, as per the excerpts of the speech provided by the senior administration official.

Safe and legal immigration system; protecting American workers, rebuilding America with infrastructure; lowering the cost of healthcare and prescription drugs; and protecting America's national security, are expected to be the major topics in his speech.

"One can expect the president describing his vision for a safe and legal immigration system," the official said adding that he will reaffirm his determination to stop illegal immigration, human trafficking, and the flow of drugs and crime.

Trump will update the Congress on his fight to protect American workers who have been hurt by decades of flawed trade deals. "The President will update Congress on our trading relationship with China. He will also call on Congress to replace the NAFTA disaster by approving the United States-Mexico-Canada Agreement, said the official.

The Reciprocal Trade Act would give him authority to levy tariffs equal to those of a foreign country on a particular product if that country's tariffs are determined to be significantly lower than those charged by the United States.

It would also allow Trump to take into account non-tariff barriers when determining such tariffs. "The President will also talk broadly about rebuilding America, and he will ask Congress to produce an infrastructure package that delivers substantial investments and vital national infrastructure projects," the official said, adding that Trump will also talk about lowering the cost of healthcare and prescription drugs.

In terms of protecting America's national security, Trump will update Congress on his diplomatic and military efforts around the world, and reaffirm his determination to protect American interests, and bring to an end endless foreign wars, said the senior administration official familiar with the drafts of president's State of the Union speech.

Trump in his speech is expected to propose policies to expand prosperity and make possible an amazing quality of life for all Americans. "And then, having restored America's leadership around the world, he will cast a vision for greater security and peace, the official said.

According to the senior administration official, people will be reminded, through the speech, how much the President has accomplished for all Americans, and will be reminded of the broad appeal of his agenda.

The last two times he spoke before Congress, Trump tried to provide a unifying, bipartisan, optimistic tone, the official noted stating that he we'll be striving to do the same this year.

Describing the first speech as optimistic, second as unifying, the official said Tuesday's speech could be considered visionary in the sense that it will be looking towards the future, offering a commonsense path forward with strong bipartisan appeal that transcends the political stalemates of the past.