Turkish President Recep Tayyip Erdogan set off a diplomatic row between Iran and Turkey during his recent visit to Baku. 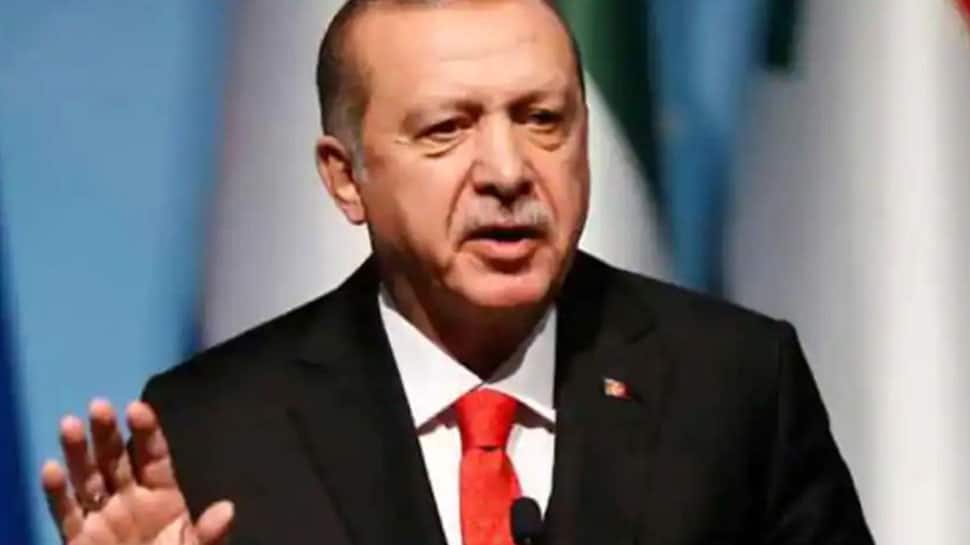 Turkish President Recep Tayyip Erdogan set off a diplomatic row between Iran and Turkey during his visit (December 10) to Baku to attend a military parade of Azerbaijani forces after reclaiming some areas of disputed Nagorno-Karabakh in November. He recited a controversial poem referring to the Aras River. The poem said  “They separated the Aras River and filled it with rocks and rods. I will not be separated from you. They have separated us forcibly.”  The river is said to be a symbol of what some Iranian Azeri separatists call the separation of Iranian Azerbaijan from The Republic of Azerbaijan. Erdogan’s intent behind the move is clearly to incite the Iranian Azeri separatists causing much of worries for Iranian leaderships.

Already having brutally trodden the sovereignty of Nagorno-Karabakh, Turkey is now hawking for other possible prey in the region to exploit Erdogan's expansionism. Iran is a suitable case for Turkey's devilish plans given its oil and gas riches and a considerable population of Azeri people in the country provides an opportunity for Turkey to execute its diplomacy there. Though the ethnic Azeri populace is in minority in Iran, many of them are in key positions. The Supreme Leader Ayatollah Ali Khamenei is himself an ethnic Azeri. Thus, successfully inciting the Azeri people towards separatism would be devastating for Iran.

Aras River starts in Turkey and then flows along the borders between Turkey and Armenia (including Nagorno-Karabakh), between Turkey and the Nakhchivan area of Azerbaijan, between Iran and both Azerbaijan and Armenia, and finally through Azerbaijan to the Kura River. The Aras gained significance as a geographic political Boundary after World War-l. It serves as the border between Russia and Iran, continental demarcation between Europe and Asia as well as separates the Republic of Azerbaijan from the two ethnic-Azeri Turk majority of Iranian provinces of Ardabil and East Azerbaijan.

Erdogan’s move may be seen as a soft tactic towards his expansionistic approach. While reciting the poem Erdogan had said that Aras will sing  stronger, those singing the Karabakh, Shikeste will breathe stronger, in reference to a traditional Azeri song. Through reciting the controversial poem Erdogan endorsed the idea of forcible separation of areas north of Aras from Iranian motherland and thus undermining the sovereignty of Iran.

Iran’s concerns that the Armenia-Azerbaijan conflict would eventually spill over inside its borders is actually finding ground after Erdogan’s remarks. During the Nagorno-Karabak war in 1994, Iranian leaders had faced immense pressure as some Azeri leaders were gearing up to start a movement for the creation of a greater Azerbaijan which included the East and West Azerbaijan provinces of Iran. This had also caused Iran to take a pro-Armenian stance in the war then, despite initially supporting Azerbaijan after its formation. Erdogan is now trying to bring in such Azeri separatist leaders into play for eventually gaining control over the Azerbaijani areas of Iran.

Turkey's plans to settle some radical Takfiri Syrian elements in the reclaimed areas of Nagorno-Karabakh also suggest that Turkey wants to create disturbances in the region for the expansion of Erdogan’s Neo Ottomanism. Moreover, the reclamation of the areas of Nagorno- Karabakh by Azerbaijan was overtly facilitated by military assistance from Turkey, elevating Iran's security concerns given Nagorno-Karabakh’s close proximity to Iran as well as Erdogan’s expansionistic ideology.

Iran has taken strong exception to the poem recited by Erdogan. Foreign Ministry summoned (December 11) Turkey's Ambassador to Iran over the remarks. Erdogan’s poem has sparked outrage on social media platforms in Iran, with many Iranian users on social media warning about the Turkish leader's “Neo-Ottomanism” ambitions against Iranian territorial integrity. Some current and former Iranian officials also warned about Turkish “expansionism.”

On the contrary, Turkish leaders and officials have been openly defending Erdogan, Foreign Minister Mevlut  Cavusoglu held a telephonic conversation with his Iranian counterpart  Javed  Zarif and notwithstanding that Erdogan’s poem was against the sovereignty of a country.  Cavusoglu  stated that remarks targeting President Erdogan was unacceptable.

Such unimpeded behavior of Turkey will eventually provide it an encouragement it to expand the domain of its expansionism in the region. In the given situation, Russia would need to play an active and explicit role to safeguard the geo-politics   of the region, whereas, international bodies needs to take cognizance of Turkey’s unilateralism and make viable efforts to keep its expansionistic approach in check.