The US move will leave its Kurdish-led partner forces in Syria vulnerable to an incursion by the Turkish Armed Forces (TSK), which brands them terrorists because of their links to Kurdish militants who have waged a long insurgency in Turkey. 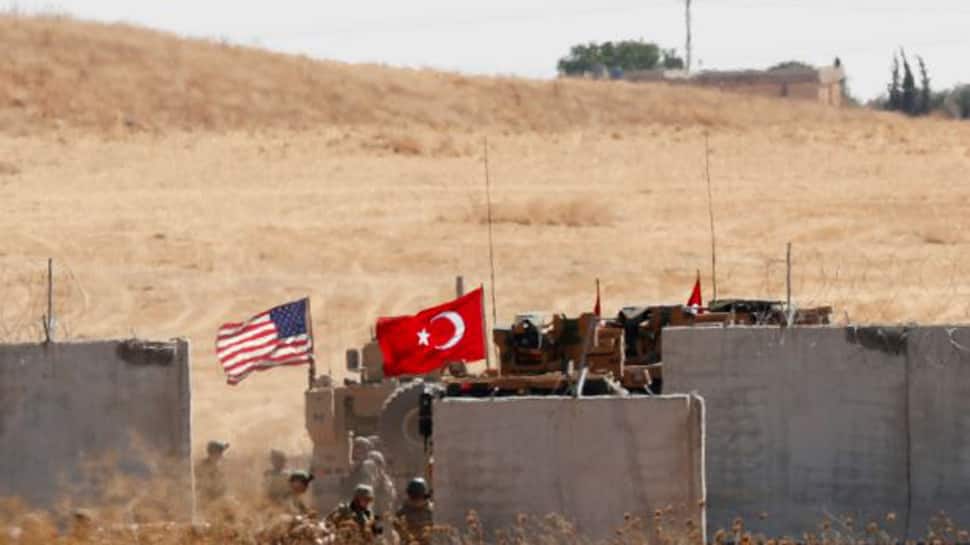 ISTANBUL: Turkey said on Tuesday it was all set to launch a military push into northeast Syria after the United States began pulling back troops, opening the way for a Turkish attack on Kurdish-led forces long allied to Washington.

But US President Donald Trump warned he would "obliterate" the NATO ally`s economy if it took action in Syria that he considered "off limits" following his decision on Sunday to pull 50 American special forces troops from the border region.

The US move will leave its Kurdish-led partner forces in Syria vulnerable to an incursion by the Turkish Armed Forces (TSK), which brands them terrorists because of their links to Kurdish militants who have waged a long insurgency in Turkey.

Signalling a further potential shift in the region`s power balance, the Kurdish-led forces said they might start talks with Damascus and Russia to fill a security vacuum in the event of a full US withdrawal from the Turkish border area.

"The TSK will never tolerate the establishment of a terror corridor on our borders. All preparations for the operation have been completed," the Turkish Defence Ministry said on Twitter early on Tuesday.

"It is essential to establish a safe zone/peace corridor to contribute to our region`s peace and stability, and for Syrians to achieve a safe life." A Reuters witness saw no sign of military activity near the Turkish border town of Akcakale, across from Syria`s Tel Abyad. Howitzers were placed behind earth embankments on Turkey`s side of the border, pointed towards Syria.

Some 60 km (37 miles) to the west, multiple launch rocket systems mounted on two trucks were deployed behind earth embankments near Suruc, opposite the Syrian border town of Kobani. Artillery was also stationed in the area, and soldiers wandered around a nearby military camp.

US forces evacuated two observation posts at Tel Abyad and Ras al Ain on Monday, a US official said. Trump`s warning on Turkey`s economy appeared aimed at placating critics who accused him of abandoning the Syrian Kurds by pulling out US forces. The decision drew criticism from Democrats and a rebuke from some of Trump`s fellow Republicans in Congress, including Senate Majority Leader Mitch McConnell.

"As I have stated strongly before, and just to reiterate, if Turkey does anything that I, in my great and unmatched wisdom, consider to be off limits, I will totally destroy and obliterate the Economy of Turkey (I`ve done before!)" Trump tweeted.

His remarks met an angry response in Turkey, including from opposition party politicians such as Iyi Party leader Meral Aksener who said it was a day to put aside domestic politics.

"Threatening Turkey`s economy is a diplomatic catastrophe," she told her party`s lawmakers in a speech in parliament. "The best response to this insolence is to go into the east of the Euphrates and break the terror corridor."

The Kurdish-led forces, who have been the most effective US partners in fighting Islamic State in Syria, have denounced the major U.S. policy shift as "stab in the back".

Mustafa Bali of the Kurdish-led Syrian Democratic Forces (SDF) said the continued Turkish military buildup on the border, together with information about further mobilisation of Turkey-backed Syrian rebels, indicated that "an attack is imminent".

"Naturally our preparations are along the length of the border with Turkey and our forces are in a state of readiness," Bali told Reuters. Syrian Kurdish official Badran Jia Kurd said Kurdish-led authorities in northern Syria may open talks with Damascus and Russia U.S. forces fully withdrew from the Turkish border area.

His comments reflect the predicament of Kurdish-led forces in northern Syria after the partial withdrawal of US troops who have effectively shielded the area from Turkish attack.

"At that time we may hold talks with Damascus or the Russian side to fill the void or block the Turkish attack, so this may develop and there could be meetings and contacts in case of a vacuum," he told Reuters.

The United States expects Turkey to take responsibility for captive Islamic State fighters in northeastern Syria if Ankara`s planned incursion seizes areas where the detained militants are held, a senior State Department official said. The captives are held in SDF facilities south of a safe zone initially proposed by Turkey.

"Turkey is determined to clear terrorists from the east of the Euphrates and protect its own security and survival while implementing a secure zone in order to achieve peace and stability," Aksoy said in a written statement.

Russia, Syrian President Bashar al-Assad`s strongest foreign ally, said it was not told in advance by Washington or Turkey about any agreements to pull U.S. troops from the northeast, adding it was watching the situation very closely.

Iran, another Assad ally, voiced opposition to any Turkish operation in Syria. "Such an action will not only not end Turkey`s security concerns but will lead to widespread material and human damage," Iran`s foreign ministry said.

The Trump administration official, briefing reporters on a conference call, said 50 US troops in the region that Turkey has targeted would be redeployed elsewhere in Syria "where they aren`t in the crossfire." The United States has about 1,000 troops in Syria.

Turkey`s lira lost 2% of its value against the dollar to hit its weakest level since early September but edged off its lows to 5.8195 on Tuesday. Turkey`s sovereign dollar bonds also came under fresh pressure.

Ties between Ankara and Washington have long been tense over a range of issues including Syria policy and Turkey`s purchase of a Russian missile defence system.