As part of the process, the F-22 pilots landed and then taxied the aircraft through safety checks and up to the "hot pit" for refuelling. The pilots did not turn off the Raptors' engine during the pitstop and received fuel directly from a truck. 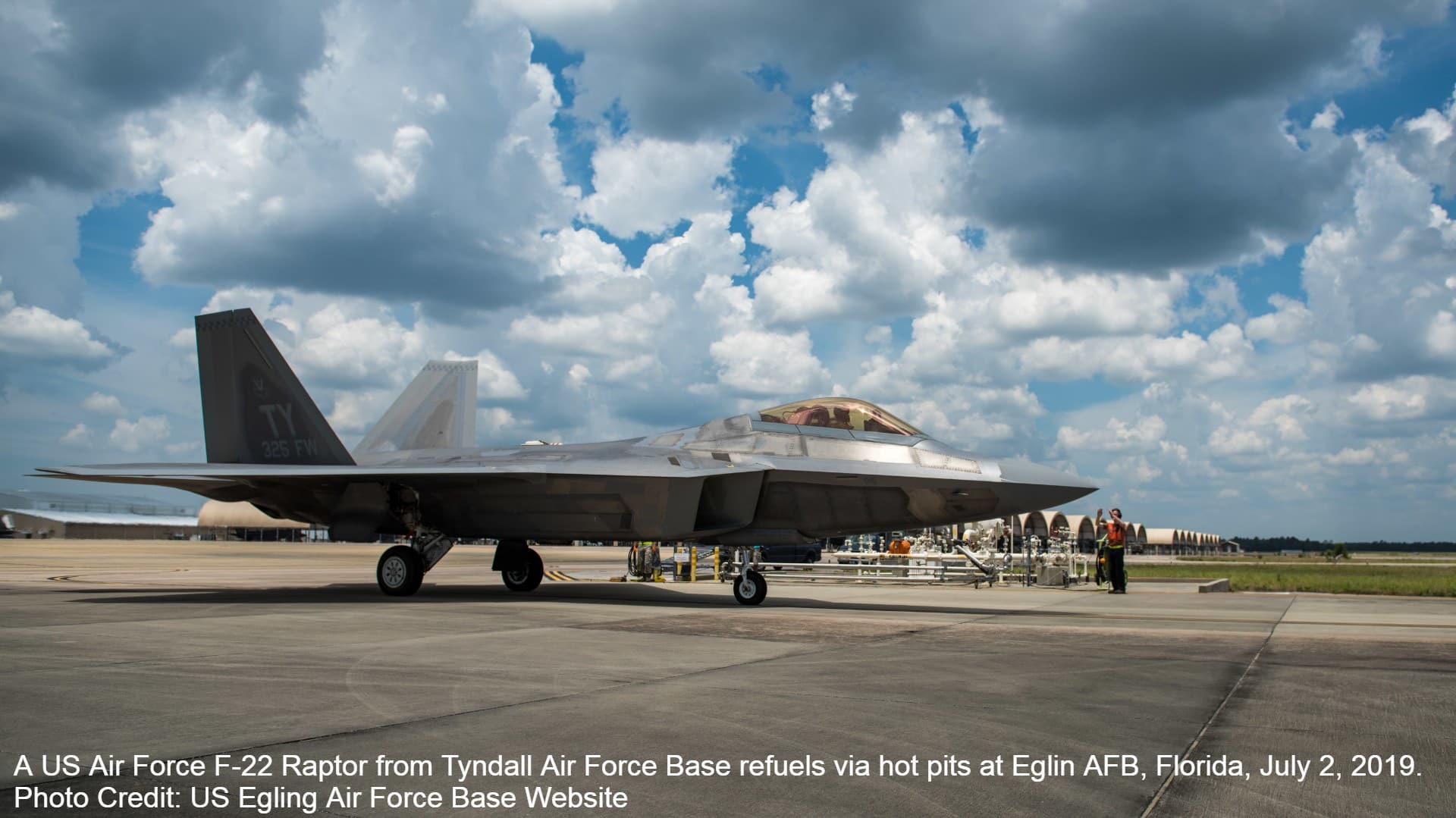 F-22 Raptor pilots of the United States of America Air Force performed the "hot seats" and "hot pits" process in order to finetune their preparation to accomplish addition sorties in the 5th Generation stealth fighter and ensure more training time in the air. Several F-22 pilots belonging to the 43rd Fighter Squadron at Tyndall Air Base in California took part in the drill which also involved the maintenance crew too.

The "hot seats" and "hot pits" drill was performed at Eglin Air Force Base on July 2, 2019, and a video of the same was posted by Tyndall Air Force Base on its Facebook page on July 17, 2019. "Hot seats" is a process where a pilot gives control of the fighter jet to another pilot, and "hot pits" refers to refuelling with the aircraft running, which gives the pilots more training time in the air.

"We're taking one pilot already in the seat of the jet when it comes back and swapping it for another pilot on the spot. That way the jet never gets officially released back to maintenance - another pilot just accepts it. (Assuming the aircraft did not record anything unsafe during flight) they do a face-to-face brief, then the incoming pilot can take the jet and launch it from there," said Staff Sargent Nicholas Peters, 325th Aircraft Maintenance Squadron crew chief of Eglin Air Force Base.

As part of the process, the F-22 pilots landed and then taxied the aircraft through safety checks and up to the "hot pit" for refuelling. The pilots did not turn off the fighter's engine during the pitstop and received fuel directly from a truck. After refuelling, the pilots took their jet to the next pilot in line, bypassing the checklist maintainers use to get the F-22 back in the air.

"Since Hurricane Michael devastated Tyndall AFB and the surrounding area, it took a lot of time, energy, and effort to bring our operation at Eglin AFB up to full capacity. During that transition, we absorbed additional pilots, from both active duty and Reserve, as a result of the 95th FS having their jets and people split up across the F-22 community," said Lieutenant Colonel Jefferey Peterson, 43rd FS director of operations. According to Peters, the fueling stations here made hot-pit refuelling ideal.

"Normally we would fly 10 (jets) on the first go and eight on the second for a total of 18 sorties. For "hot seats" we fly eight, six and six for a total of 20 sorties," added Master Sargent Dustin Holman, 325th AMXS aircraft section chief.

On a normal day, the 325th AMXS prepares 13 F-22 jets. Three are spares, while the other 10 are sent on sorties. Only 11 are needed for hot-pit refuelling and rapid crew swaps. This reduces the amount of time it takes to get a new pilot in the air; saving time and producing more sorties with less aircraft. When the team gets an opportunity, they send out 10 jets on the first go, six on a second and eight on a third, for a total of 24 sorties.

According to Holman, the 43rd FS is the first F-22 squadron to use these methods. They began practising before Hurricane Michael struck and now are using them to maximize their training time.

"Using this concept of hot pitting with rapid crew swaps, or hot seat operations as we have been calling it, our team has been able to drastically increase sortie production to levels we have never seen in the history of our organization. The hot seat operations concept has been a paradigm shift that is among the most important innovations we have put into effect since the hurricane," Peterson said.