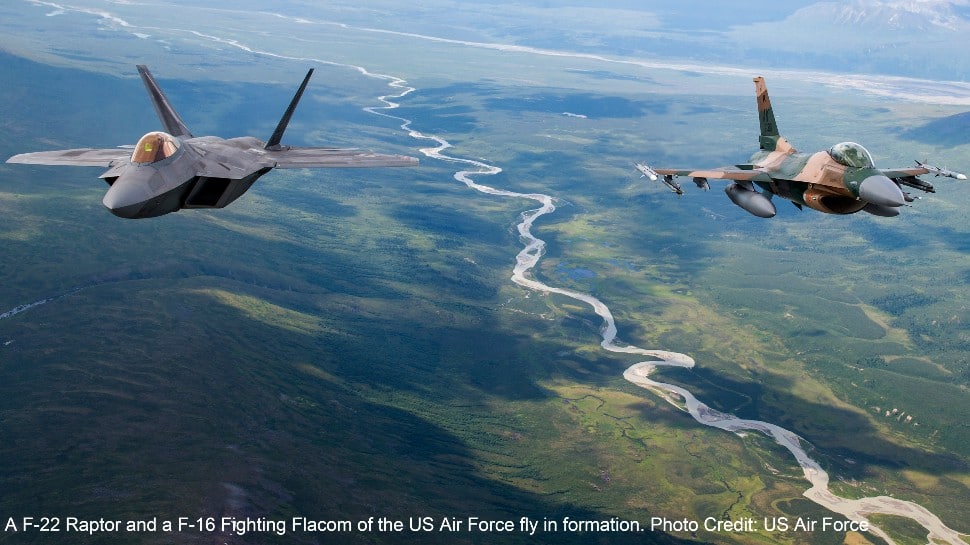 Unites States Air Force F-22 Raptors and F-16 Fighting Falcons flew sorties over the Joint Pacific Alaska Range Complex a few days back. The F-22s were from Joint Base Elmendorf-Richardson in Anchorage, Alaska while the F-16s took off from Eielson Air Force Base, about 26 miles southeast of Fairbanks, Alaska, said Staff Sargent James Richardson of the 673 Air Base Wing of the US Air Force.

While the single-seat, twin-engine F-22 is a 5th Generation stealth fighter and is in service with only the US Air Force, the 4th Generation F-16 is one of the most versatile fighters in the world flying with 26 air forces across the world. The F-22 first flew on September 7, 1997, and entered service with the US Air Force on December 15, 2005. Its origin lies in the Advanced Tactical Fighter (ATF) programme which was started in 1981 to replace the F-15 Eagle and F-16 Fighting Falcon, which first flew on January 20, 1974, and entered service on August 17, 1978.

The 5th Generation jet is primarily an air dominance fighter but is also capable of ground attack, electronic warfare, and signal intelligence. Its top speed is Mach 2.25 (2,414 kilometres per hour) at altitude. The maximum range of the F-22 is 2,963 km with two external fuel tanks while the combat radius is 851 km, service ceiling 20 km and g limits +9.0/−3.0.

There is a large internal weapons bay on the bottom of F-22 fuselage, and two smaller bays on the sides of the fuselage to ensure stealth and minimum drag. The fighter's wings have four hardpoints, each of which can carry a load of 2,300 kilogrammes which can be either a weapon or an external fuel tank. The combat aircraft also carries an internal M61A2 Vulcan 20 mm rotary cannon with 480 rounds of ammunition.

The General Dynamics F-16 Fighting Falcon started as an air superiority day fighter and then slowly developed into a multirole combat jet. With nine hardpoints available, the F-16 can carry air-to-ground missiles, rockets, bombs, electronic countermeasures (ECM), navigation, targeting pods and even external fuel tanks to increase its range. The fighter also has one M61A1 Vulcan 20 mm cannon with 511 rounds.