US-backed fighters said they had taken positions in Islamic State`s last enclave in eastern Syria and air strikes pounded the tiny patch of land beside the Euphrates River early on Monday, a Reuters journalist said. 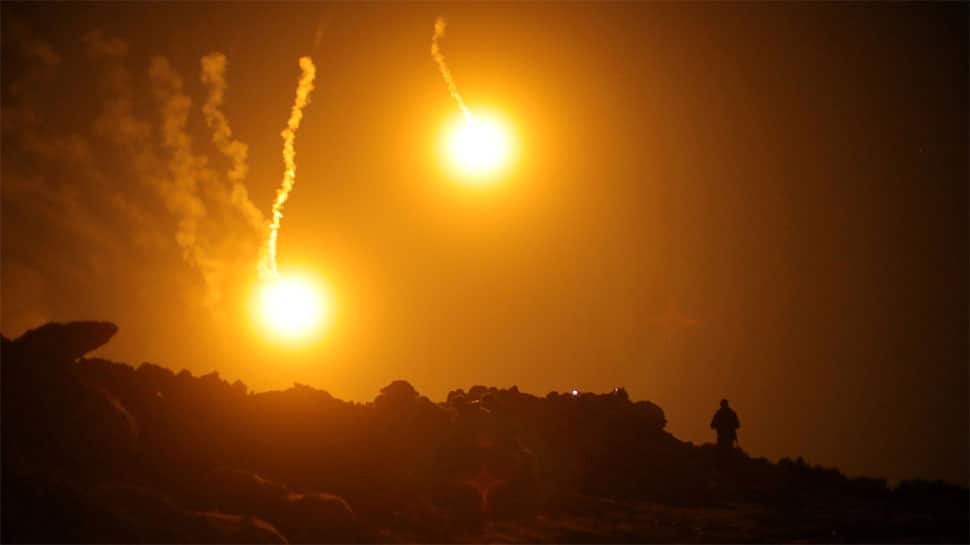 Flares are seen in the sky during fighting in the Islamic State''s final enclave, in the village of Baghouz (REUTERS FILE PHOTO)
Share:
Updated:
Mar 19, 2019, 08:01 AM IST
Source:
Reuters

BAGHOUZ: US-backed fighters said they had taken positions in Islamic State`s last enclave in eastern Syria and air strikes pounded the tiny patch of land beside the Euphrates River early on Monday, a Reuters journalist said.

Smoke rose over the tiny enclave as warplanes and artillery bombarded it. Another witness said the jihadists had earlier mounted a counter attack.

The Syrian Democratic Forces (SDF) militia said in an update on Monday that tens of militants had been killed during what it called fierce clashes, and one SDF fighter had been injured. It said Islamic State had sent four suicide bombers to points close to SDF fighters.

Late on Sunday, an SDF spokesman, Mustafa Bali, said on Twitter that several enemy positions had been captured and an ammunition storage area had been blown up.

The enclave resembles an encampment, filled with stationary vehicles and rough shelters with blankets or tarpaulins that could be seen flapping in the wind during a lull in fighting as people walked among them.

An Islamic State spokesman said on Monday the displacement of "the weak and poor" from Syria`s Baghouz would not weaken the group.

"Do you think the displacement of the weak and poor out of Baghouz will weaken the Islamic State? No," Abi al-Hassan al-Muhajer said in a recording distributed by Al Furqan, a media organisation linked to Islamic State. He added "the Islamic State will return, God willing, to the regions it left whether it takes a long or a short time."

In the recording al-Muhajer also said Islamic State leader Abu Bakr al-Baghdadi urged the group to avoid using telecommunications devices as they had brought harm, and to take caution.

Backed by air power and special forces from a U.S.-led coalition, the SDF has pushed Islamic State from almost the entire northeastern corner of Syria, defeating it in Raqqa in 2017 and driving it to its last enclave at Baghouz last year.

Late on Sunday, the Kurdish Ronahi TV station aired footage showing a renewed assault on the enclave, with fires seen to be raging inside and tracer fire and rockets zooming into the tiny area.

The SDF has waged a staggered assault on the enclave, pausing for long periods over recent weeks to allow mostly women and children who are families of suspected fighters to pour out.

Women and children leaving have spoken of harsh conditions inside, under coalition bombardment and with food supplies so scarce some resorted to eating grass.

Former residents also say hundreds of civilians have been killed in months of heavy aerial bombing by the coalition that have razed many of the hamlets in the area along the Iraqi border.

The coalition says it take great care to avoid killing civilians and investigates reports that it has done so.

Last month, the SDF said it had found a mass grave in an area it captured. Former residents say those buried were victims of coalition air strikes.

The SDF and the coalition say the Islamic State fighters inside Baghouz are among the group`s most hardened foreign fighters, although Western countries believe its leader, Abu Bakr al-Baghdadi, has left the area. The group issued a propaganda film from inside the enclave last week calling on its supporters to keep faith.

While Islamic State`s defeat at Baghouz will end its control of inhabited land in the third of Syria and Iraq that it captured in 2014, the group will remain a threat, regional and Western officials say.