Trump, who declared the national emergency this month after Congress declined his request for $5.7 billion to help build a border wall, vowed last week to veto the measure if it passes both chambers. 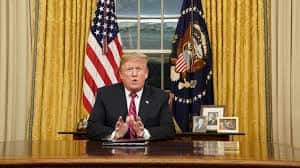 WASHINGTON: The US House of Representatives votes on Tuesday on a resolution to terminate President Donald Trump’s declaration of a national emergency to build a wall on the border with Mexico. House Democrats introduced the resolution last week, challenging Trump`s assertion that he could take money Congress had appropriated for other activities and use it to build the wall.

The resolution is expected to sail easily through the Democratic-controlled House. Action then moves to the Republican-majority Senate, where the measure`s future is uncertain even though it only requires a simple majority to pass.

While Tuesday`s vote will be another chapter in a long-running fight between Trump and Democrats over border security and immigration policy, it also will be a test of constitutional separation of powers, as it is the House and Senate that primarily dictate spending priorities, not the president.

The No. 2 House Democrat, Representative Steny Hoyer, said at a press conference on Monday that he had traveled to the US-Mexico border twice in the past few weeks. "What I concluded is there is no crisis at the border. The issue ... will be whether there is a crisis of our constitutional adherence," Hoyer said.

At least two Republican senators, Susan Collins and Lisa Murkowski, have told the media they are likely to vote for the measure. But at least another two Republican votes would be needed if the resolution is to pass that chamber, assuming all Democrats and two independents back it.

Trump, who declared the national emergency this month after Congress declined his request for $5.7 billion to help build a border wall, vowed last week to veto the measure if it passes both chambers.
Congress would then have to muster the two-thirds majority necessary - a high hurdle - to override the president`s veto in order for the measure to take effect.

A bipartisan group of 58 former national security officials issued a statement Monday saying there was no "factual basis" for Trump`s emergency declaration. Lawmakers must not allow "any president (to) on a whim declare emergencies, simply because he or she can`t get their way in the Congress," Senate Democratic Leader Chuck Schumer declared Monday.

Schumer warned Trump`s emergency declaration "could cannibalize funding from worthy projects all over the country," noting that the administration had not even decided yet what projects to take the funds from.

About 226 House lawmakers are co-sponsoring the bill, including all but a handful of Democrats as well as one Republican, Justin Amash. The issue is also in the courts. A coalition of 16 US states led by California have sued Trump and top members of his administration to block his emergency declaration.

Congress this month appropriated $1.37 billion for building border barriers following a battle with Trump, which included a 35-day partial government shutdown - the longest in US history - when agency funding lapsed on December 22.