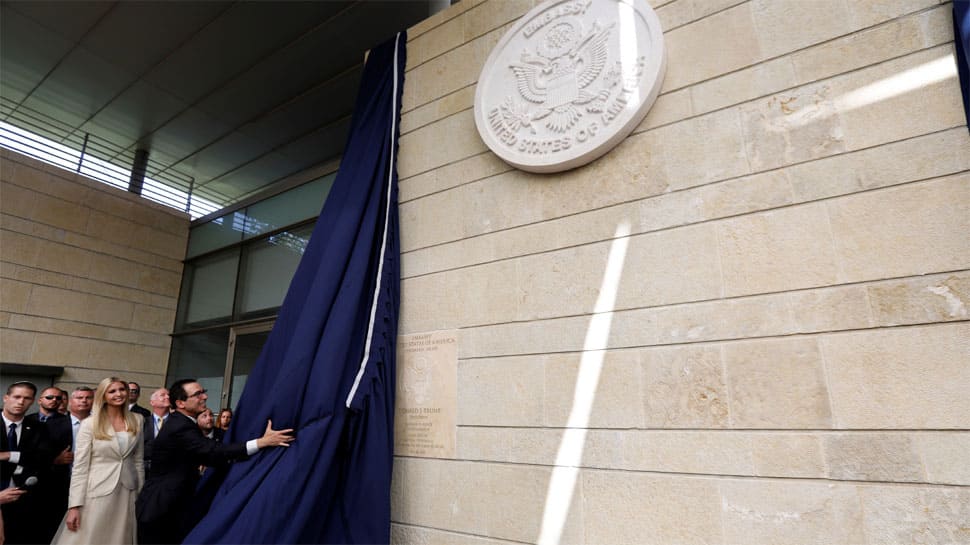 Jerusalem: The US on Monday opened its embassy in Jerusalem under a controversial move by President Donald Trump that has infuriated the Palestinians, who clashed with Israeli soldiers who shot dead at least 37 of them in Gaza, in the deadliest escalation of violence since 2014.

Trump announced the decision to move the embassy from Tel Aviv to Jerusalem in December, when he formally recognised the holy city as the capital of Israel, breaking away from decades of US neutrality on the sensitive issue.

The inauguration ceremony started with the singing of the American anthem and the presentation of colours by US Marines.

US Ambassador to Israel David Friedman noted that Washington, which became the first country to recognise the State of Israel, has now taken "a step awaited, voted upon, and litigated and prayed for all these years".

"Again the United States leads the way," in relocating the embassy, he said.

The move is the result of the "vision, the courage, and the moral clarity" of President Trump, to whom we own an "enormous and eternal debt of gratitude," the US envoy stressed.

Trump, in an early morning tweet, hailed the opening of the US embassy in Jerusalem as "a great day for Israel."

He made no reference to the violence in an early morning tweet but said, "A great day for Israel!"

"What an amazing day! Thank you, @POTUS Trump," he tweeted in response to Trump's announcement.

"Today is an historic day that constitutes a milestone in the history of our people, our state, and our alliance," the Israeli prime minister said.

Meanwhile, Palestinians, who protested massively along the Gaza border clashed with Israeli forces, leading to the death of at least 37 of them.

Hamas-run health ministry in Gaza said that 37 people had been killed in Israeli fire so far and 1,700 others injured.

The Palestinian protestors burned tires and threw stones at the soldiers, trying to approach the fence.

The Palestinian Authority headed by President Mahmoud Abbas' Fatah party and headquartered in the West Bank town of Ramallah accused Israel of committing a "terrible massacre" as the death toll soared.

Seeking international intervention, Palestinian government spokesman Yusuf al-Mahmoud said that it was an urgent requirement given "the terrible massacre in Gaza committed by the forces of the Israeli occupation against our heroic people".

The death toll made it the deadliest day in the Israeli-Palestinian conflict since the 2014 Gaza war.

The 37, including a 14-year-old, were shot dead by Israeli forces as clashes broke out at five points along the Gaza border hours before the opening of the embassy.

The Israel Defense Forces (IDF) released a statement accusing Hamas, which controls Gaza, of "leading a terrorist operation" and inciting protesters who had amassed by the border fence with Israel to conduct what Israel described as terror attacks.

The IDF estimated that around 35,000 people -- who it describes as "violent rioters" -- had assembled in 12 different locations along the border fence between Gaza and Israel and thousands more were gathered in a tent city about a kilometer from the border.

The military said the protesters threw Molotov cocktails, burned tyres, and stones at Israeli soldiers positioned along the fence.

The State Department noted that the opening of the new embassy will take place on the 70th anniversary of American recognition of the State of Israel, the day of its founding and a day that Palestinians refer to as "the Catastrophe," as hundreds of thousands fled their homes.

The Embassy move is contentious for Palestinians, who hope to claim part of the city as their future capital, and for many in the Arab world, as it is home to some of the holiest sites in Islam. The city is also home to deeply holy sites for Jews and Christians.

The issue has been so thorny that international negotiators had left the question of Jerusalem to the final stages of any peace deal.