Some two dozen officers attacked a National Guard outpost in the Caracas neighborhood of Cotiza, a kilometer (0.6 mile) from the presidential Miraflores palace, where they met "firm resistance," the government said. 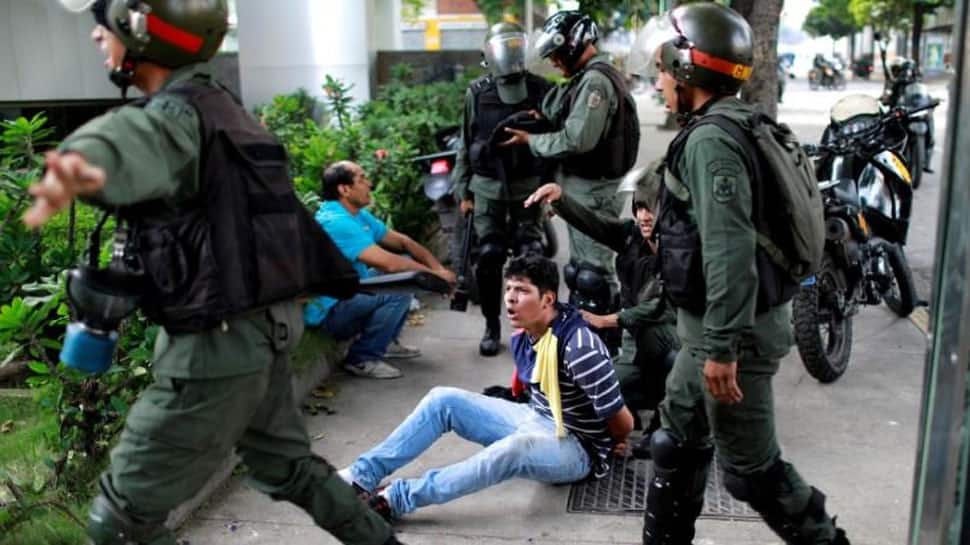 CARACAS: Venezuela`s government said on Monday it had suppressed a military revolt after a group of officers stole weapons and kidnapped several officials, as a video posted online showed a sergeant demanding the removal of President Nicolas Maduro.

Some two dozen officers attacked a National Guard outpost in the Caracas neighborhood of Cotiza, a kilometer (0.6 mile) from the presidential Miraflores palace, where they met "firm resistance," the government said. Witnesses reported hearing gunshots at about 3 a.m. (0700 GMT).

Protesters later burned trash and a car outside the outpost, where the 25 officers were arrested, in a sign of growing tensions following Maduro`s inauguration to a second term that governments around the world have called illegitimate. Though the incident signals discontent within the armed forces, it appeared to involve only low-ranking officers with little capacity to force change in the hyperinflationary economy as many people suffer from shortages of food and medicine.

"The armed forces categorically reject this type of action, which is most certainly motivated by the dark interests of the extreme right," the government said in a statement read out on state television.
Maduro was inaugurated on Jan. 10 under an avalanche of criticism that his leadership was illegitimate following a 2018 election widely viewed as fraudulent, with countries around the world disavowing his government.

Opposition leaders and exiled dissidents have called on the armed forces to turn against Maduro, which the president has denounced as efforts to encourage a coup against him. The opposition-controlled congress`s head, Juan Guaido, said the uprising was a sign of the armed forces` discontent. Congress was committed to offering guarantees to officers who helped with "the constitution`s reconstitution," he said, though he did not want the military to fall into internal conflict.

"We want it to stand as one man on the side of the people, the constitution, and against the usurpation," he said on Twitter. Venezuela`s pro-government Supreme Court ruled on Monday that it did not recognize Guaido as head of congress and declared that all the body`s actions were null and void.

Guaido, who was elected to head Congress on Jan. 5, has said he is willing to replace Maduro as interim president if he has the support of the military, with the aim of then calling free elections. Congress declared Maduro an "usurper" last week.

In the videos that circulated on Twitter, a group of armed soldiers stood in darkness apparently at the Cotiza outpost while their leader addressed the camera and called for Venezuelans to support their revolt.  "You all asked that we take to the streets to defend the constitution. Here we are. Here we have the troops. It`s today when the people come out to support us," said the man in the video, who identified himself as Luis Bandres.

The government said the officers took two vehicles from a police station in the western Macarao district before driving across the city to a barracks in the eastern Petare slum, where they stole an arms cache and kidnapped four officials.

After they attacked the Cotiza outpost, security forces surrounded them. In response, several dozen residents barricaded streets and set fire to rubbish as they chanted "Don`t hand yourself in," according to Reuters witnesses. Troops fired tear gas to disperse them.

"These soldiers are right to rise up. We need a political change, because we don`t have any water or electricity," said Angel Rivas, a 49-year-old laborer at the protest. Diosdado Cabello, president of the Constituent Assembly, an all-powerful legislature, said authorities had arrested 25 officers at the outpost and two others at an unspecified site. At a news conference, he said he "couldn`t care less" about Guaido.

The United States and many Latin American nations say Maduro has become a dictator whose failed state-led policies have plunged Venezuela into its worst ever economic crisis, with inflation approaching 2 million percent.

US President Donald Trump`s administration has indicated its support for Guaido and, according to people familiar with the matter, is considering recognizing him as Venezuela`s legitimate president.
Maduro says a U.S.-directed "economic war" is trying to force him from power.