The 1.29 second-long video shows the Typhoon jet on fire after the aircraft collided with another Eurofighter. 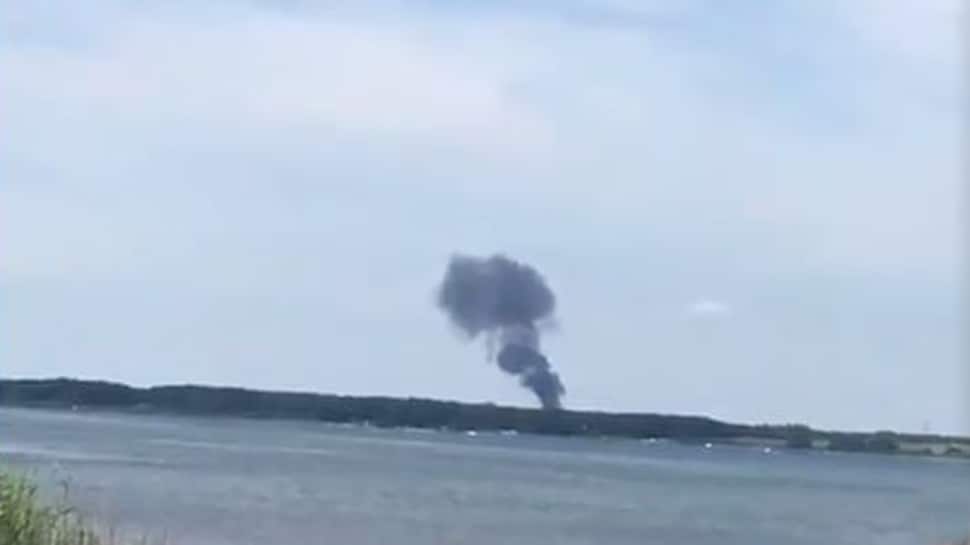 A video claiming to show a burning Eurofighter Typhoon jet of the German Air Force (Luftwaffe) plummeting to the ground has been posted on Twitter. The 1.29 second-long video posted by Matze Meisterstuck (@PiTownBBQ) shows the Typhoon jet on fire after the aircraft collided with another Eurofighter on June 24 during a training mission over the skies of Nossentiner Hutte near Lake Muritz in the Mecklenburgische Seenplatte district of Mecklenburg-Vorpommern, Germany.

However, Matze Meisterstuck claimed that the video was not shot by him but he received it via Whatsapp. The video shows the wreckage of the Typhoon falling from the sky and later a plume of smoke rises from the area where it hit the ground. The footage also has smoke billowing from a second location where the other Typhoon jet had apparently crashed.

While both pilots ejected following the mid-air collision, one of them died and the other was found alive stuck in a tree. An eyewitness had on Tuesday claimed that a wing of one of the jets was shattered following the collision while a few other people said that they saw two ejector seats shooting out from the Typhoons.

Although the pilot who survived suffered serious injuries, he is expected to recover completely, reported Deutsche Welle. According to the German Air Force, both the Typhoons were unarmed as it was a training sortie. The Bundeswehr (unified armed forces of Germany) is investigating the cause of the deadly crash, which is also the first time two Typhoon fighters have collided midair.

Deutsche Welle also reported that the German Air Force issued a statement saying the pilot killed in the crash was 27 years old and had 400 hours flight experience while the one who survived had flown fighter jets for more than 3,700 hours.

According to European defence experts, it is the seventh fatal crash of the Eurofighter Typhoon since the aircraft entered active service with the air forces of European countries in August 2003. It is also the first crash of a German Typhoon which can fly at 1,550 miles per hour (2,495 kmph).

Germany has 140 Eurofighter Typhoons and the crashed jets belonged to the Steinhoff Tactical Air Force Wing 73 Squadron in Laage. The Typhoons are manufactured jointly by a consortium of defence companies from Germany, Britain, Italy and Spain with each jet costing more than €100 million each ($114 million).

Even though Germany is an economic superpower and a very important North Atlantic Treaty Organisation (NATO) but German weekly news magazine Der Spiegel had in 2018 reported that the Bundeswehr had only four out the 140 Eurofighters in its arsenal combat-ready.