The western media chose to refrain from using the word -- terrorist and simply referred to him as a gunman.

A white supremacist terrorist on Friday opened fire on Muslim worshippers at two mosques in New Zealand killing at least 49 and injuring 20 others. The terror attacks took place on the Al Noor Mosque in central Christchurch and the Linwood Mosque in the city's outer suburb.

The terrorist entered the mosque and started shooting indiscriminately and repeatedly at the worshippers, covering the entire mosque. The attack clearly shows that it was a terror strike where the aim of the man, carrying automatic assault rifles, was only to take innocent lives.

However, the western media chose to refrain from using the word -- terrorist and simply referred to him as a gunman.

We take a look at how the western media reported the terrorist attack as an attack by a gunman: 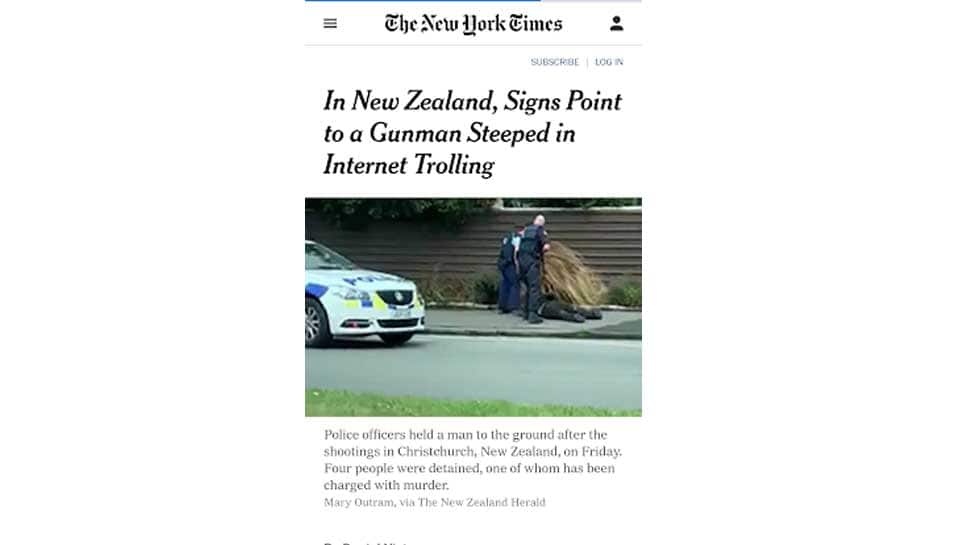 In New Zealand, Signs Point to a Gunman Steeped in Internet Trolling: A camera mounted to his head, the gunman who livestreamed part of his savage attack on two mosques in Christchurch, New Zealand, on Friday began his video by casually making reference to a current internet meme. He appeared to be steeped in the culture of the extreme-right internet. And in the terrible minutes of video that followed, he proved to be a nonchalant, unrepentant killer.

Christchurch shootings: 49 dead in New Zealand mosque attacks-Forty-nine people have been killed and at least 20 wounded in shootings at two mosques in Christchurch, New Zealand. A gunman identifying himself as an Australian live-streamed the rampage at Al Noor mosque to Facebook. He had espoused racist anti-immigrant views. 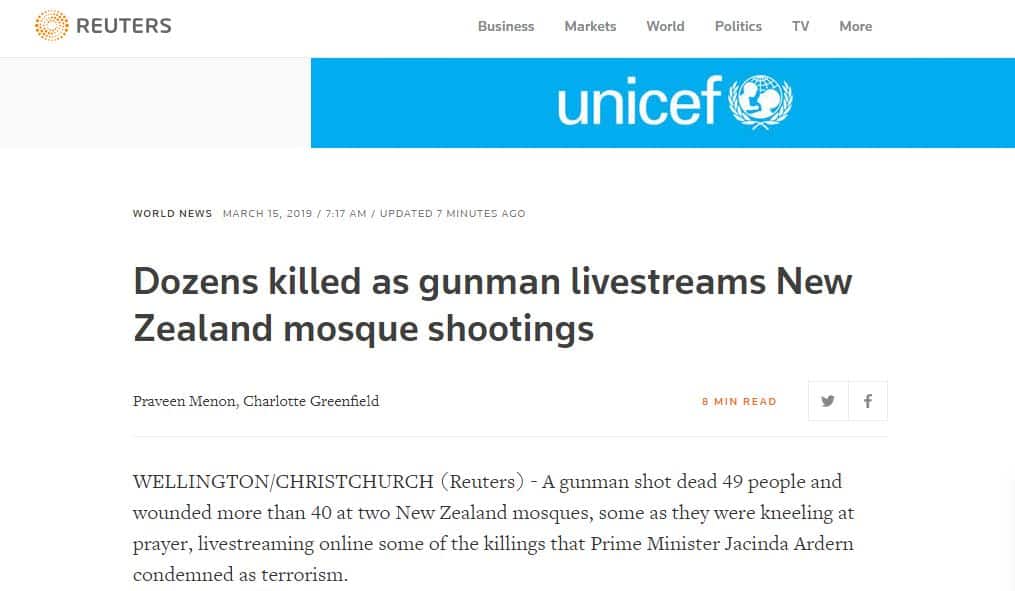 Dozens killed as gunman livestreams New Zealand mosque shootings: A gunman shot dead 49 people and wounded more than 40 at two New Zealand mosques, some as they were kneeling at prayer, livestreaming online some of the killings that Prime Minister Jacinda Ardern condemned as terrorism. The gunman broadcast footage of the attack on one mosque in the city of Christchurch on Facebook, mirroring the carnage played out in video games, after publishing a “manifesto” in which he denounced immigrants, calling them “invaders”. 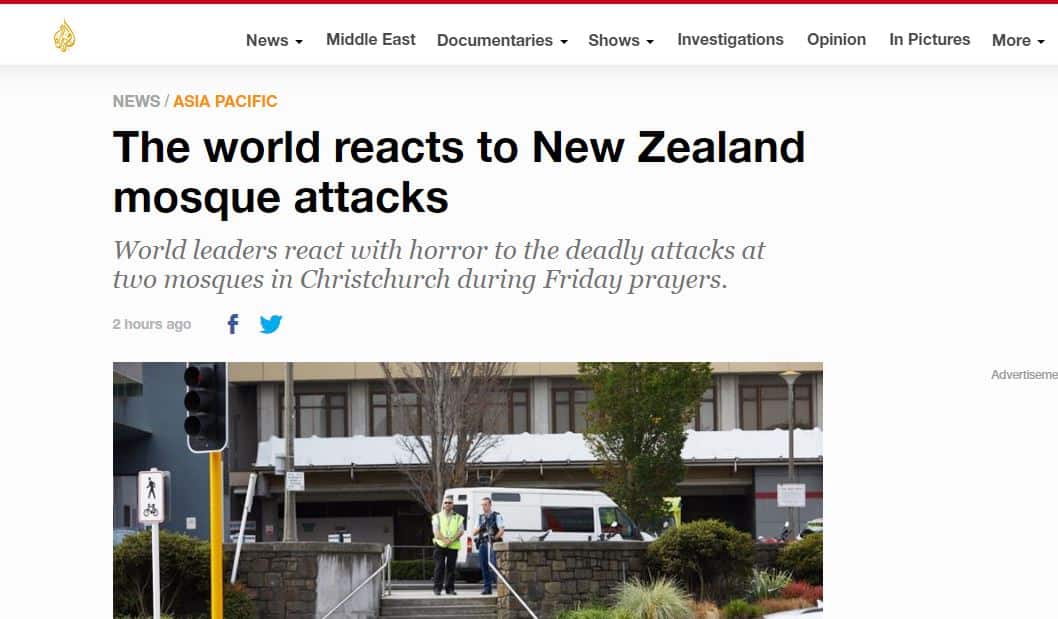 The world reacts to New Zealand mosque attacks: Political and religious leaders from across the world have expressed their condemnation at the deadly shooting at two mosques in New Zealand city of Christchurch. Forty-nine people were killed and at least 20 suffered serious injuries in the shootings targeting the mosques during Friday prayers. Police said three men and a woman were in custody in connection with the attacks. The timing of the shootings and the posting on social media of what appeared to be live, point-of-view video footage of the assault by a gunman, added to the distress of many. 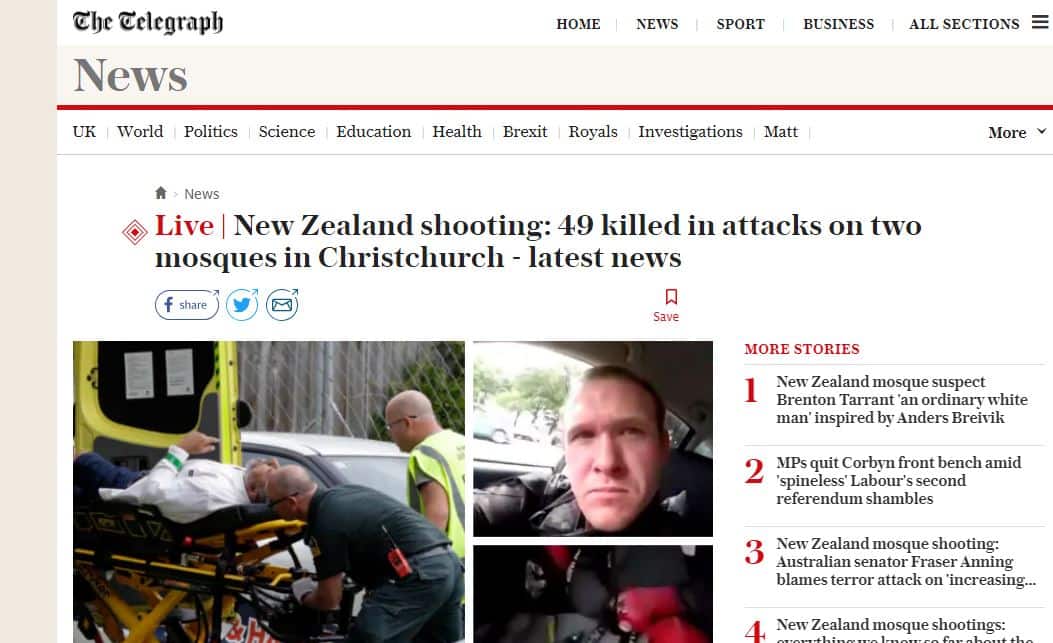 The man, who identified himself as 28-year-old Australian-born Brenton Tarrant, filmed the attack on social media. Dressed in a military-style, camouflage outfit, and carrying an automatic rifle he started randomly shooting people in the Al Noor mosque shortly after 1.40pm local time (12.40am GMT). Gunmen then opened fire at a second mosque in the suburb of Linwood, where police said there had also been multiple casualties. 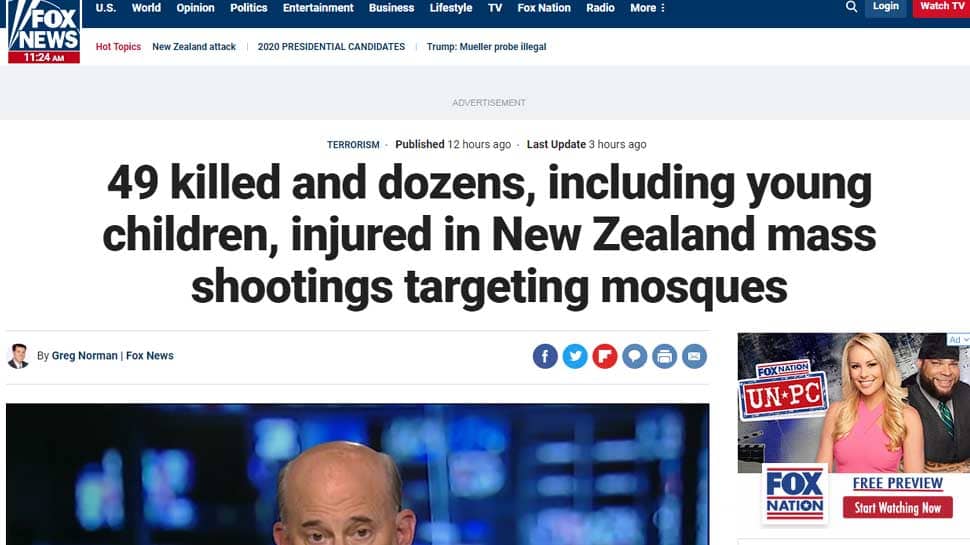 49 killed and dozens, including young children, injured in New Zealand mass shootings targeting mosques: Three people are in custody -- one of whom was charged with murder -- after at least one heavily-armed shooter mowed down Muslim worshippers at Friday prayer, massacring 49 people in two New Zealand mosques while broadcasting a horrific live stream of the terror attack.

However, some media groups called it a terrorist group

New Zealand shooting: 49 dead in terrorist attack at two mosques – live updates:  Lecturer Dr Zurinawati Mohi was near the Malaysian-Korea border en route to Hatyai for work when she was alerted to the attack by a friend, she told the New Straits Times. Her husband, Mohd Nazri Hisham Omar, 46, has lived in Christchurch with three of their children, aged 17, 13 and 9, since January.

“To get confirmation, I immediately called my husband and three children but my calls went unanswered. Not long after that, one of my kids sent me a WhatsApp message telling me their father was injured,” she said. Zurinawati, 48, said her husband was badly injured in the attack, though she did not know what his condition was in the hospital. “Our three children are safe but traumatised following what happened.” She intends to travel to New Zealand with their eldest son, 19, as soon as possible.

The coverage of the attack in the western media including those in Europe and the United States of America is in stark contrast to their reporting on similar strikes where the targets have been white nationals. On such occasions, the western media has been quick to call the attacker a terrorist and label the strike as a terror attack.

The dual-face of the western media has come to the fore even after New Zealand Prime Minister Jacinda Ardern confirmed the Christchurch Mosques carnage as terrorist attack. Still, major news portals continued to refer the attacker as a gunman.