The tragic death of the 60-year-old Dalit activist was over government’s alleged failure to regularize land tilled by a landless labourer. 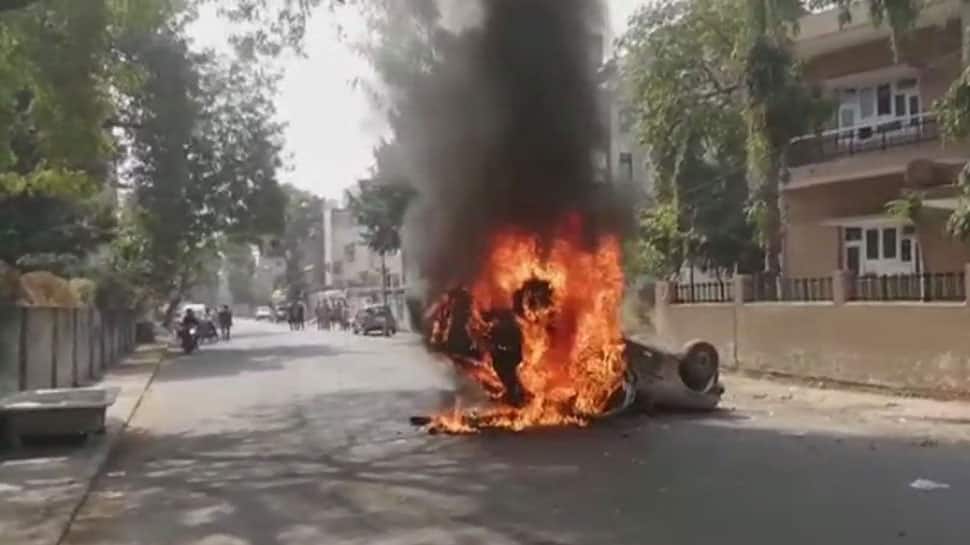 AHMEDABAD: Protests continued in several parts of Gujarat following the death of Dalit activist Bhanubhai Vankar. Agitating over his death, protesters blocked roads and held rallies. A vehicle was also torched by the protestors in the middle of a road in Ahmedabad.

The tragic death of the 60-year-old Dalit activist was over government’s alleged failure to regularize land tilled by a landless labourer.

Protesters torched a vehicle in #Gujarat's Ahmedabad agitating over death of a Dalit activist Bhanubhai Vankar on 16 Feb. Vankar had performed self-immolation on 15 Feb in Patan pic.twitter.com/NkUFa56S7Z

On Thursday, Vankar had immolated himself inside the compound of Patan Collector's office. He succumbed to his burn injuries late on Friday.

He was initially rushed to a local hospital before being moved to the Apollo Hospital in Ahmedabad.

Earlier today, Gujarat Dalit leader and independent MLA Jignesh Mevani was detained by the state police in the wake of the Ahmedabad bandh call given by him over the activist's death.

Mevani had convened Dalit protesters to converge at a statue of Dr BR Ambedkar in Sarangpur, but before he could reach the area, his car was stopped Saraspur. He was detained by the Gujarat Police to ensure no untoward incident takes place.

Another Dalit leader, Naushad Solanki, was also detained by the police. Apart from them, at least 25 members of Bhim Shakti Sena were detained to stall the bandh call.

The family of the Dalit activist, who had immolated himself, had refused to accept his body after it was brought for post-mortem to Gandhinagar civil hospital.

Hundreds of Dalit protesters had gathered outside the hospital to support the family which was demanding the setting up of a Special Investigation Team to probe the matter and re-granting of land which had been allotted to Dalits across the state but whose ownership titles had not been regularised.