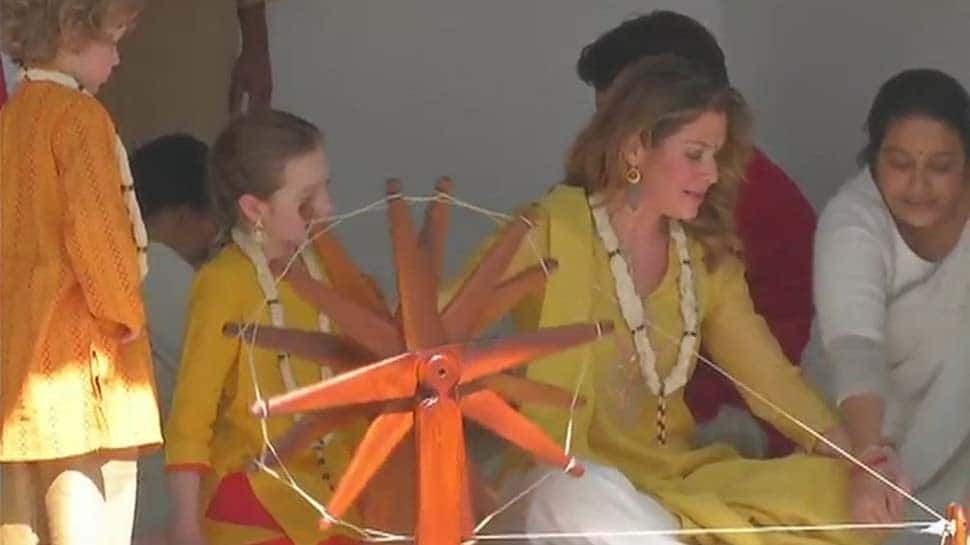 Trudeau's wife Sophie spent some time spinning thread on the charkha (spinning wheel) at the ashram.

#WATCH: Canadian PM #JustinTrudeau along with his wife Sophie and children Xavier, Hadrien & Ella-Grace at Sabarmati Ashram in Ahmedabad. pic.twitter.com/fAAK03R4k7

As Sophie learned to maneuver the spinning wheel, daughter Ella-Grace (9) sat with her mother watching everything intently. Sons Xavier and Hadrien, who also accompanied their parents, stood by their mother.

Watch: When little Trudeau ran to his father Justin at Taj Mahal

Later, the family visited the Akshardham Temple in Gandhinagar

Canadian PM #JustinTrudeau along with his wife Sophie and children Xavier, Hadrien & Ella-Grace at Akshardham Temple in Gandhinagar #Gujarat . pic.twitter.com/M7eWYLCDLh

The 46-year-old Canadian PM arrived in New Delhi on Saturday for a week-long visit on the invitation by his 'friend' Prime Minister Narendra Modi. The visit is aimed at strengthening bilateral relations between the two countries in key areas of mutual interest trade and investment, energy, science and innovation, higher education, infrastructure development, skill development and space, a statement from the Ministry of External Affairs said.

Trudeau kickstarted his India trip with a visit to Taj Mahal in Agra with his family on Sunday.