Andhra Pradesh CM has announced compensation for the kin of the victims.

Devipatnam: A tourist boat capsized in the Godavari River in Devipatnnam in East Godavari district of Andhra Pradesh on Sunday resulting in the death of at least 12 people. The death toll is likely to go up as many are still missing and a massive search for survivors is currently underway.

According to reports, the ill-fated boat was carrying at least 61 people onboard at the time of the incident.

Up till now, nearly 23 people have been rescued safely while the rescue work still continues. Andhra Pradesh Chief Minister Jagan Reddy had directed the state authorities to co-ordinate in the rescue operation. He has also announced ex gratia of Rs 10 lakh each to the families of the deceased.

The Andhra government has also stopped plying of all passengers/tourist boats with immediate effect. CM Jagan Reddy has also ordered checking of all boat permits, licences and safety measures.

Meanwhile, PM Narendra Modi has expressed grief over the incident. ''Extremely pained by the capsizing of a boat in Andhra Pradesh’s East Godavari. My thoughts are with the bereaved families. Rescue operations are currently underway at the site of the tragedy','' the PM said in a tweet.

Extremely pained by the capsizing of a boat in Andhra Pradesh’s East Godavari. My thoughts are with the bereaved families. Rescue operations are currently underway at the site of the tragedy. — Narendra Modi (@narendramodi) September 15, 2019

Home Minister Amit Shah and Defence Minister Rajnath Singh have also expressed their condolences on the tragic incident. ''Deeply anguished at the loss of precious lives due to the capsizing of a boat in East Godavari, Andhra Pradesh. My heartfelt condolences to the families of the deceased," Rajnath Singh tweeted.

As the news spread, two teams of the National Disaster Response Force (NDRF), comprising 30 members each, were rushed to the spot for rescue operations. Two SDRF teams, with 40 members, also reached the spot.

According to an official statement, CM Jagan Reddy has directed National Disaster Response Force (NDRF), Navy and ONGC helicopters to carry out the rescue operations on a war-footing.

As the floodwater in the river reduced, the authorities had accorded permission for boating in the river.

The mishap took place when the passengers were heading to Papikondalu from Gandi Pochamma temple in the tourist boat 'Royal Vasista'.

District Collector, Superintendent of Police and other government officials of irrigation and revenue departments also rushed to the mishap site in Devipanam limits in East Godavari district.

Expressing shock over the incident, TDP president N Chandrababu Naidu urged the state government to take immediate steps to save those who were on the ill-fated tourist boat.

The Chief Minister has also asked for a complete report on the incident.

According to one of the survivors, the boat first lost balance and leaned on one side before going down. ''All of a sudden, the boat flipped on one side. There was total commotion and chaos. Some of us jumped and some drowned in front of our eyes. Luckily, a boat which, was nearby, came to our rescue and the people in it pulled us up,'' recalls Dashratham, a tourist from Warangal district in Telangana who was among the group of 14. Only five could save themselves while there's no trace of others.

Ironically, state's Home Minister Mekathoti Sucharita revealed that the private boat was operating without required permits. ''The tourism department says it has not given this boat permission to ply tourists. With Godavari river in full spate where the water is approximately five lakh cusecs how did this private operator put the lives of all in danger. We will inquire into the incident and the guilty will be punished,'' the Home Minister said.

More than 200 personnel, including NDRF, SDRF along with police and revenue officials are camping at the accident site to retrieve the bodies. 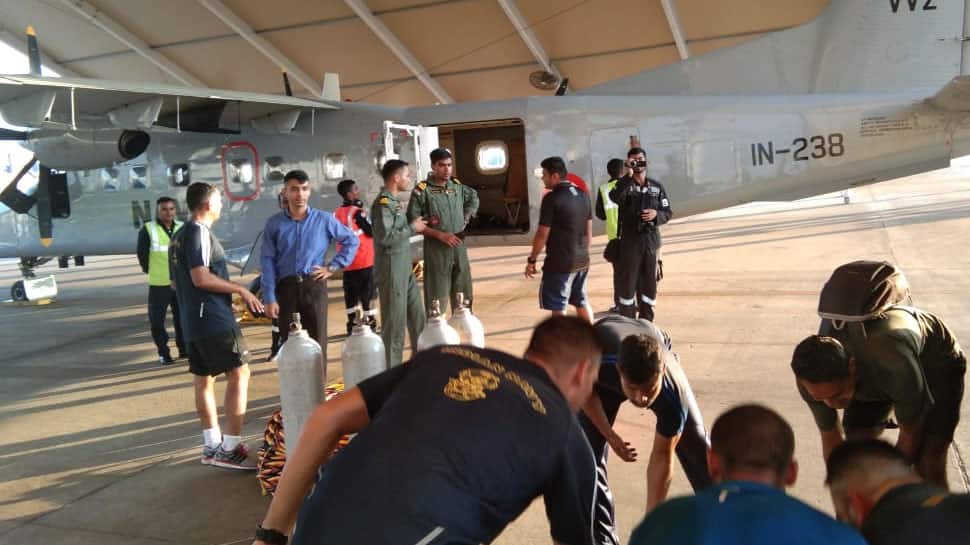 Choppers from Navy and ONGC (Oil and Natural Gas Corporation), Rajahmundry were pressed into service since the incident occurred this afternoon. Due to nightfall, the rescue operations are hampered.

Meanwhile, based on AP Government's request, the Eastern Naval Command of Indian Navy is sending a Naval Dornier along with a naval diving team, inflatable Gemini boats apart from other equipment. Two more naval helicopters will also be deployed from first light on Monday morning to join the search operations.