In a major tragedy, at least 13 people died when a tourist boat carrying 61 persons onboard overturned and capsized in the Godavari River near Devipatnam in Andhra Pradesh. 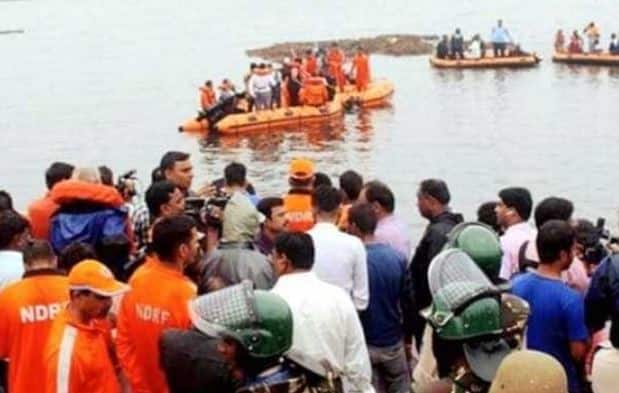 New Delhi: An Indian Navy helicopter on Monday completed a search mission and found no survivors or bodies in the aftermath of the Godavari boat tragedy. Even the debris of the boat was not sighted, the Navy said.

"A UH 3H helicopter took off from Rajmundary Airport at 7.30 am. It carried out multiple searches from the accident site at Devipatnam to Pollavaram for 3 hours and 15 minutes. No survivors or bodies were sighted as well as no debris of the boat was sighted. UH-3H landed back at 1100 hrs," the Indian Navy said. "Chetak helicopter has now taken off for next search," it added.

In a major tragedy, at least 13 people died when a tourist boat carrying 61 persons onboard overturned and capsized in the Godavari River near Devipatnam in Andhra Pradesh on Sunday afternoon, the State Disaster Management Authority (SDMA) said.

News agency IANS quoted an official saying that at least 27 people were rescued while bodies of 13 have been fished out so far and 21 survivors are 'missing'. As per IANS, the private boat was allegedly being operated without permission and survivors have claimed that the negligence by the driver led to the tragedy.

As many as 36 tourists were from Telangana, including 22 from Hyderabad. Transport Minister P. Ajay Kumar rushed to Rajamundry and met the survivors and relatives of the missing tourists.

On Monday, CM Reddy conducted an aerial survey of the boat accident site in Godavari river. Accompanied by Home Minister Sucharita, Reddy took off from Vijayawada and took the aerial survey while on his way to Rajahmundry. He is scheduled to hold a meeting with officials to review rescue and relief operations.