The agitation was also triggered by Assam Finance Minister Himanta Biswa Sarma's comment on Sunday that if the Citizenship Bill is not passed, "we will be surrendering to Jinnah's policy". 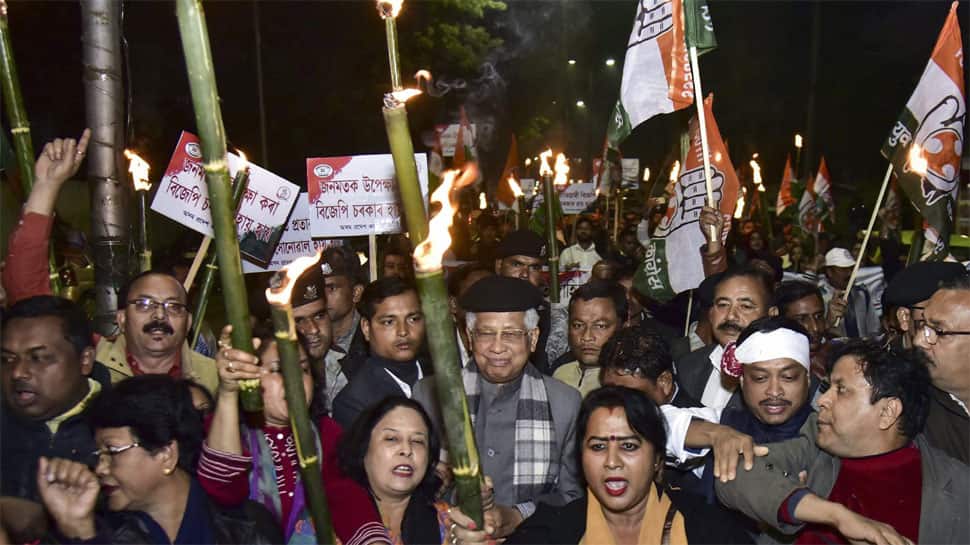 Guwahati: Protests erupted across Assam on Monday, with some agitators stripping in public, over the controversial Citizenship (Amendment) Bill and tabling of the Joint Parliamentary Committee (JPC) report on it in Parliament.

The influential All Assam Students' Union (AASU) launched a statewide protest against the bill by observing 'Black Day', with the Krishak Mukti Sangram Samiti (KMSS) and 30 ethnic organisations joining the agitation.

Leaders of the Congress, the CPI and the pro-talk ULFA faction, besides journalists, teachers and civil society groups also hit the streets with black flags and placards, shouting slogans against Prime Minister Narendra Modi and Chief Minister Sarbananda Sonowal and burning their effigies.

The Citizenship (Amendment) Bill, 2016 was introduced in the Lok Sabha to amend the Citizenship Act, 1955 to grant Indian citizenship to Hindus, Sikhs, Buddhists, Jains, Parsis and Christians, who fled religious persecution in Bangladesh, Pakistan and Afghanistan and entered India before December 31, 2014.

The JPC report on the bill was submitted in Parliament on Monday after all amendments moved by the opposition in the panel were defeated on December 31 last year.

The demonstrators burnt copies of the bill, asserting it threatened the existence of the Assamese and other ethnic people of the state, their language, culture and heritage by granting citizenship to Bangladeshis.

They also blocked rail lines at Amguri in Sibsagar district by squatting on the tracks.

The KMSS and several other allied indigenous organisations demonstrated in front of Parliament Complex, stripping naked and covering themselves with banners against the Centre's move to table the Bill.

Members of The Asom Jatiyatabadi Yuba Chatra Parishad (AJYCP), a constituent of the KMSS, staged a nude protest in Tinsukia town.

The agitation was also triggered by Assam Finance Minister Himanta Biswa Sarma's comment on Sunday that if the Citizenship Bill is not passed, "we will be surrendering to Jinnah's policy".

The AASU and KMSS leadership termed Sarma's comments as an attempt to "polarise" the Assamese society ahead of the Lok Sabha elections for "vote bank politics".

"Without that bill, we are surrendering to the philosophy of Jinnah. If those people are not there, the Sarbhog seat will go to Jinnah. Do we want that? This is a fight between Jinnah's legacy and India's legacy," Sarma had told reporters while addressing a press conference on Sunday.

Condemning the remarks, AASU general secretary Lurinjyoti Gogoi said despite being a public representative, the minister does not know how to speak to people.

"These are baseless and communal statements. He is showing fear of Muslims to get Hindu votes, but people are not fools," he told PTI.

KMSS Adviser Akhil Gogoi said: "The makers of India and the common people did not take side of Jinnah, but supported a secular country. Talking about Jinnah at this time is deliberately done to polarise the society before the polls. By doing so, he is trying to spread the communal agenda of the RSS."

Meanwhile, the AASU and the North East Students Organisation (NESO) have separately called an 11-hour Assam Bandh and North East bandh, respectively, on Tuesday to protest against the bill.

The KMSS, along with other allied groups have announced an economic blockade from Wednesday.

Addressing an election rally at Silchar on January 4, Prime Minister Modi had announced that the Citizenship (Amendment) Bill, 2016 will be passed as soon as possible in Parliament as a penance for past injustices.