The Election Commission on Saturday rejected Congress' claim alleging Maharashtra Chief Minister Devendra Fadnavis was invalid and said that the affidavit has been approved.

Mumbai: The Election Commission on Saturday rejected Congress' claim alleging Maharashtra Chief Minister Devendra Fadnavis was invalid and said that the affidavit has been approved.

Earlier on Saturday, former BJP MLA Ashish Deshmukh who has been fielded against Devendra Fadnavis by the Congress claimed that the notary stamp used on Fadnavis' affidavit has expired, as it was dated December 28, 2018. 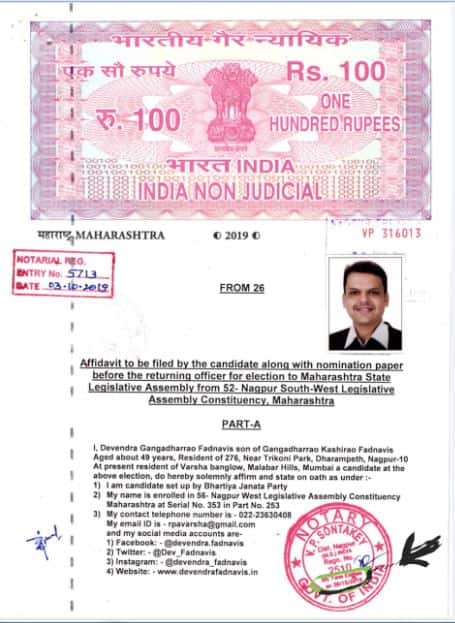 Deshmukh had demanded that the "candidature of CM Fadnavis be cancelled" while alleging that the affidavit submitted was invalid.

To present the side of CM Fadnavis, representatives Sandeep Joshi, advocate Uday Dabble and Parijat Pandey appeared before the Returning Officer and accepted that the notary stamp was old. They further informed the Returning Officer of Nagpur South West assembly seat that the term for the validity of the notary stamp used was extended by five years and produced documents to validate the same.

Rejecting Congress' claims, the Election Commission officer of Nagpur South West assembly seat from where both Deshmukh and Fadnavis are contesting on Congress and BJP ticket respectively, said that CM Fadnavis' nomination form was valid after taking cognizance of the documents produced by CM Fadnavis' representatives.

Congress has said that they will challenge Returning Officer's decision in the court.

On the same day, Ashish Deshmukh filed his nomination from a Congress ticket for Nagpur South West seat. Deshmukh, earlier a BJP leader, was elected from the Katol Assembly seat from BJP in the year 2014. However, he had resigned from the saffron party in October 2018.

Maharashtra will go for polls on October 21, along with Haryana. The results of the Assembly election will be announced on October 24.