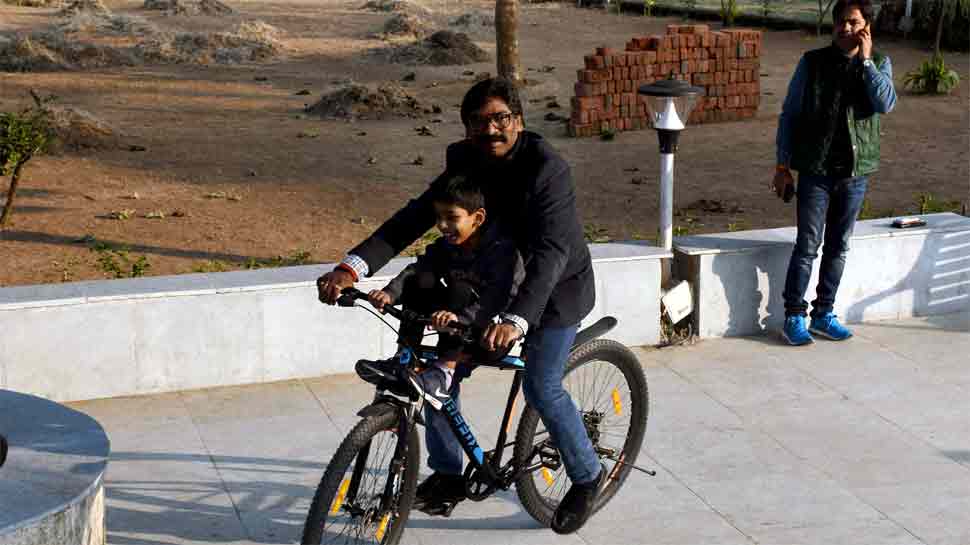 New Delhi: It's a big day for Jharkhand Mukti Morcha (JMM) chief Hemant Soren as the 45-year-old leader led his party along with alliance partners Congress and Rashtriya Janata Dal (RJD) to a big win in Assembly election 2019 whose result was declared on Monday. The alliance won 46 seats, five more than the number required to form government in the state which has an 81-member Assembly.

Apart from powering his alliance, Hemant Soren also emerged as the winner from both Dumka and Barhait constituencies. Soren won by a margin of 13,188 votes from Dumka and secured Barhait assembly constituency by a margin of 25,740 votes. The chief minister candidate from the mahagathbandhan beat BJP's Simon Malto in Barhait, while on the Dumka seat he defeated BJP's Lois Marandi, who was a minister in the Das government. While JMM was the single largest part with 30 seats, Congress won 15 and RJD bagged one.

Soren and his partners kept the campaign confined to local and economic issues like Santhal Pargana Tenancy (SPT) and Chotanagpur Tenancy Act (CNT) while the BJP banked too much on big national issues in the form of abrogation of Article 370 from Jammu and Kashmir, Citizenship Act and ram Mandir in Ayodhya.

The clear mandate in Jharkhand Assembly election for JMM-Congress-RJD alliance came at the cost of the Bharatiya Janata Party (BJP) led by Chief Minister Raghubar Das, which faced a massive defeat bowing out of power with only 25 seats in its kitty. Das, too, was staring at imminent defeat in Jamshedpur East with over 15,000 votes and resigned from his post without waiting for the formal declaration. Das had been winning from Jamshedpur East since 1995 when Jharkhand was part of Bihar.

Das, who handed over his resignation to Governor Draupadi Murmu at Raj Bhavan on Monday evening, was the first non-tribal chief minister in the tribal-dominated state.

Talking to the media after it became clear that his alliance had won the election, Hemant Soren dedicated his victory to the people of the state and also thanked Congress and RJD for reposing faith in him. Soren said, "I thank Guruji (father Shibu Soren), Laluji and Soniaji, Rahulji, Priyankaji and all those leaders who reposed their faith and trust in me." He also added that a new chapter had started in the state.

"It would be a milestone for the state, and all the promises made to the people would be fulfilled. We will sit with the alliance partners and decide the next course of action," he said.

Prime Minister Narendra Modi also congratulated Soren which was reciprocated by the latter. "Congratulations to @HemantSorenJMM ji and the JMM-led alliance for the victory in the Jharkhand polls. Best wishes to them in serving the state" tweeted Modi.