Ahead of the second phase of assembly polls, scheduled to take place on December 7,  Rahul Gandhi said raised the matter of tribal land acquisition, Rahul Gandhi said that wherever the BJP government is voted to power, they take away lands from tribals and give it to industrialists without even asking them. 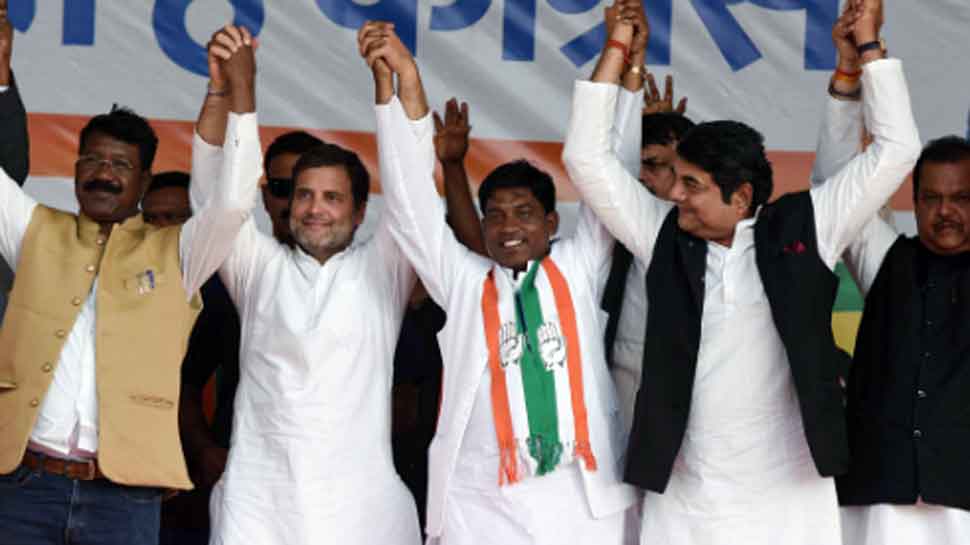 Simdega: Rahul Gandhi said that loans of farmers in Jharkhand will be waived the same way as it was done in Chhattisgarh if Congress comes to power while addressing a rally in Simdega on Monday (December 2). Campaigning for Congress candidate from Kolebira, Rahul promised to work for the welfare of farmers and tribals of the state.

Ahead of the second phase of assembly polls, scheduled to take place on December 7, Gandhi said, "Chhattisgarh is a live example for you to see how the Congress government has helped farmers and tribal people get what they deserved," adding "The loans of the farmers of Jharkhand will be waived the same way as it was done in Chhattisgarh if Congress comes to power."

Raising the matter of tribal land acquisition, Rahul Gandhi said, "Wherever the BJP government is voted to power, they have taken away the land from tribals and give it to industrialists without even asking them."

"When the Congress government was formed in Chhattisgarh, we took back the land from Tata and returned the land to tribal people. If the tribal land is taken and the industry is not set up within five years, the land needs to be returned to the real owners," said the former Congress party chief, who was accompanied by the state in-charge RPN Singh and Jharkhand Congress chief Rameshwar Oraon.

He assured the people that if Congress government is voted to power they will help fight unemployment in the state, and added that the government will give equal representation to all section of people and work towards the welfare of poor, farmers and tribals in the state.

Questioning Prime Minister Narendra Modi and CM Raghubar Das, he said, "Our PM and CM are every time seen talking about providing employment but did the poor actually got any?"

Meanwhile, BJP leader CP Singh mocked Rahul Gandhi, saying "People have understood Rahul Gandhi well. When he was not able to bring any impact to the entire country, what will he do to Jharkhand."

Notably, the first phase of the Jharkhand election was held on November 30 with around 64.44 per cent of voters turn out in 13 constituencies of six districts - Chatra, Palamu, Gumla, Garhwa, Latehar, and Lohardagga.

The second phase of the election is scheduled to take place on December 7.

The 81-member Jharkhand assembly election is being held in five phases between November 30 and December 20 and the results will be declared on December 23.